The Birth-Day Story of Sofia Koay.

It felt like forever for her to reach one month and for us to finally bring her out and about. Maybe because it is tougher to stay home with her (and our firstborn almost-toddler) for an entire month. I crave to go out and I did but not for long because of breastfeeding - yes this time I am going to do it for at least 6-months. All the best, me. Heh. 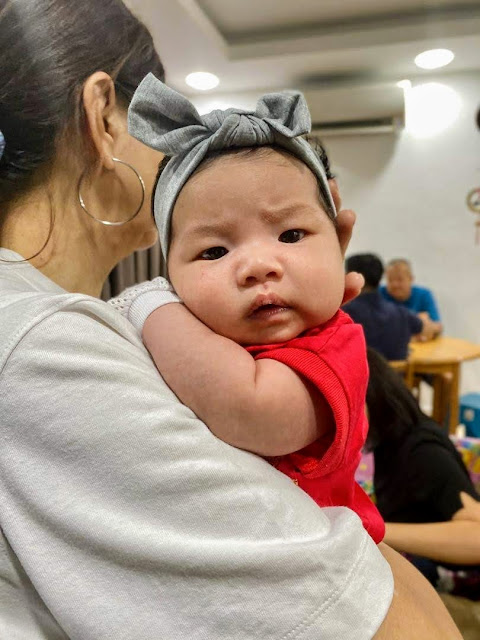 Anyways, both Adrian and myself are beyond thankful that Sofia is an easier newborn compared to when Alex was a newborn. He had colic and would cry whole night - refusing milk and everything. Sofia on the other hand, loves drinking milk (obsessed with latching on hah) and do not have colic - so we never had to deal with that kind of stress.

Also, both of them did not have jaundice (we prayed really hard since we found out about the pregnancies) even though we were told by doctors and nurses that people with type O blood has the highest risk of their baby having jaundice. Oh wells.

Okay - so let's get to the birth-day story of our second-born, Sofia Koay.

Oh wait - here is the link to Alex's birth-day story if you did not already read it. Heh.

Many people shared with me that usually second pregnancies right - the baby will come out earlier than the first pregnancy. So we were sort of prepared to have her make her grand exit earlier. But this girl - drama like the mother - did not come out earlier. Or on the expected date of arrival.

Okay maybe before that, I should pen down which hospital we decided to go to in the end because that will  lead the decisions made after that and all.

When we first found out that we got pregnant again earlier of 2019, we waited till about 2 months before making an appointment to see Dr Soon at Adventist Hospital. Then, we were also making appointments to the Klinik Kesihatan.

When we were with Dr Soon, he was telling us that the second birth will most likely be a c-section also since the first one is of that. We were a bit bummed out when he told us because I wanted to try for natural birth this round - after experiencing such a long recovery with the first birth. But when we visited the Klinik Kesihatan which then referred us to GH for few more visits, we were told that we can try for a natural birth first and if really cannot, then a c-section will be performed.

To cut the story short, we decided to deliver this baby at Penang General Hospital because they let us go for natural birth - in fact they encouraged natural birth. With Dr Soon, he was like 90% leaning towards c-section already so we kinda stopped visiting him towards the end of the pregnancy.

The expected date for Sofia to come out (at week 40) was on 16 December but there were no signs of her wanting to come out so when we visited my gynae at KK, she gave us another week (max) and if still no signs, then I will have to be induced on 23 Dec (so close to Christmas oh my).

With everyone around me sharing on how being induced is another level of pain itself, I was scared. I was so reluctant to be induced and really prayed so hard (thank you to those who prayed alongside us!), that Sofia will come out naturally before 23 Dec and without having to be induced. 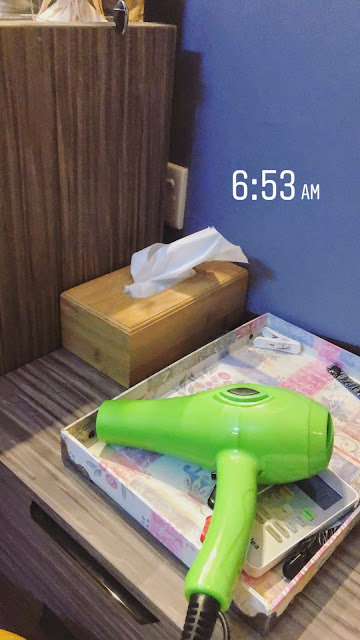 Then Sunday (22 Dec) comes and I was supposed to check into GH already to get prepared for next day's induce procedure and all. BUT SOMETHING HAPPENED!

On that very Sunday at 630AM as I was waking up to get ready for the check-in, I felt the first wave of contraction and I was like, 'Yes!' 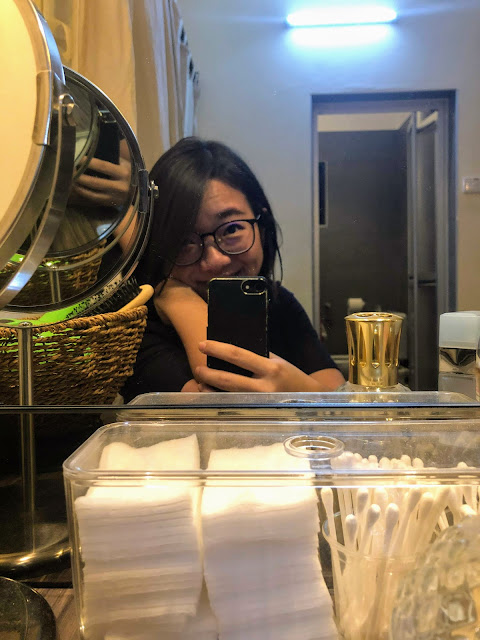 Then, came the second and third and before I know it, the contractions kept coming. That's when we know that Sofia is going to come out today and that also means NO NEED TO BE INDUCED! We were celebrating so hard on our way to the hospital. Prayer answered!

It was already about 8AM by the time we reached the hospital. I was asked to enter the examination room alone (no spouse allowed) and there, I changed into the hospital gown and doctor (and 3 housemen) checked and I was about 4cm dilated.

Soon after that, I was asked to go into the maternity ward (accompanied by the mister) and got myself a bed by the window with a view of the carpark (oklah, quite a win). By then, more MOs and Housemen came and checked. 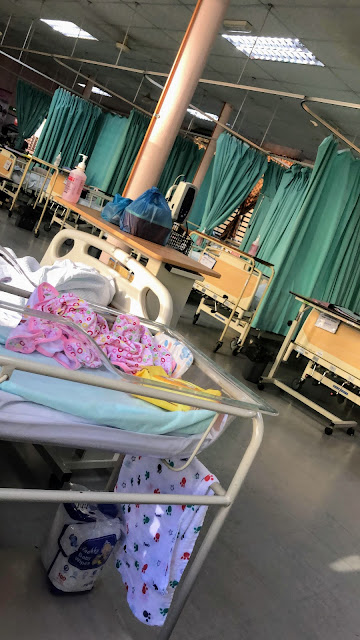 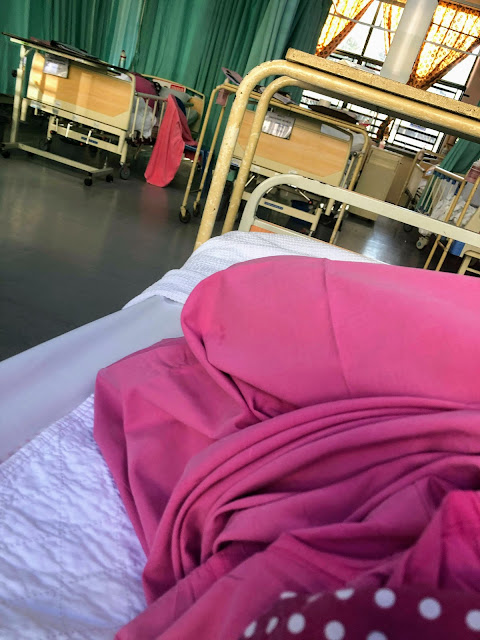 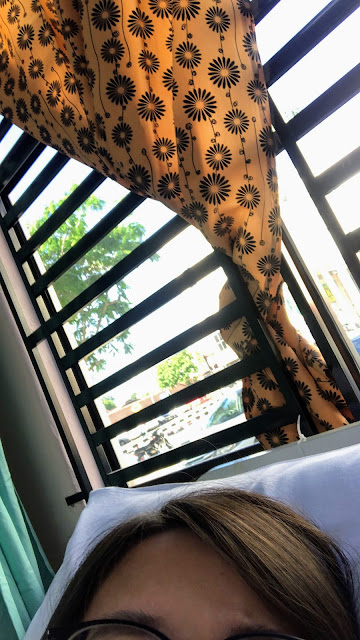 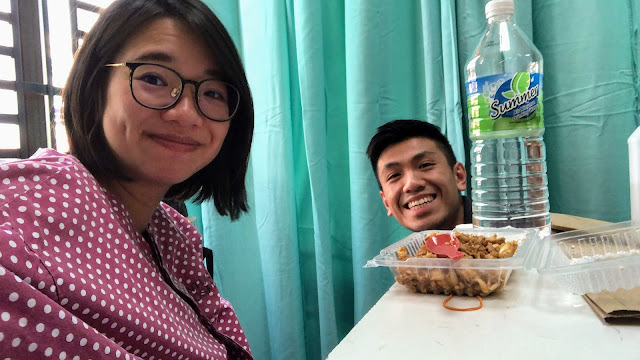 Since there were nothing much left to do except for waiting, Adrian left the hospital and went to church for the Christmas Celebration Service and I tried to catch some sleep. It was hard because the contractions were becoming more often and the pain was slowly becoming even pain-er (heh).

When Adrian came back at about 1PM (I think), we asked for one of the doctor to come and check the dilation because the contractions were becoming crazier. I was 6cm dilated and the doctor immediately did the necessary to get me wheeled to the labor room (located at another building).

Adrian was not allowed into the labor ward so he waited outside and I was inside (along with another mother in labor). Different doctors and housemen came and check (it is a training hospital afterall - no idea how many people looked at my ahem already to be honest, heh). 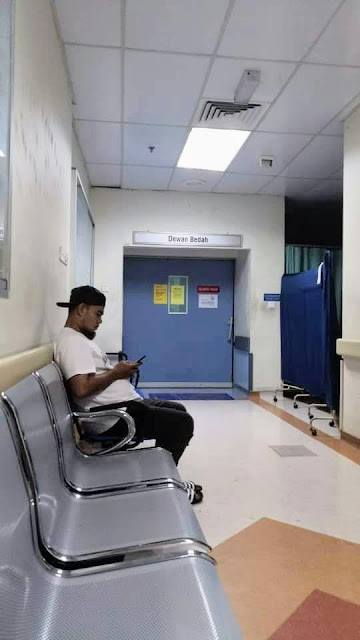 One of the houseman (got to know that his name is Leonard at the end) was supposed to break the water bag but he tried 2 times and failed (and I some more cheered him on because everytime he goes into my vajayjay, it hurts like mad so I actually do want him to succeed in breaking that water bag!) - but nope - so the MO/Specialist (not sure which one) came and did it while teaching him.

Anyways, by then it was too late to get epidural so I had no choice but to endure the rest of the labor till 10cm dilated.

I remembered not long after that, I was already pushing with every contraction that came because it's just it. I cannot NOT push if you know what I mean. It felt like I was taking the biggest poop of my life. I legit asked the nurses to check if any poop came out because I pushed so many times and so hard. The steel on my bedside probably got dented too.

When one of the nurse came to check, she showed a slight-panicked face and told the rest of her crew to bring over the cart or whatsoever! She said, "Baby dah nak keluar dah!"

She went on and commented that I was a good pusher. Ahem. Heh.

Then I remembered seeing Leonard rushed to my bed and more nurses came and everyone counted with me and asked me to push and all. And guess what. The main midwife/nurse even asked if I want to hold and pull the baby out myself when her upper half is out.

I said, "NO THANK YOU!" - I was in a slight panic mode I think. Thinking back, I should have done it. Ish.

Guess what one more time.

I CLOSED MY EYES THROUGHOUT THE ENTIRE BIRTH EXPERIENCE.

Yep, I saw the nurse took a pair of scissors out and that's it. Eyes closed till after baby is out.

I felt two snips and pushed some more and then before I know it, Sofia finally came out and was crying loudly - not as loud as when Alex were out though.

"A very healthy baby girl" - so I heard.

The nurses continued to get the placenta out and did the stitches and all. I felt the stitching because I had some extra tear apparently so when she was stitching up the outer part of it, I was in absolute pain but Sofia was on me already at that time, so I just focused on her. 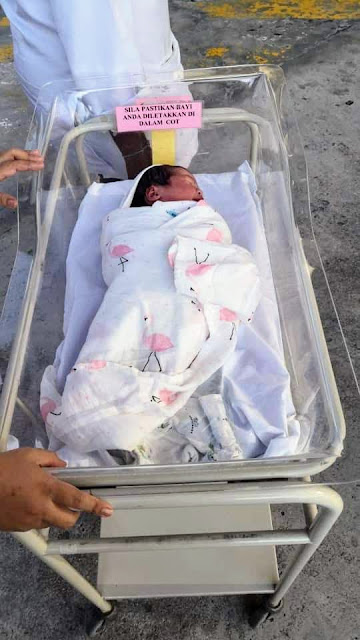 By 5pm-ish, I was back to the maternity ward and by 630pm, I was walking around and sitting up already. Natural birth has got its benefits for sure.

I spent the night there alone with Sofia by my side (baby stays with mommy the entire time at GH) and got discharged the next day at 3pm. It was really such a quick birth experience compared to the one we had with Alex. Super thankful that both Sofia and I did not have to stay longer than a night because I was still too tired (physically) and having to care and feed Sofia all by myself in the hospital was hard. 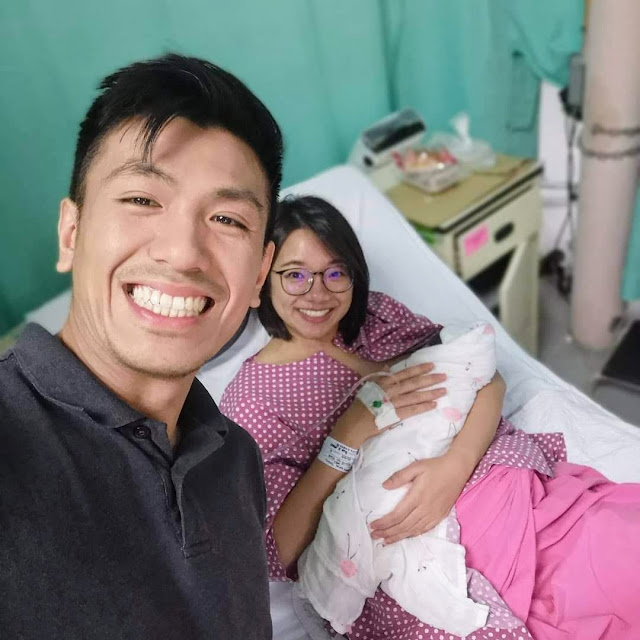 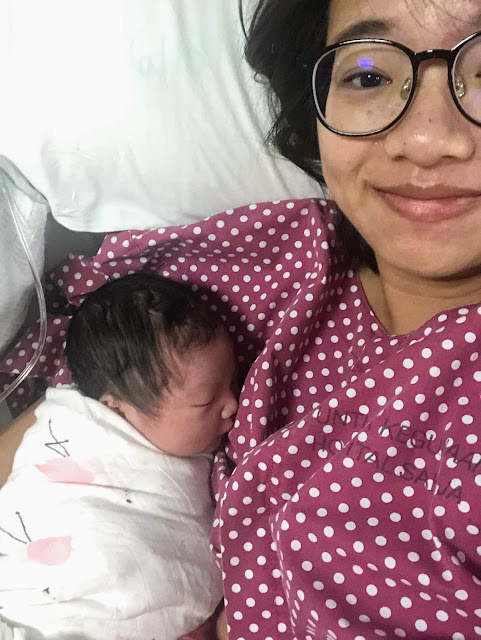 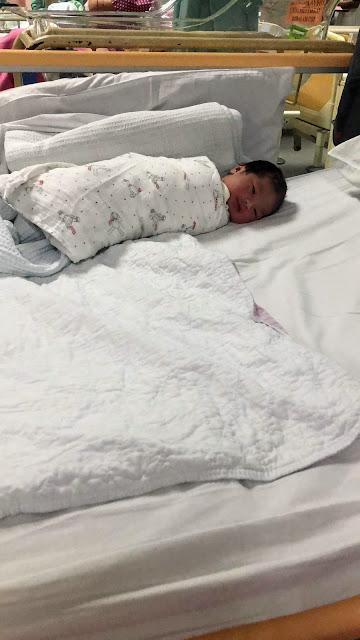 Now, one of the most frequently asked question on this entire birth experience is how much did it cost to give birth at Penang General Hospital.

We paid a total of RM33 for natural birth (no epidural) two days one night stay at Penang GH!

Cheaper than my monthly phone bill what is this.

I thought it would probably costs like RM100 or something - but when Adrian told me the price, my jaw dropped, really.

When we did the c-section procedure to bring Alex out at Adventist Hospital, it costs us RM11,000!

Yep, you see that right.

Although it is not the same kind of birth procedure, but I am sure that at GH, it will probably cost less than RM300 for a c-section.

Private hospitals are over-charging wei - I cannot even.

So much win for the second-born please.

So, that's how Sofia made us a family of four - and as much as we would like to extend the family tree, we will be taking at least 2 years for the uterus to heal before number three happens.

If I can choose one thing that I kinda have a love-hate-feeling towards about Penang GH is that they are very strict on the visiting hours.

What I don't like is that they only limit maximum of 2 people to go in the ward during the visiting hours. TWO PEOPLE. Hello, my dad, mom and sister also 3 people liau. Plus husband somemore.

So because of this restriction, ended up nobody came to visit me in the hospital except for my husband and my sister. Heh. Also because I stayed a night only also la.

Good point is because of this restriction, mothers can rest and heal - sort of. So this is kinda like a good thing. Really love-hate feeling on this.

Anyways, we cannot thank all of you enough for keeping us in your prayers - be it during the pregnancy and after Sofia came out. Thank you for all your prayers, gifts, and encouragements. It is very possible that I may have forgotten to thank you personally but please know that we appreciate all of it.

Also, this round we decided to give Ayamas Full Moon Set Package instead of the usual yellow rice with curry chicken. For Alex, we gave cupcakes and muffins kind of set. 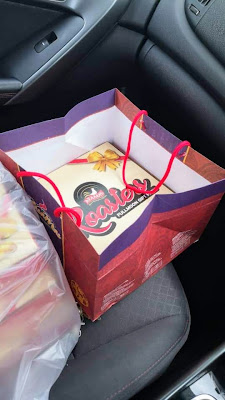 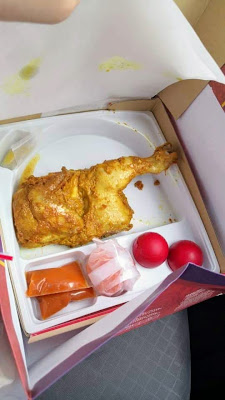 We have received many comments from you guys that the Ayamas chicken was really yummy and we felt that it's really value for money - half chicken (flavor: percik) with 2 eggs and 2 angkus.

So, thank you again for all your blessings to our little girl.

Everyone, meet our second-born. 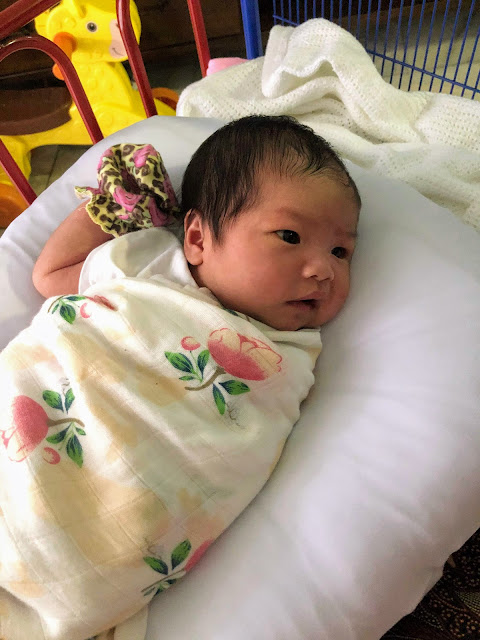 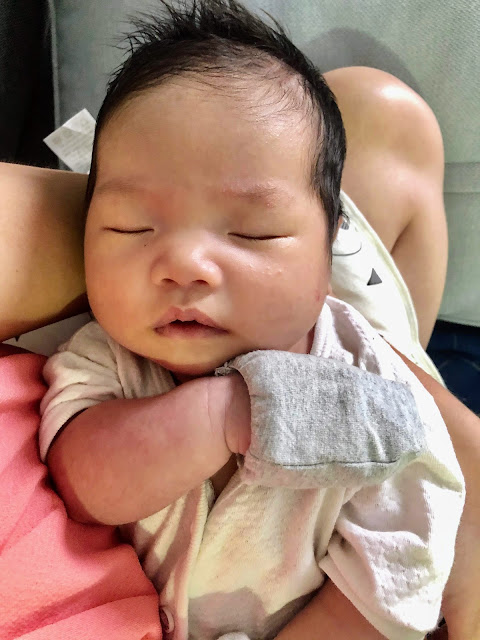 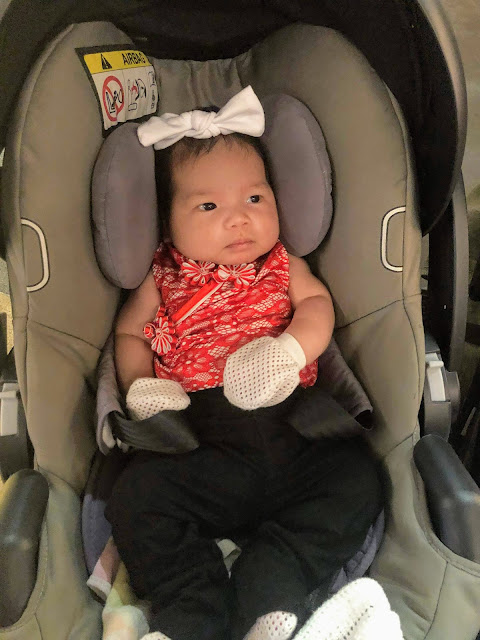