A Little Update on Baby #2.

We enter third trimester as of this week.

Looking back at how we are sure that we want to get pregnant THIS fast after the first one, we are still sure now but to be honest, I have had episodes where I asked myself if it is a wise thing to do - to my body especially.

I don't feel like I am stronger physically after the first birth and sometimes I feel like I should have taken a longer break/rest before getting my body go through major changes again - not to mention the hormonal part of it.

But I really want our kids to be close in age gap.

For now, I feel great (physically) - most of the time la actually.

Some days are not good days where every part of my body hurts and I feel like it has been a long day even though I just got up from my bed in the morning. It's like my body didn't even really sleep at night. There are rough days (a lot of which I think will be coming in this third trimester), but there are also a lot of good days when she would wake up at random hours and kick and move so much it's as though she is trying to find her way out - but I know inside for sure more comfortable since she's all cuddled up and warm and all.

Few days back, I started having acid reflux and heartburn - something that I have not gotten when pregnant with Alex. So it was something totally strange and new to me. Didn't know how to react to it to be honest other than getting angry easily (at Koay most of the time) because it was just so frustrating.

Googled for some relief methods and what seemed to work were taking Gaviscon and apple cider vinegar after meals - but I was reluctant because I didn't want to rely on those 2. The other way was eating small portions but have it more frequent and eat/drink slowly.

I was having trouble getting used to it because I got hungry and when I got hungry, I just want to finish a full meal without having to break them up into few sessions (if you know what I mean).

Like one night during dinner, I could only have a small bowl of mushroom soup for dinner because I just could not swallow without feeling like its going to come up again. So, that was what I had for dinner - mushroom soup and a few pieces of cut grilled chicken. I went to bed hungry and got up the next morning had light breakfast and then 2 hours later, I was looking for snacks again - not healthy kind of snacks some more.

Not to mention that when these episodes were here, I was sleeping in a sitting position on my bed - next to a sleeping adult and a baby. I was furious inside. Heh.

I was hungry and tired.

So, those are the rough days where I secretly wished that baby is already here and my body doesn't have to endure such torture.

Now, I am thankful that I no longer have acid reflux or heartburn (for now I believe) and I can finally finish a bowl of koay teow th'ng during lunch.

Backaches are expected so I don't have much to complain about it since I already have them during the first time - however when I lie down, the lower part of my body hurts so bad I always have to "grr" when I switch sides.

There was one day when I had finally found the perfect position where the back does not hurt, the lower part is not hurting also and baby girl is not kicking on that side and then, my alarm sounded. MY ALARM CAME ON AND IT WAS TIME TO WAKE UP.

You don't want to imagine my face at that time!

Well, other than all of that - baby girl has been great. Growing well and according to her number of weeks inside me. The latest doctor's visit - I managed to see all her fingers and toes, details of her brain, heart and her valves and all that stuff, her private (confirm she's a girl ya - no surprises on day of delivery please), her kidneys even, her spine, her belly and the placenta and all.

Saw everything except her face.

Can you believe it?

She was covering them the entire time. She was moving a lot during the scan so Dr Soon sort of just waited for her to move her hands so that we could get a photo of her face, but nope. When her right hand is down, her left is up and it went on for a good 3-minutes until we gave up. Hah.

That was one expensive scan - RM293 maybe because it was a detailed scan so that's why more pricey. Usually it will be around RM150 or so.

Anyways, it was good to see her on the screen after so many weeks.

3 more months till we get to hold this one and have sleepless nights again (boo to this part ya) but we are really looking forward to becoming a family of four - don't know what it's going to be like but well, we're ready (I think) so let's do this, 2019.

2020 is another story altogether.

Till next time, bye now.
By Sarah Khoo
Labels: Parenthood

We never did a gender reveal party with Alex and I have never thought of doing one with this one - until Andrew mentioned it and I was like, "Ons!"

With Alex, we did a monthly photo bump update and none with our number two - sudah lazy I guess. Heh. So we thought it would be nice to have a gender reveal party for our second baby.

We told Dr Soon to write the gender on a piece of paper and he did. Initially, we were doubtful if he could confirm confirm see the gender at chun-chun 5-months mark, but he was quite sure - which then led Adrian to believe that our second baby is a boy. Because nothing is as sure as if he sees a penis right? 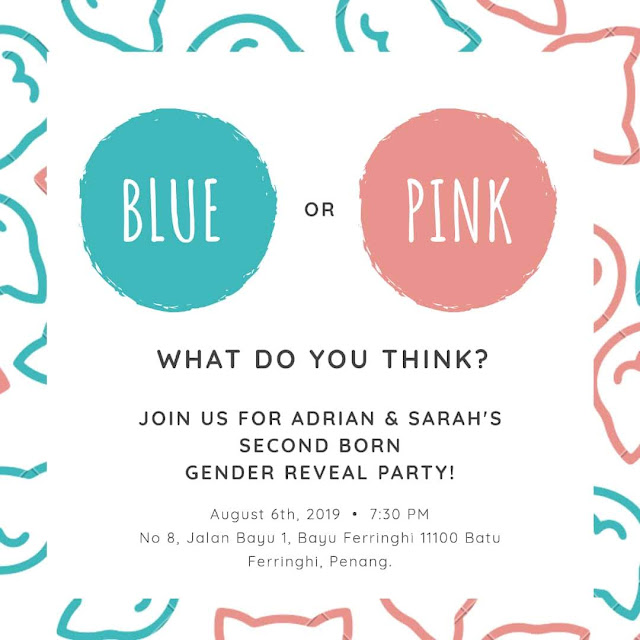 So, Adrian managed to somehow convinced me that we are going to have another boy although I felt so strongly that this baby gonna be a girl.

We passed the paper to them organizers (heh) and they went ahead and planned for a pot-bless party at Andrew's crib. I was super excited - I really just needed to know. 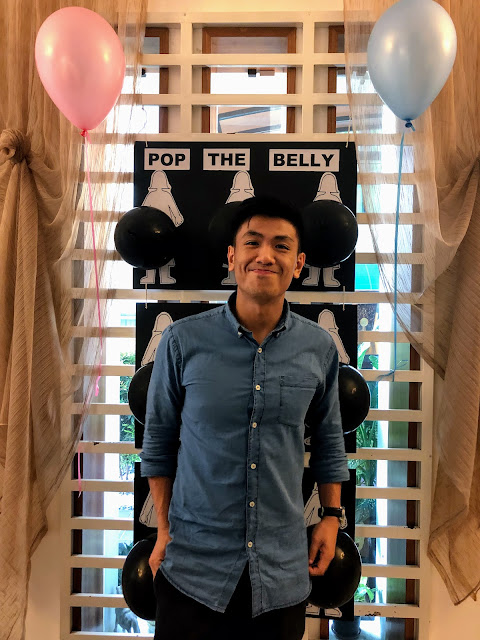 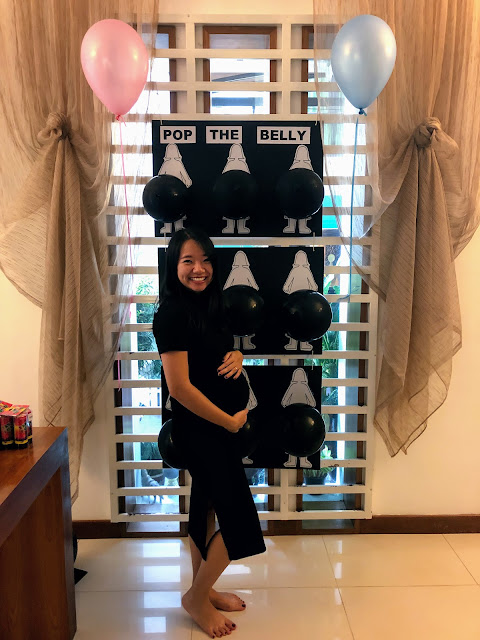 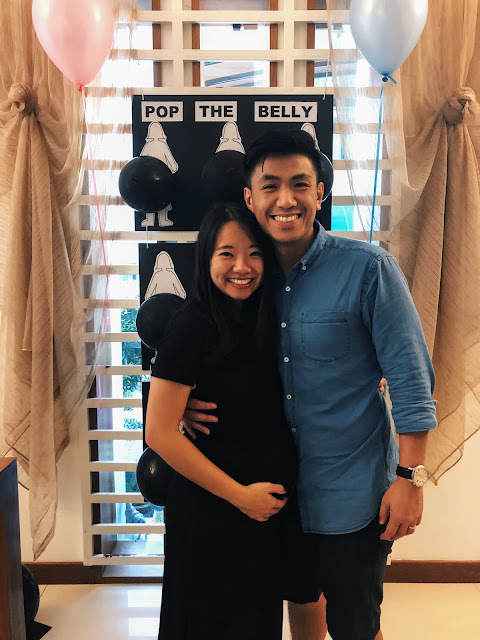 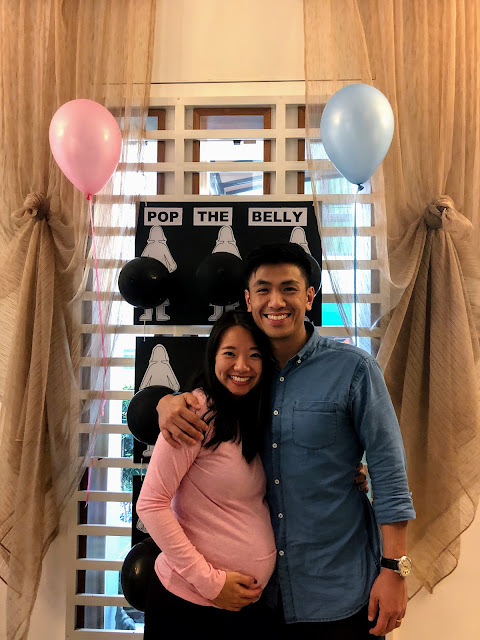 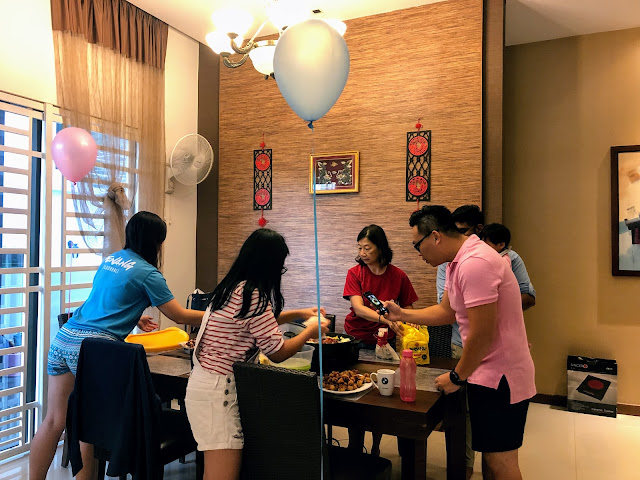 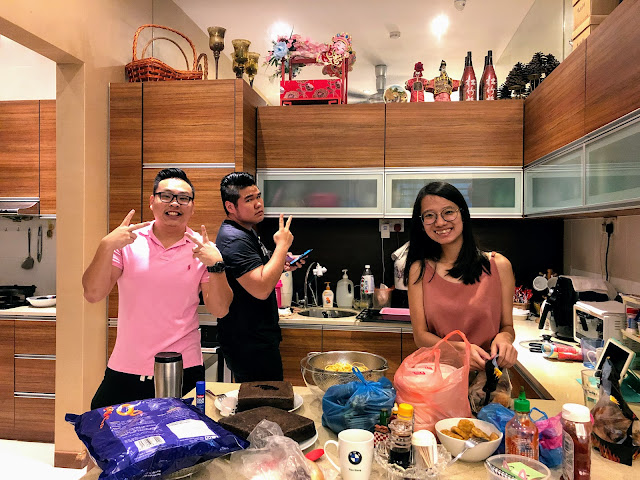 We ate, talked, played some games and then they blindfolded us and sat us down.

We had no clue how it was going to be revealed to us so the suspense was definitely there.

When we were asked to open our blindfolds, there Alex was - sitting on the floor, holding a pink balloon, and changed into all pink-clothes. 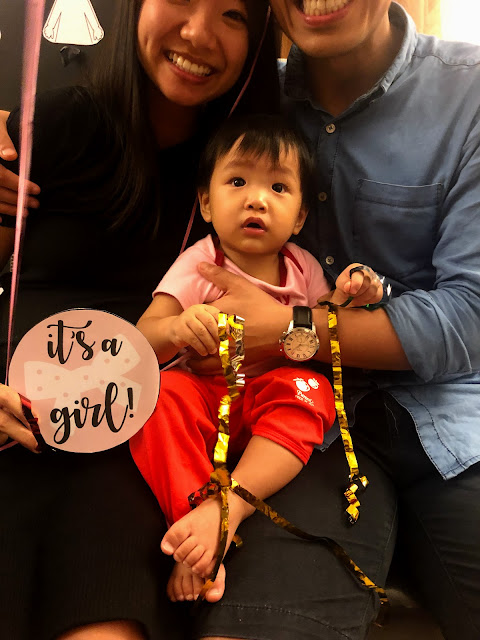 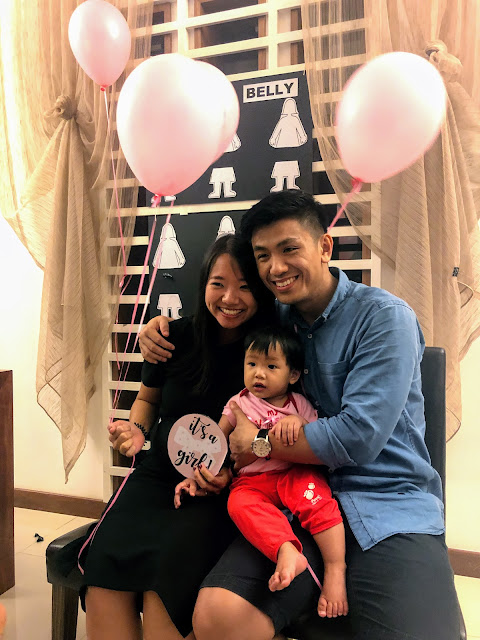 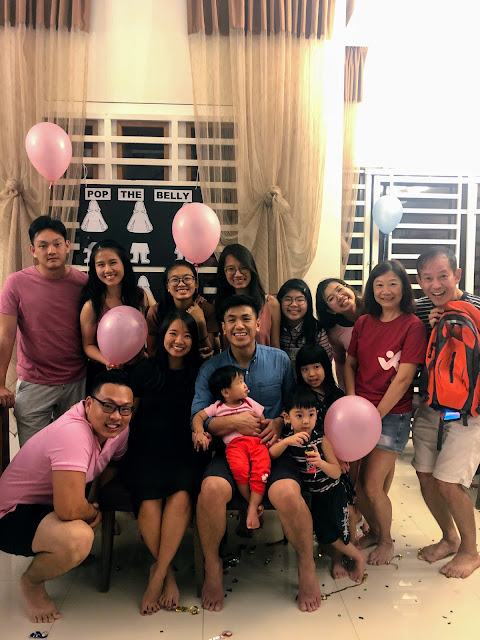 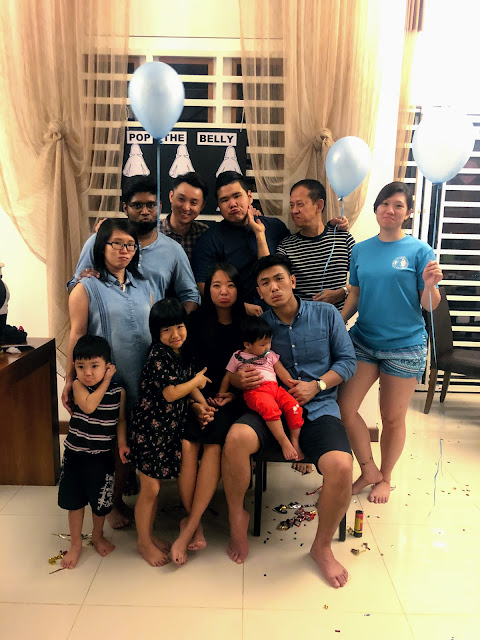 That moment, my heart stopped. Our hearts stopped. We held back some tears.

And I believe that's partly because we get to find out the gender alongside with our family and closest friends who are like family themselves. So, it was really nice and warm.

WE'RE HAVING A GIRL YOU GUYS!!

Now, let's just try to let that sink in a while! We still take a moment on some nights before we sleep to let it sink that we gonna have a girl - very surreal.

I remembered when we were driving home that night, we listened to our wedding song, "Beautiful in White" and when a part of the song that says, "And if our daughter's what our future holds, I'll walk her down the aisle, she'll look so beautiful in white".. Adrian started tearing up (again).

He was still trying to wrap his head on the fact that he is going to have a little girl in his arms in few months' time! It was insane.

Thank you guys for making this a really special moment for Adrian and myself - it was a party we never knew we needed until we got one. Looks like our baby #3 and #4 also will have a gender reveal party yeah? :) 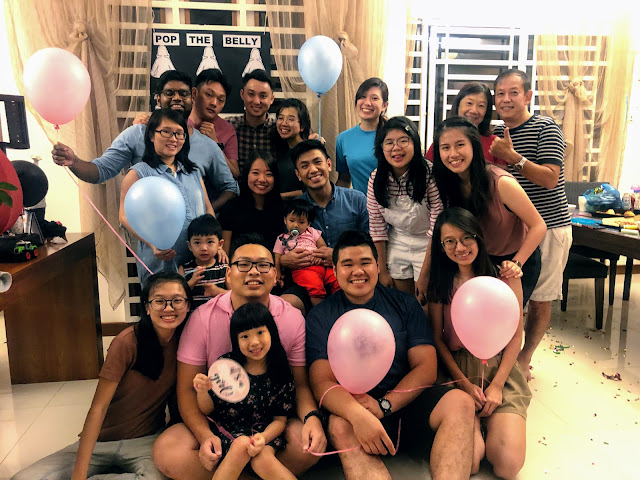 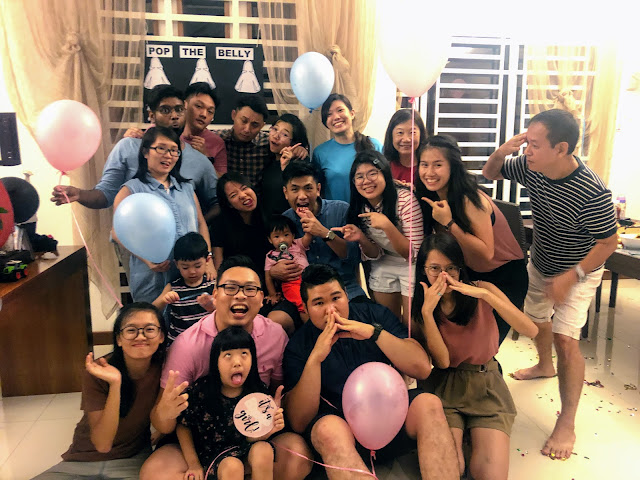 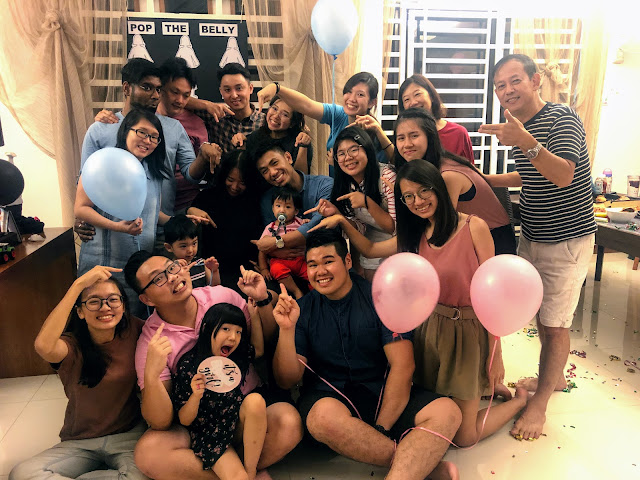 And yes, we have decided on her name (not the chinese name yet tho - this part very tricky) and we will share soon for sure.

For now, we are just counting down till we get to see this little girl's face and hold her in our arms and welcome her to the world. Will she be as loud as Alex the moment she comes out? Guess we will have to wait and see.

As of today, when we ask Alex, where is baby S, he would move to my belly and pat it and then kiss it. It's really nice.