Motherhood in One Word (For Me). 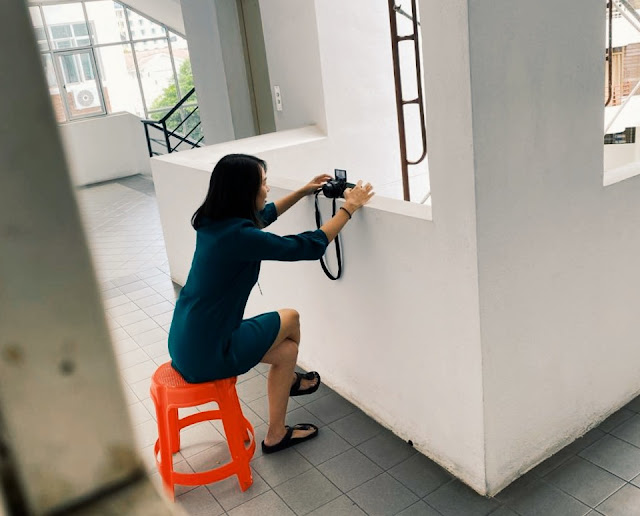 So, recently I was asked by my church to share on what motherhood is to me (and how does having Jesus in my life helped) and I did.

I wrote the below for script and spent about one & a half hours talking to myself in front of the camera. It was intense. I had to go to a place that is quiet (which is obviously impossible with the children at home), and with "proper" background. I also had to record at a place where no cars or bikes can be heard.

So, I chose to do it just outside my parents' place. If you listen carefully, at the end of the video, you can actually hear Sofia.

Towards the end of it, I was sweating buckets (thankful it didn't really show in the video except for a shiny face heh). There were a lot of retakes because cars and bikes were driving by, our neighbor decided to wash like gazillions of plates and I forgot what I wanted to say. The camera was fully-charged okay when I first started.

Then, when the battery was left with 19%, I was like, "Game on!" because I do not have any other time to record video so this has to be it.

At the end, I decided to record it to three parts which was a lot easier than recording at one full take. I also did not really follow my "script" because I didn't want to read from it and record. I had to be a little bit spontaneous ma right.

So yeah. I had fun doing this video because it sort of allows me to think of what motherhood is to me and what it has done to me (all good things).

What is motherhood to you, I wonder. Everyone for sure has different definition of what motherhood is to them.

First, let me just wish all beautiful mothers and mothers to be out there - Blessed Mothers Day!

If I can choose one word that summarizes what motherhood is to me - it would be SACRIFICE.

BEING A MOM IS THE ULTIMATE SACRIFICE.

We basically put our life on hold just so we can live theirs with them.

I struggled with that the most I think. When I became a mother, I felt that I had to give up more "things" compared to my husband. I don't know about you, but I immediately felt the need to "even-out" the sacrifices.

I felt that it was unfair that I had to sacrifice so many things (going out with my friends at night, hang out in the cafe or go watch a movie etc) and, it seems like he still gets to enjoy his daily activities.

You know sometimes when I know I am not going to win in a debate/an argument, I will usually just casually say, "You know, I did gave birth to not 1, but 2 babies for you" HAHHA.

I know it is wrong to be like this. Haha.

Anyways, it was rough motherhood for me at first.

But I was reminded of how Jesus sacrificed everything for us. How He also basically gave up his life just so we can live ours? I mean he died for us - like really literally die die..

When I look at just that, I think to myself - I don't even have to die for my children. I just need to put my life on hold for a while you know.

And that's a strong reminder to myself every time emotions sweep in and it hits me again on how I am missing out in life with my friends and all. (My friends are amazing BTW, because they would come to my house and hang out there just so I can hang out too).

Anyways, it is not like I did not already know about the sacrifices that Jesus did but being a mother myself made me understand really, what sacrifice really means. And I think because of that, I begin to "enjoy" motherhood even when Alex is throwing the biggest tantrum in the world. I begin to appreciate the struggles of motherhood because I then believe that motherhood is a calling.

It is not a hobby. You cannot like decide you want to be a mother because you think it is going to be fun. It is not like collecting coins or something.

Despite all that, of course, I still struggle because a human can only have this much patience right? And I think right, children is one of God's way to make us better people wan. Like I pray for patience to increase, the next day for sure my children will do something to test it. CONFIRM.

And you know what works for me when I have rough days to deal with?

I pray- a lot - I believe that prayers can move a mountain - whatever your mountain is.

So yeah, it will all be worth it.

Putting my travel plans on hold.
Laying down my desire to be recognized.
Giving up the imaginary life that I could have had.

Because motherhood is a calling.
By Sarah Khoo
Labels: Parenthood

I don't cook a lot (because one - I am a very lazy person actually and cooking is just too much work, and two - I don't like to wash the after-cooking-things).

But this MCO has "motivated" all of us to some sort of not be lazy in a sense.

So, to make time pass faster and to do something other than putting my kids to sleep (back-to-back), I cook on the weekends. Or at least I try.

My mother-in-law is someone who always makes sure that our kitchen/pantry is well stocked up (even on normal days before the whole #dudukrumah thing started), so cooking at home is already a step easier - no need to wake up early to go do the marketing. 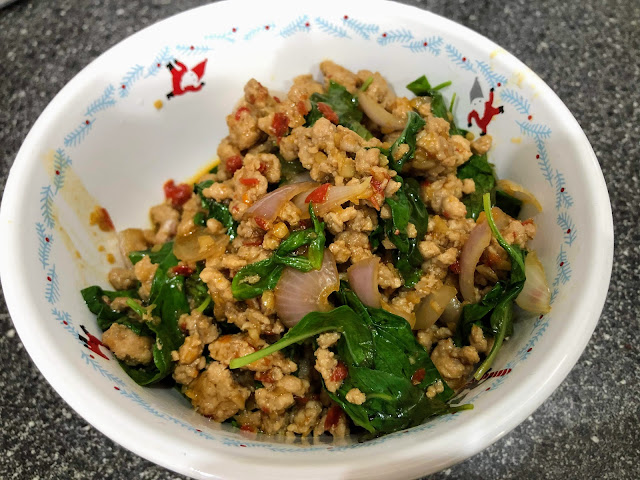 I am a big fan of Thai food (shame on you if you didn't already know that - kidding!), so it only makes sense that I have always wanted to master cooking Thai food.

This basil dish has always been my sure-order whenever I have Thai food. But it is so hard to find one that is really good and satisfying - with the right level of spiciness. Most of the times, it is just not spicy enough - no kick.

So, I decided to try it for myself - since many people told me that it is quite an easy dish to make. 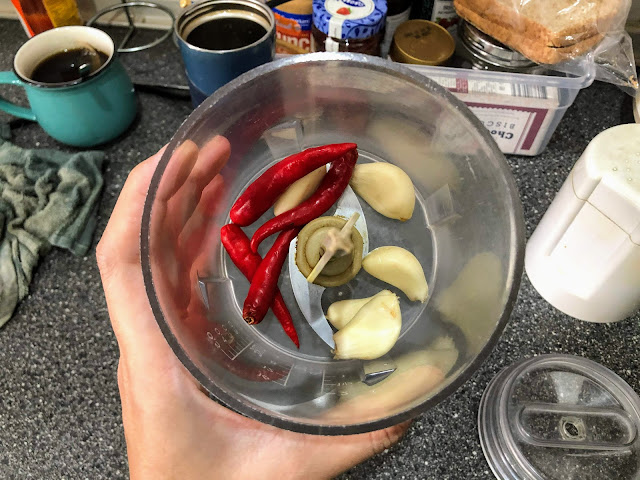 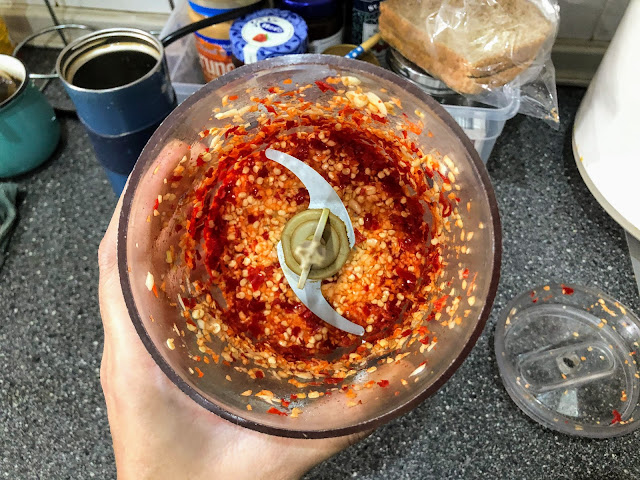 This recipe is really simple okay.

I like to prepare all its ingredients and sauce before I start so I don't like panic last minute (something I learned during this MCO). Heh.

Preparations (step by step) for you guys. This is what I do but you can do it another way of course. 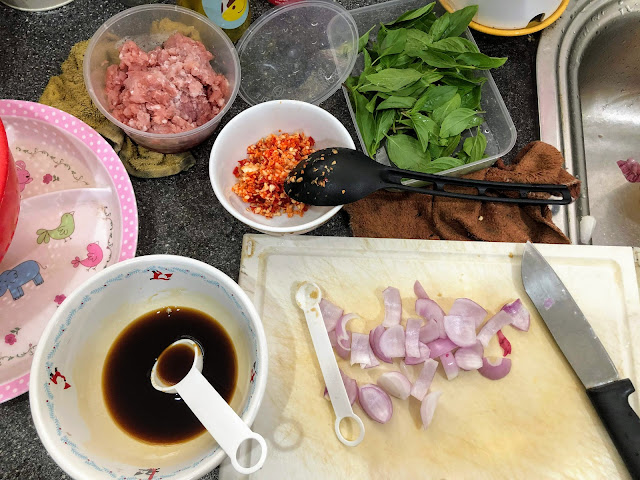 Once all is ready, then it's cooking time!

Put in some oil and the garlic & chilli paste. Stir-fry until the aroma is everywhere and you find yourself coughing. Hah. Kid you not.

Then, add the minced meat.

If I have vegetables, then I will add in my long beans first.

Once the minced meat is cooked, then add in the onions. I like to add onions later because I love that it is a bit crunchy and not softened. 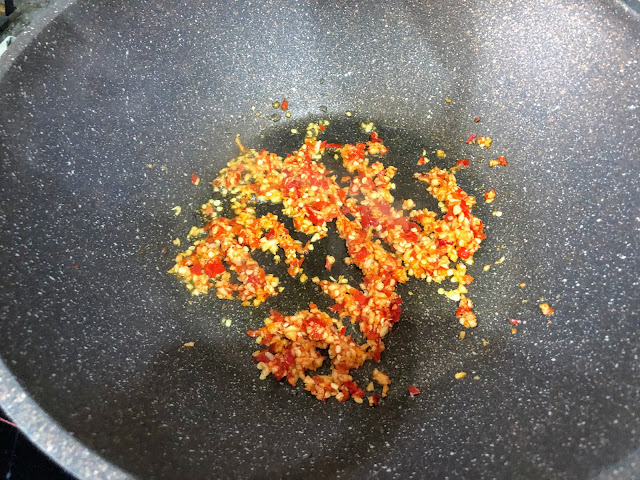 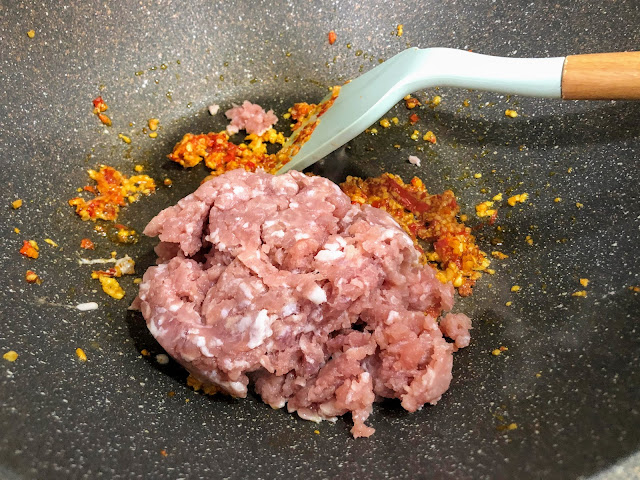 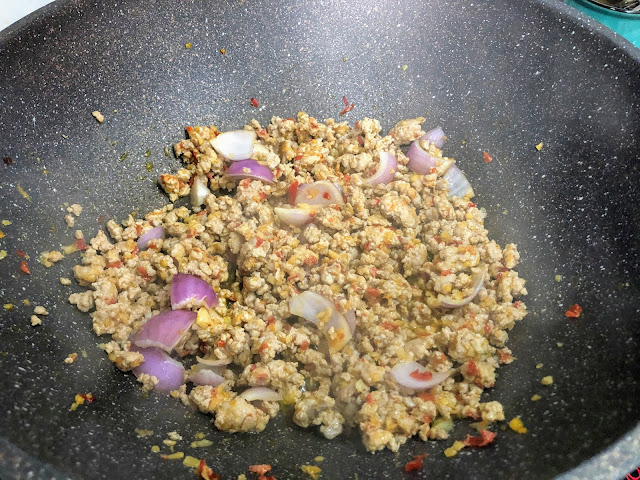 Stir them for a little while more and then add the sauce.

Let it simmer for a while. At this point, you can put in more dark soy sauce if you would like it to be darker.

The last step is to put in the basil leaves and turn off the heat.

Stir the leaves in and the dish is ready to be eaten! 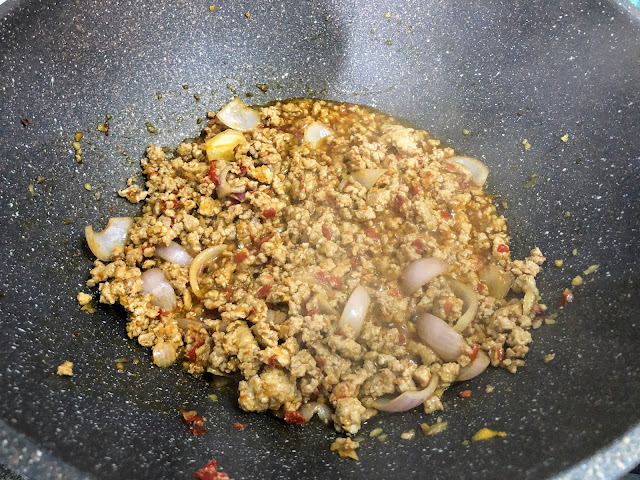 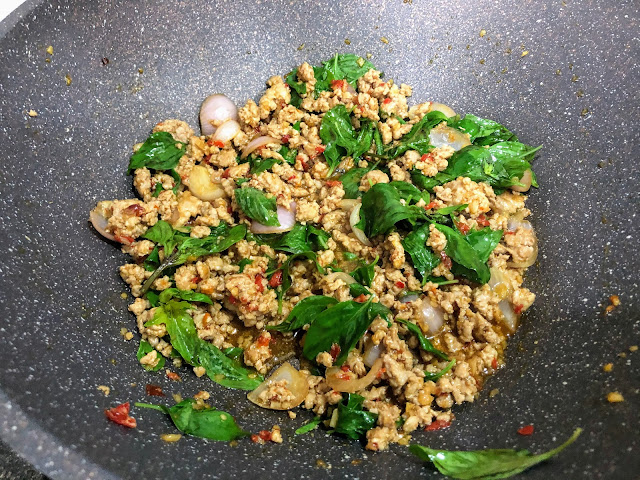 I used the same recipe to make Thai Basil Fried Rice and Pad Kra Pao Spaghetti and they were bombs, please! So so good.

I don't use just minced meat all the time - sometimes cubed chicken meat and sometimes minced salmon. It can really be any protein you want to be honest that is why I love this recipe so much. It is so easy!

The sauce is really applicable to all kinds of stir-fry if you asked me. It's like my secret sauce now. Not so secret anymore heh. Highly recommended for those who cannot really cook well but loves cooking. This is your go-to sauce please! 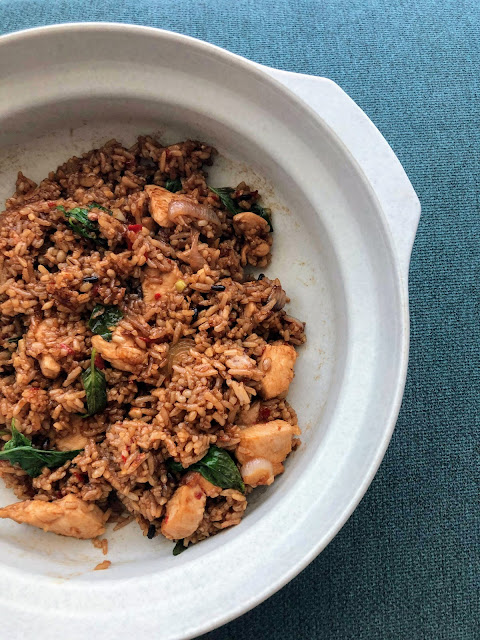 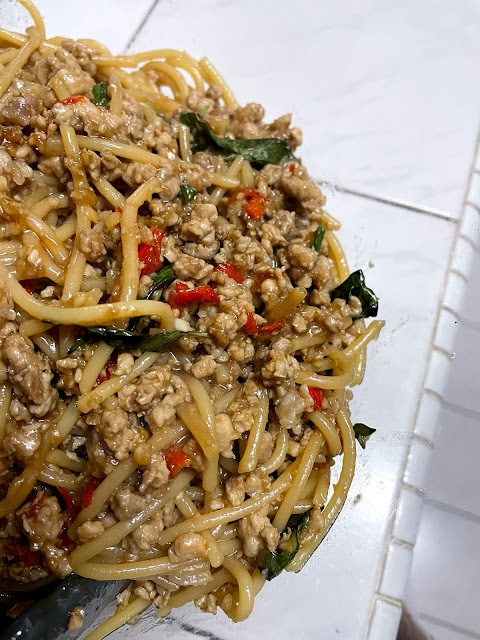