We have thousands of photos to go through and select those that we like, so do bear with us as we find time to upload them okay.

Our first challenge was getting a laptop that has a DVD reader in it and we finally got to borrow an external DVD reader from the seven-months-to-go-groom-to-be, Nehemiah.

We have four CDs to copy all these images from, and boy so many photos to see!

While I wait for the photos to be copied over, I shall share with you guys girls/bride-to-be on this one thing that sort of bothered me during my wedding day.

Yes, it's exactly what the title says.

I do not wear fake lashes on normal days. I think in my entire life, I have only worn like for a few times only and other than the fact that they make your eyes feel heavier, they are actually fine.

On my wedding day, my makeup artist, Sam puts on the fake lashes on my eyes and it felt normal. As heavy as I remembered it would be.

It didn't bother me until when she puts on the veil over my head and face.

It was a struggle and the struggle was real.

I could not open my eyes when the veil was over my face. It was so difficult for me to open my eyes without my hands pushing the veil from the inside.

I cannot be pushing the veil from inside everytime I blink, right? Especially not when I walk down the aisle. The only way to handle this is not to blink as often.

The many years of cannot-blink-or-you-lose game with buddies finally have its use afterall. Heh.

So, that's basically what I did until the man opens my veil and I felt alive awake again.

My eyes were like half-closed most of the time okay! It's impossible to have my eyes opened normally because the veil was heavy on the lashes.

I even asked Sam to trim off some of the lashes because they were probably too long. She said if she were to cut some more, then my own real lashes would be gone too.

You see the photos below and you will know what I mean. 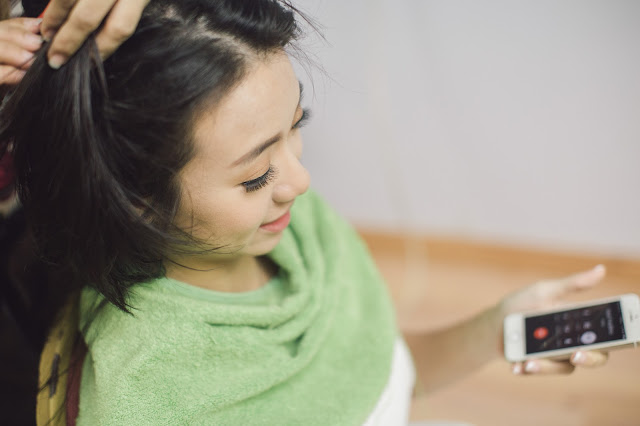 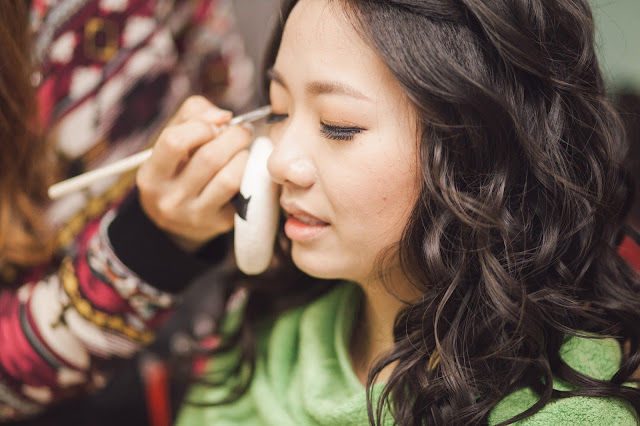 Those long eyelashes. This version that she gave me was supposedly the shortest version and I wanted shorter so that it will look more realistic.

Once the veil goes down, my eyes went down too. Hah.

Brides who have been through this, I feel you, and for brides to be, I don't know what is the solution to this. I'm sorry.

I had to tilt my head down so that I don't feel the pressure of the veil pressing towards my eyelids, that actually made me feel as though the fake lashes were going to fall off.

Or I had to tilt it higher than normal if I want to look at people's face or the screen during worship, or Ben when he was sharing. I got photos to prove this point, but I'll just share one. Hah.

Oh, and I did mention about it being heavy right? So, some photos, you can actually see my eyes like half-opened but the truth was I was trying so hard to make my eyes fully-opened. G.

I dare not move when the fake lashes were not touching the veil, but that made my neck hurts so boo.

Look at this photo below! My eyes were like half-closing already. So are Vanessa's. Maybe she sleepy la.

Oh look! She slept already! Tough being the maid of honor okay please. Or maybe her fake lashes also too heavy for her eyes already.

I wouldn't recommend fake lashes to brides la, but then again, without it, your eyes won't look bigger so I also don't know what to do. 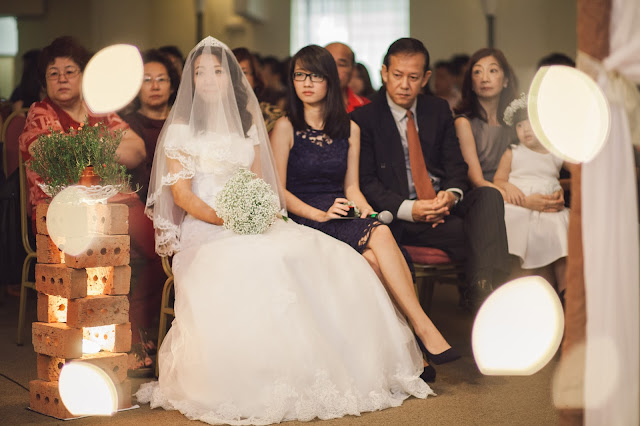 I looked at photos that shows my eyes like that I wanna pengsan! 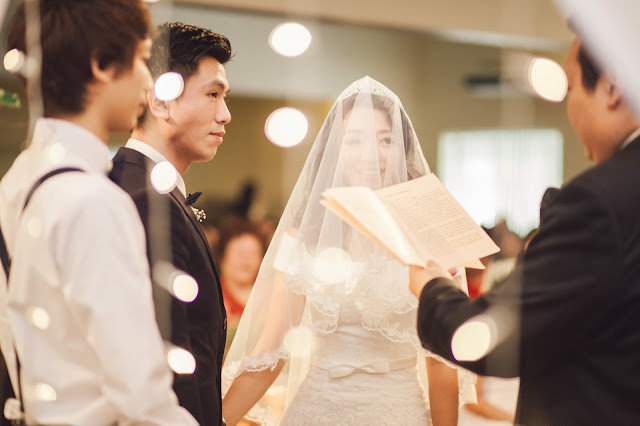 The first thing I did when he lifted up my veil was I touched my lashes to make sure it doesn't come off with the veil. That would be a disaster!

Imagine the fake lashes stuck on the veil when he opens them. It would be a story to tell though. Hah. 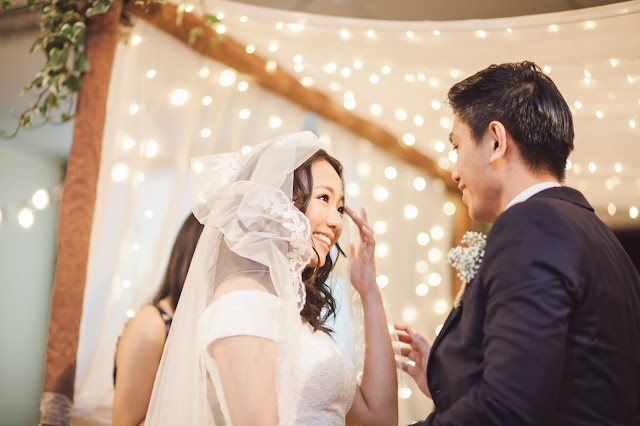 So, here's a little sharing to spare me more time to sort out the photos and upload them sooooon.

Have a great weekend everyone.