If you are a true Penangite, you would have known or have eaten at this famous breakfast/lunch place at Song River Cafe by Gurney Drive, Penang.
Don't worry - not too late for you to go try it to be a true Penangite - because I found out about it not too long ago also ni so still got time for you to be self-declared a true Penangite. Heh.
They do not serve dim sum - in case you are wondering. They serve Chinese food meant for breakfast and lunch. Closed for dinners (if I am not wrong).
I thought that it was a bit too noisy from where we were seating (the front of the shop) as could hear cars drove by and dust etc. Not very bagus.
The previous place the front side was quite covered so can hardly hear any like engines of cars driving by and definitely not much dust flying everywhere.
BITTER GOURD WITH EGG - RM9.80 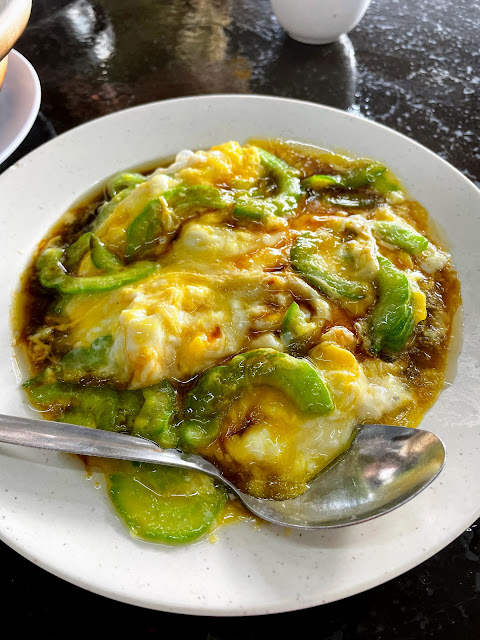 He says: It's alright. A bit too much egg and no bitter gourd.
She says: It should be called fried egg with bitter gourd. I mean seriously, those thin-sliced bitter gourd is like so few la, please. Disappointing.
FRESH FISH BEEHOON (THICK) SOUP - RM9.80 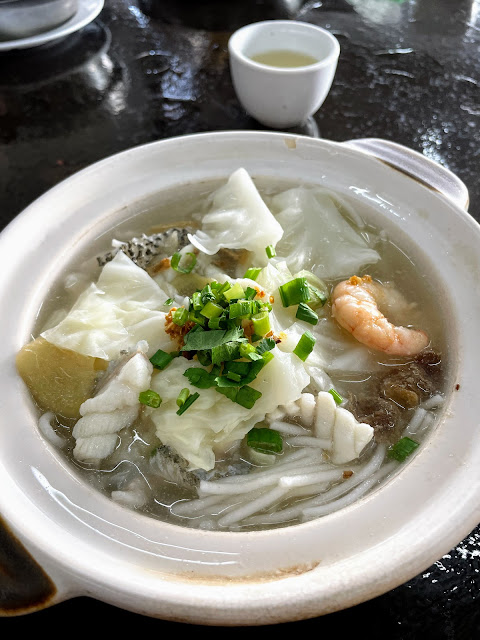 He says: Not my type of food and not much taste also the soup.
She says: Can find better beehoon soup outside. Nothing special.
FRIED OYSTER NOODLE - RM10.30 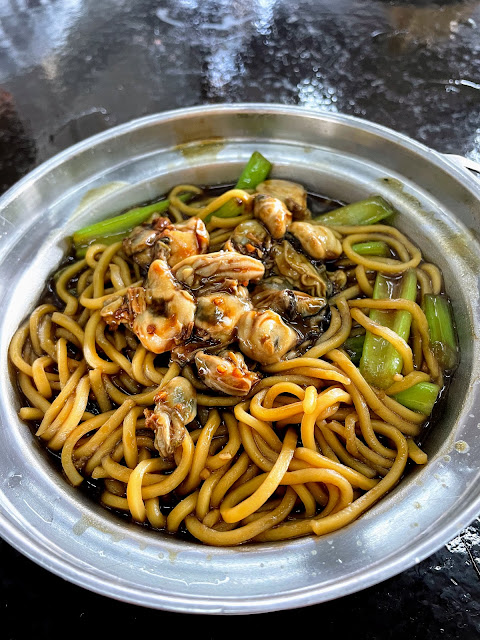 He says: So-so only - but got a lot of baby oysters.
She says: Quite generous with the baby oysters in my opinion. This is a one-person portion by the way.
BRAISED FISH HEAD WITH YAM - RM34.40 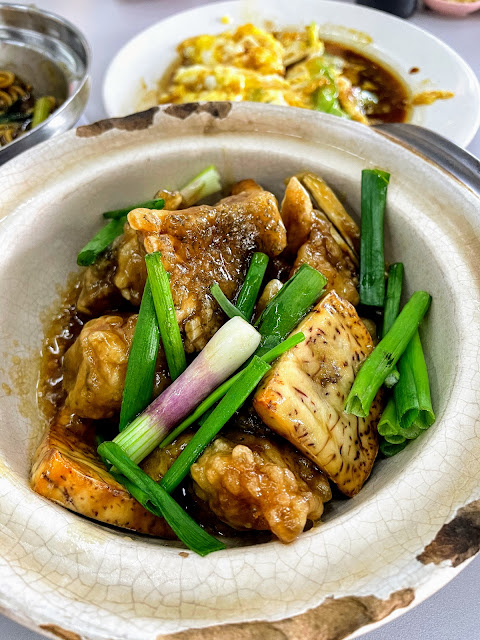 He says: Not nice and don't like this one. Tastes better ones outside.
She says: This is my parents' favorite. An okay dish for me.
EGGPLANT BEANCURD - RM15.50 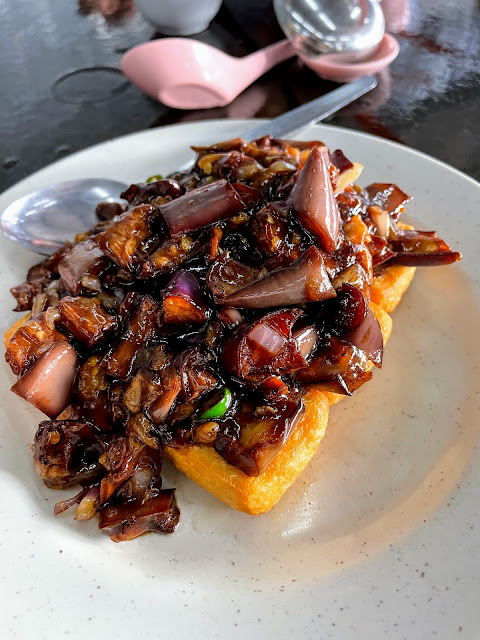 He says: Tofu is soft like my pillow and the stir-fried eggplants tasted so appetizing.
She says: Family's alltime favorite! The tofu is soft and the way the diced eggplant is cooked, it is absolutely yummy.
FRIED BELACAN CHICKEN - RM15.50 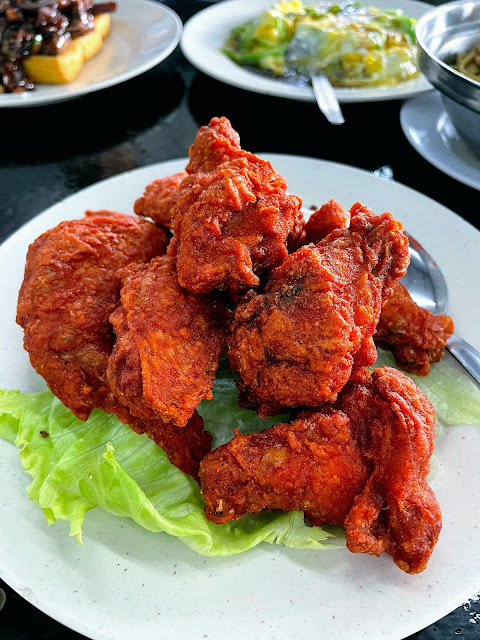 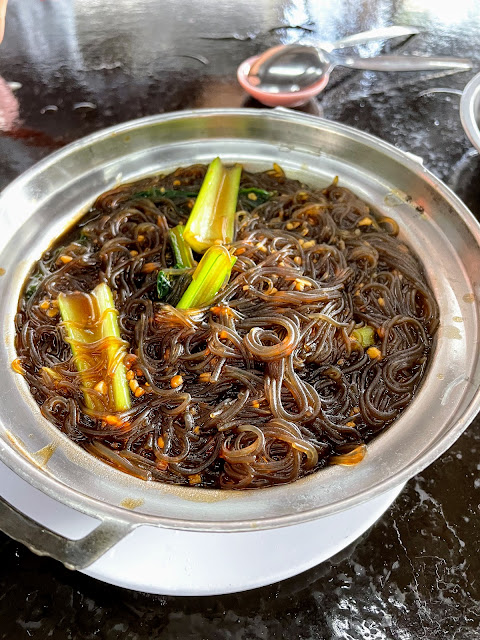 He says: Love this one - will order this again next time.
She says: Not too bad, but I think they used to taste better.
SHRIMP DATES - RM11.40 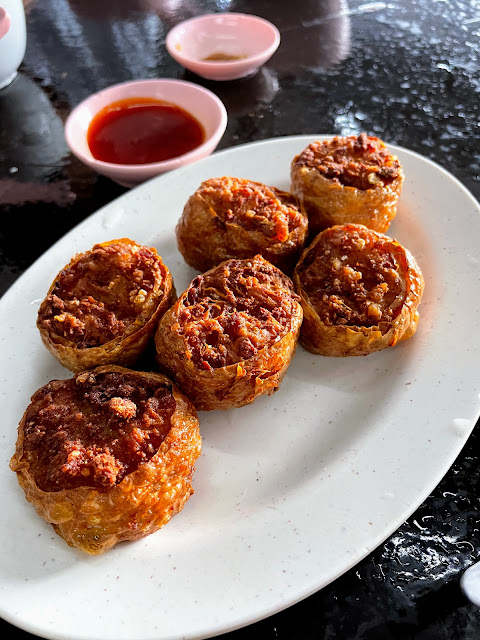 He says: Typical fried stuff - okay okay only.
She says: Don't order this. Hah. Cannot tase or see any shrimp inside. Macam a lot of flour.
Total price for 6-adults: RM177.10
When they were still at the Song River Cafe (not too far away from current location), their food tasted so much better and I remembered that we would always leave the place feeling really full and satisfied.
This time, we left the place full (because over-ordered again heh), but we were not satisfied, and most of our food came in 1-person's portion (but 2 bowls because separated into 2 tables), but to be billed at RM177 is a bit nonsense.
We didn't even order anything seafood.
The price is definitely hiked up after they moved to this new place.
We used to love having breakfast at Song River Cafe but now, with the food quality drop and pric increased, I don't think we would be coming back anytime soon.
Time to try other place for breakfast.
Till next makan, bye now.
By Sarah Khoo
Labels: Review Things
Newer Post Older Post Home