How We Almost Lost Our Son to Suffocation.

Never have I ever thought that this would happen to us, to Alex.

We started sleep training Alex since about 2 weeks ago and ever since then, he has been sleeping in another room, on his own - with both our rooms' door open.

It has been going pretty okay with this training although it was the most difficult first week of training with three of us losing sleep - a lot. Heh.

Ever since birth, he will always sleep in his own crib that has wheels for us to move him around - very convenient. We don't do co-sleeping because hello, our queen-sized bed already feels crowded with two adults. Imagine if he sleeps in between Adrian and myself, for sure we would end up sleeping on the floor. That and because we decided that the bed is for the two of us - the adults - not for him to sleep and also, later we terlena and accidentally sleep on him.

But during the night, he will wake up wanting to be carried and/or rocked to sleep and that was really difficult because we would have so little sleep it's insane - and again, that's parenting (people will tell me heh).

At times, he finds comfort just by lying on Adrian's stomach. It's super cute but very not practical okay. 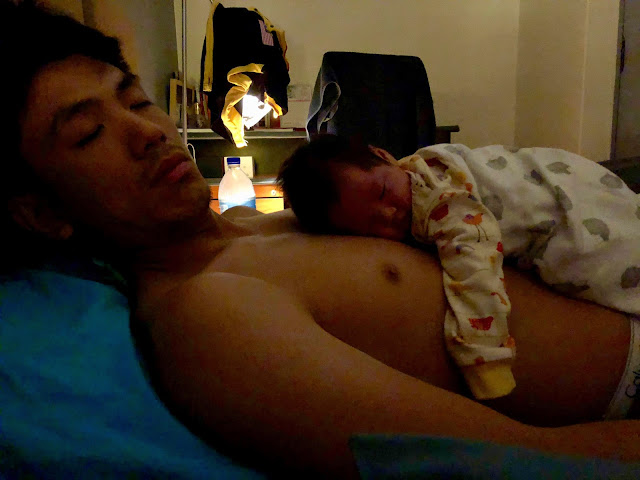 When he is in his own crib, we put him down on his back (after a long time of rocking in our arms), with his face naturally turned to the side and both hands up in the air, a blanket over his torso and legs and then the mini bean-bag pillow on his tummy for some secure-feel. Oh and a bolster next to him because sometimes he sleeps sideways and the bolster supports his back.

Now I know that all these things are like sleeping hazards to an infant because they increase the risk of SIDS and suffocation, but because Sha Lynn and Daryl also slept with this pillow and blanket, it was fine for me and Adrian. He seemed so comfortable in them anyways.

And he is usually in the same room with us - so we would always like to wake up and check. 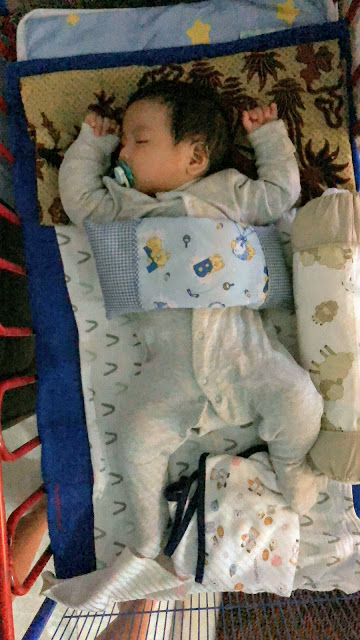 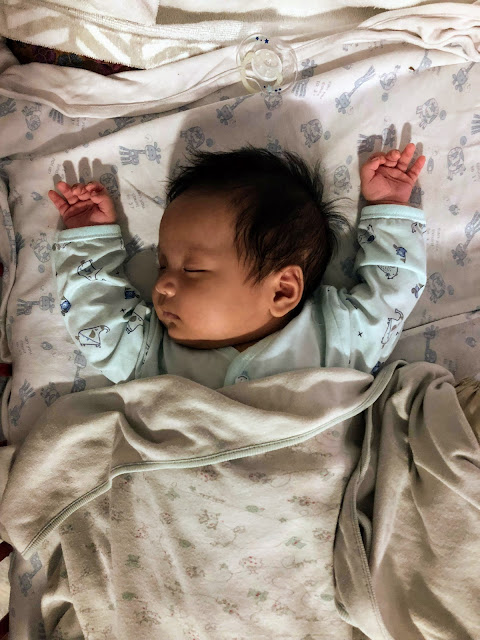 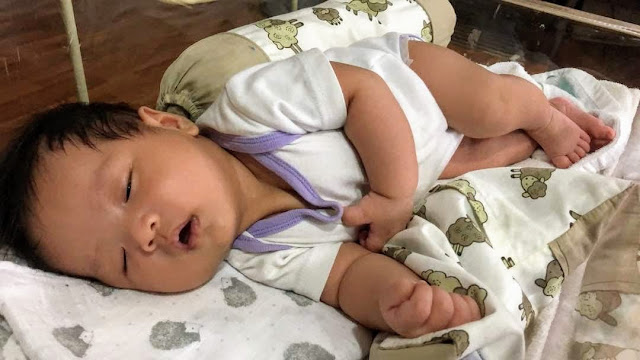 This mini bean-bag pillow is like a must-have because he calms down and falls asleep faster with them. This and the pacifier - his two must-haves.

Even when being carried with an Ergobaby, this mini bean-bag pillow for sure has to be there - as though he needs to smell and touch them. 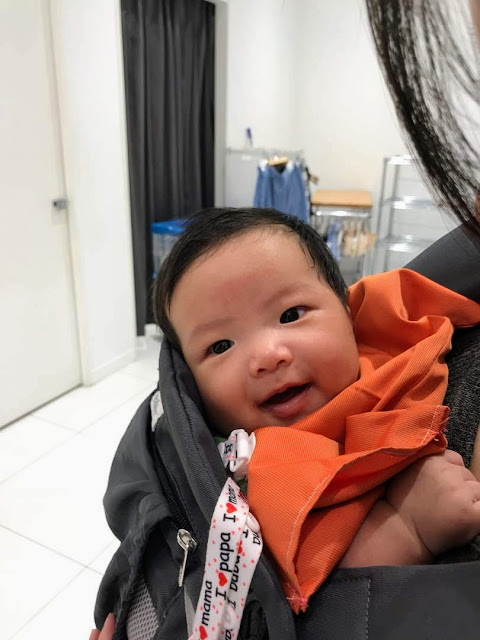 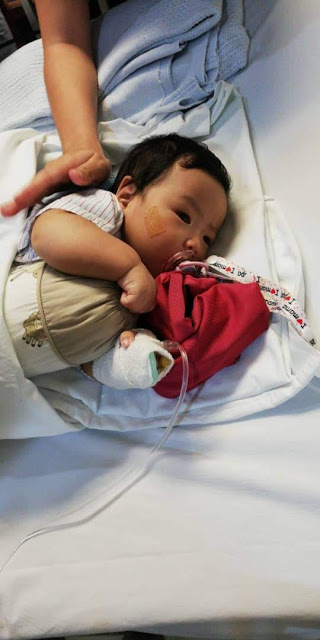 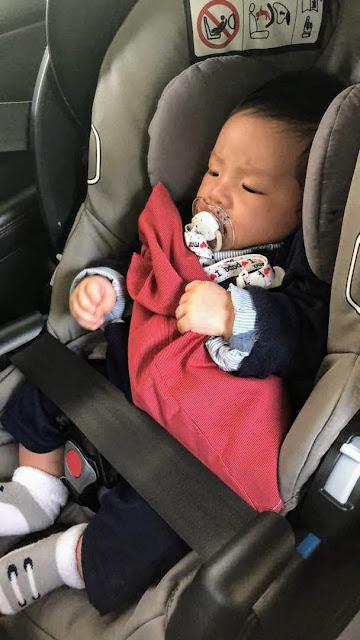 So, here's the thing about this entire sleep-training thing.

Because he now sleeps in another room, we do not turn on the air-con for him because the fan is enough and we remove the blankets because not cold anymore and it's dangerous to leave a blanket in his crib in case it covers his face.

We decided to still use the mini bean-bag pillow to put on his tummy so he would be comfortable and after the first few nights, he seems okay and loving it - even without the blanket and pacifier. He had never been able to pull the pillow up from his torso so we know that it's fine to have him sleep like that.

This is what we have decided to do for his sleep-training.

We would rock him in our arms first till he is half-asleep, then we will put him on his crib on his back and then put the mini bean-bag pillow on his lower torso. Lights will be fully turned off and the door will be half-closed. Most of the time, he would continue sleeping and only have his cry-it-out session at 3am-ish and another time at about 6:30am.

The training is that we will not pick him up at all when he cry so that he can learn to self-soothe and sleep on his own - no more mad rocking him and walking around the house for an hour.

So, every time he started crying in his room (yes we can hear it because this boy screams more than cry wan), either Adrian or I would get out of our bed and out of our room to take a peek through the half-closed door of his room to make sure that all is okay and he's crying for attention and not in-trouble-kind-of cry. 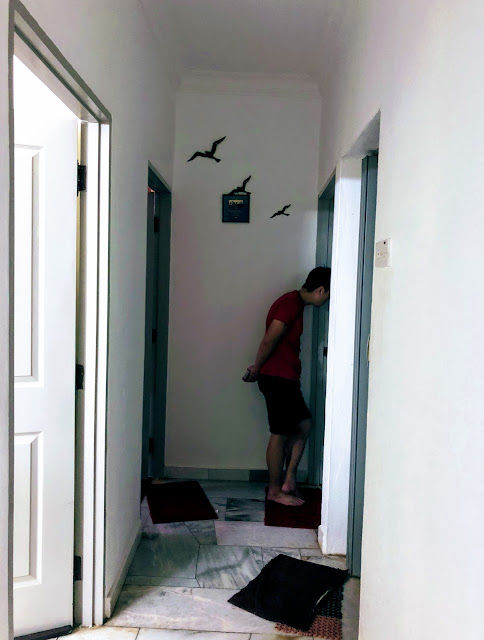 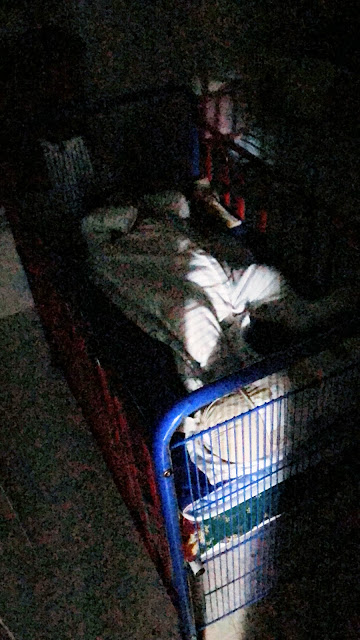 And if it is me who got up, I would quickly go back to my room and lie down and tell Adrian that he's okay and both of us would half-sleep to wait till he stops crying. Then only we would fall asleep deep. Heh.

Most of the time, I would still be very much awake because I would time his crying sessions. Sometimes, it would last till 30 minutes and sometimes it takes 10 minutes only and he would fall back asleep.

Then, there is this particular night where he was crying the usual kind of cry and I was in my room just waiting it out. It was probably like going into 10 minutes or so and then he became silent and usually I would just fall asleep myself.

I felt that I needed to go take a look at him. I felt that that silence was unusual.

When I peek through the hole, I could not believe what I saw.

The mini bean-bag-pillow was covering his lower part of the face - mainly the mouth and nose. Both his hands were up waving in the scariest panic mode. His face was turning left and right trying to breathe.

I quickly removed the bag and he let out a sigh-relief like he finally got to have oxygen. Then, he started to cry and I was relieved.

Obviously that night I broke all sleep-training rules and carried him and just repeatedly whispers to him, "I'm sorry, Alex".

He calmed down and fell back asleep in my arms.

I have never felt so scared in my life. The fear of losing my son was all over me and I just kept thanking God for mother-instinct.

I dared not imagine what would have happened if I have decided to continue to be on my bed and continue sleeping - assuming that my son has fallen asleep like he usually does. Thinking back, he would have died of suffocation from the pillow because of the heaviness of the beans in there and he is still too young to be able to coordinate his hands to remove them from his face.

Then it hit me - that it's different now because he never has to cry and struggle in his own bed when we put him on the bed because we would always make him sleep first before putting him down. Now, he has to go through the crying and struggling because no one would pick him up - because he has to learn to fall asleep on his own.

So, for sure he (try) to grab whatever he can in the moment of being frustrated because no one would pick him up. That's how the pillow must have gotten from his lower torso up to his face.

That day onwards, we removed the pillow and bolster and only let him sleep as it is. 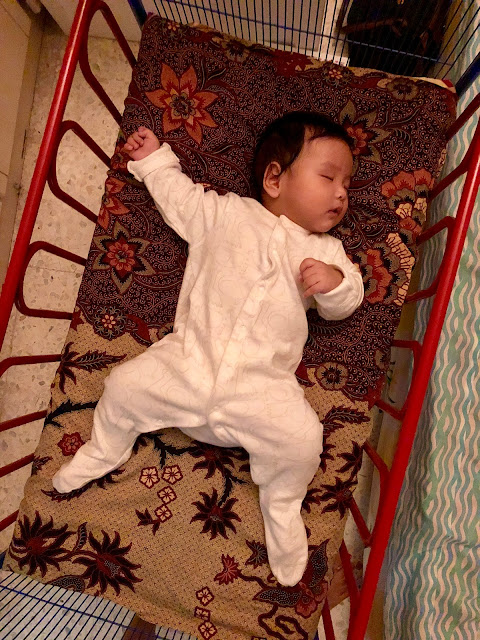 I never ever ever want to go through that kind of scare again in my life. It was the scariest thing ever. Every time I try to imagine if I have not gotten up, Alex would have been dead- gone. I cannot let that sink in - too scary really - nightmares started since that night and prayerfully, it will be gone soon.

I would highly recommend other parents to do sleep training (maybe in the same room) because it seems to have helped in other areas other than sleeping - like when he goes into his car seat. He used to scream non-stop the moment he gets in the car seat and stops only after he gets out of it. Now, he would sit quietly and enjoys the ride - macam he won't bother crying and screaming anymore.

Now, he sleeps in the same room with us because he knows how to yummy-turn already so yeah. Need to watch him closely especially if he tummy-turns middle of the night.

Also, after changing pajamas and playing with him for a while, we will leave him on his crib wide awake and turn off all the room lights (except for 1 small light in the corner) and he would fall asleep on his own with no crying at all. The same goes if he wakes up for milk at 4am (if we feed him early at night before he sleeps), he would fall back asleep on his own. No need to carry and rock anymore. LIFE-CHANGING I TELL YOU.

We try to feed him milk at 10pm and his next drinking time would be at 7am so that works really well for us.

I also spent some time reading up on suffocation, choking on toys, and SIDS.

Apparently, Sudden Infant Death Syndrome (SIDS) is sometimes known as crib death because the infants often die in their cribs. Although the cause is unknown, it appears that SIDS might be associated with defects in the portion of an infant's brain that controls breathing and arousal from sleep. SIDS is spontaneous and random - my bulu naik reading up on all these things because I am beyond scared of losing my son - no one should go through the pain of losing or almost-losing their children :(

So yeah. This is a true story of how we almost lost our son to suffocation.

All is well now. I am beyond thankful. 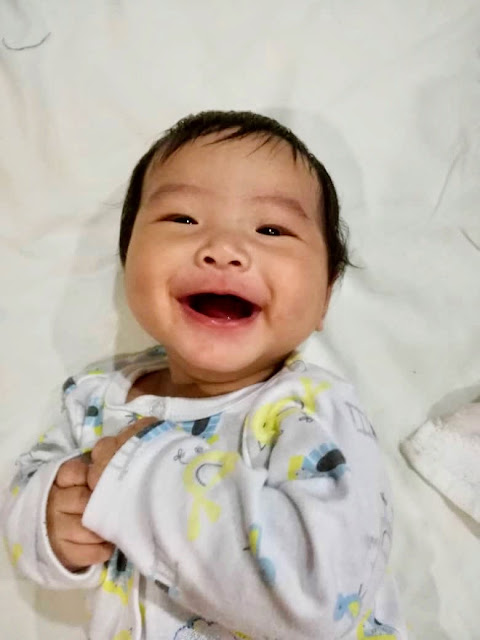