So, who is Chrissy Teigen and why of all people, I decided to follow her recipe?

Chrissy Teigen is like the funniest-most-realistic-celebrity-model I've ever known and ever since I started following her on Instagram, my life macam brighter ki. Cos she's just so funny and raw and real, I love it. And I just found out that she's only 3-years older than me. Heh. And she's the wife of the ever-famous, John Legend. So, you cannot not know her okay. 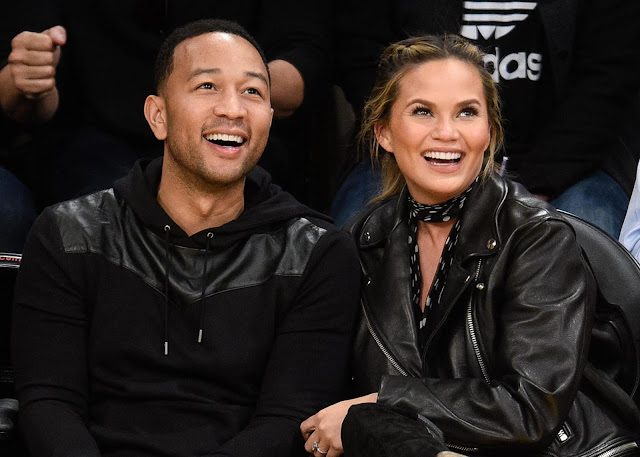 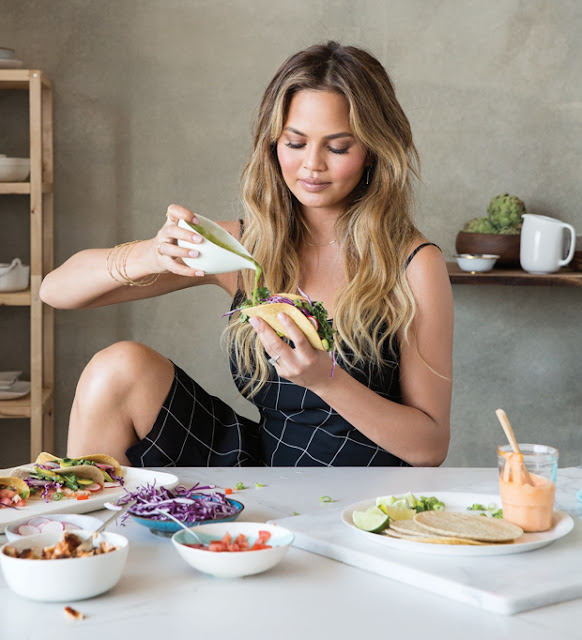 Chrissy Teigen published her first cookbook in 2016 - Cravings: Recipes for All of the Food You Want to Eat and then in 2018 - Cravings: Hungry For More (aka Cravings 2).

I have always been wanting to get my hands on these two cookbooks but can only get them in US (I think) and they will prolly cost like RM100 each or something.

Unless anyone knows a way for me to have both cookbooks in soft-copies. Then that would be the bestest. Heh. Let me know if you know any kangtau! 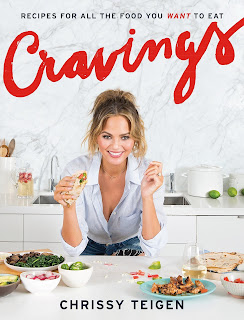 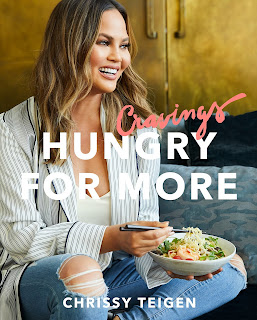 Okay, back to this.

Oh did I also mention that she now has her own line of cookware - Cravings by Chrissy Teigen (available at Target). Of course we cannot get it here in Malaysia. For 12-piece Non-stick Aluminium Cookware set, its USD140 at Target - about RM700 (+-) to own a complete Chrissy Teigen's cookware set. WORTH THE MONEY PLEASE. Ahh dream kitchen will happen one day. 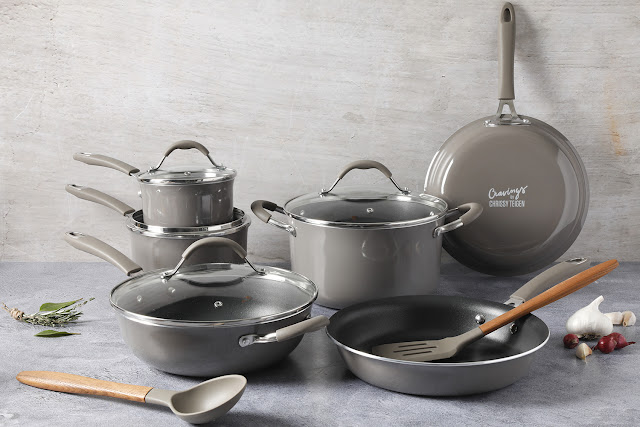 Back to the cooking part.

So one day, she decided to cook her Cheesy Chicken Milanese and film them on her Insta-story and guess who watched it too many times?

So many times that I decided to give it a try because she made the recipe so easy and do-able. And doesn't seem like it's going to cost a hole in my pocket to get its ingredients.

Check out photos below for easier-browsing. No need to read words anymore. Hah.

For the side salad:
Washed and cut broccoli
Diced potatoes with skin
A packet of Coat & Cook Sauce: Olive Oil & Rosemary (from Cold Storage) 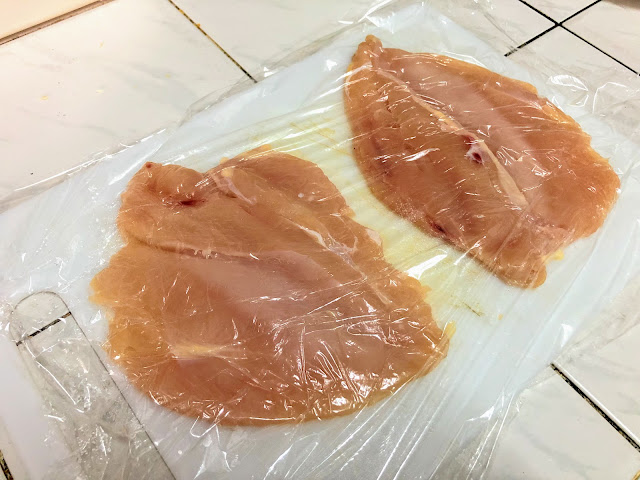 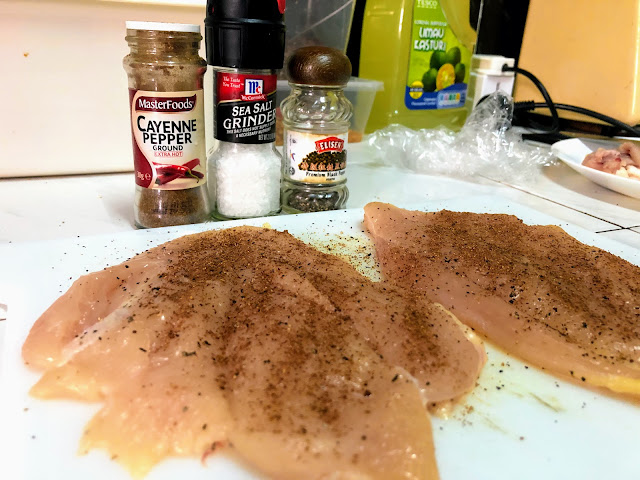 After pounding the chicken breast, I sprinkled on both sides of chicken some salt, pepper and cayenne pepper. Not sprinkle actually. More like pour because I didn't want to be stingy later no taste lagi teruk. Heh.

Then, I put them aside while I prepare the next few items for the frying.

If you follow Chrissy Teigen's recipe step by step, she added Japanese bread crumbs (panko) for that extra crispiness texture but I could not find panko crumbs in Jaya Grocer so no panko it is.

These ones are just sprinkles of salt okay. If not later all becomes too salty. 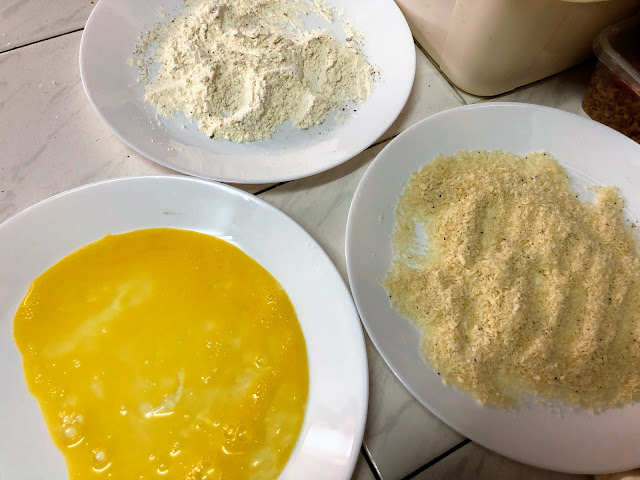 Then, once done with these ingredients, I cut into small pieces of the black pepper cheese (sandwich slice). You should get the Mozzarella cheese (as according to CT's recipe) but I didn't have enough money that day so I improvised and used sandwich slice with black pepper flavor.

Proceed to put the chopped cheese onto one side of the chicken breast. You can add in like sliced ham or something but I didn't want to be super gau-gau later all cannot eat. Hah. 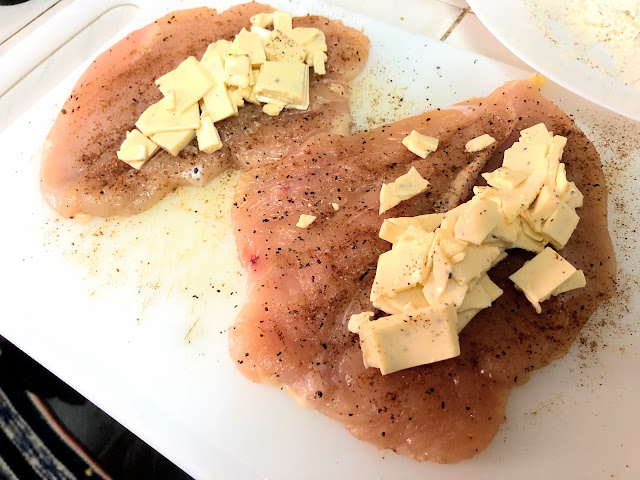 Then, to seal the chicken breast and make sure the cheese doesn't ooze out during the frying process, use water and flour to seal the deal.

Tap some water (using your finger of course) onto the outlines of the chicken then followed by flour. 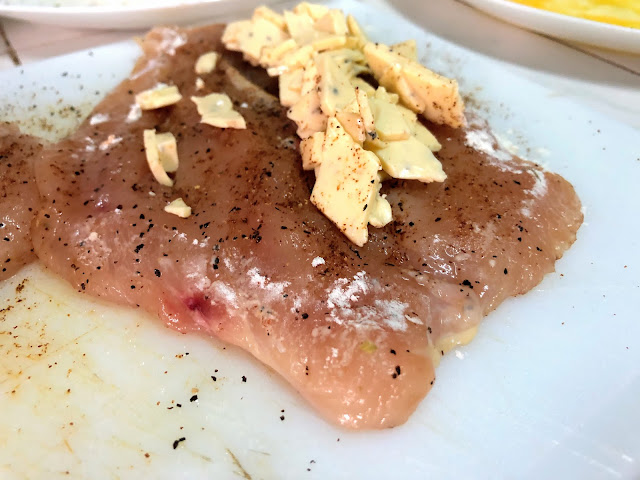 After that, roll the-now-sealed-chicken-breast onto the seasoned flour.

Then, egg and then lastly, onto the breadcrumbs. 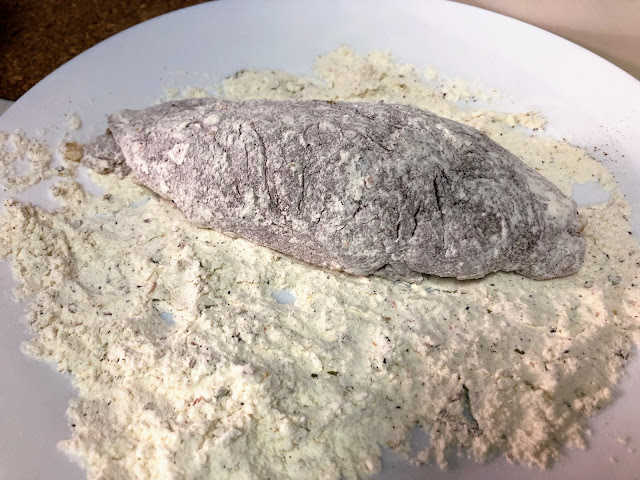 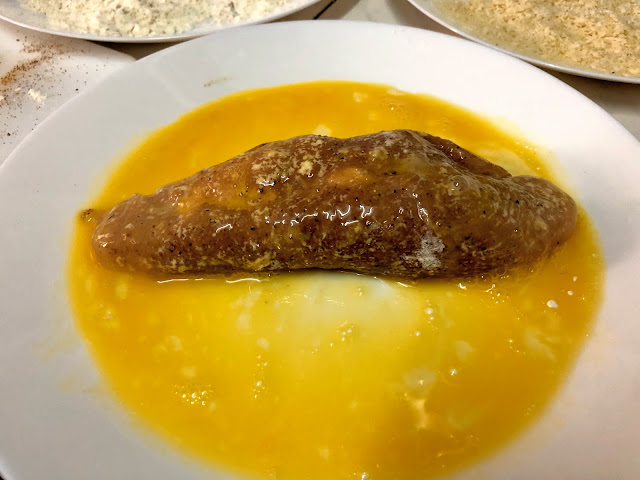 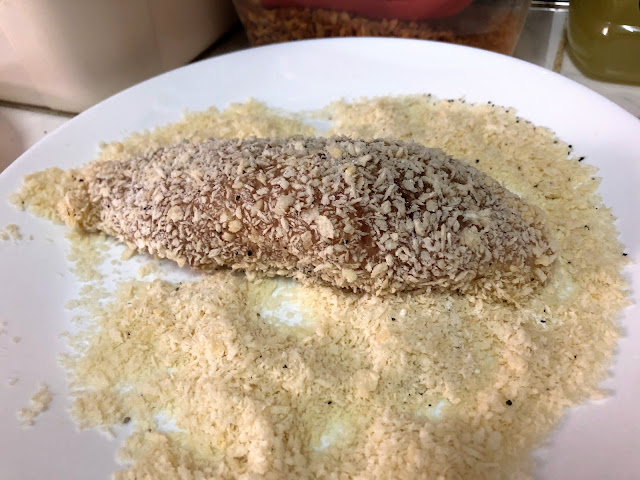 Then, go and heat up your pan with oil in it.

Once it's quite hot already, put in your chicken breast on low/medium fire and let the oil and heat does its magic. Remember to turn it around after the down-side has turned to your brown of liking.

In the meantime, prepare the side dish of the day - baked broccoli and potatoes.

Once you've cut into the perfect bite-size, pour this Coat & Cook Sauce: Olive Oil & Rosemary into the bowl of your cut vegetables and stir them - till you are quite sure all the bits and pieces are well coated.

Then, put them into the oven and bake.

Don't ask me how long or what is the temperature - because I just hentam and look-see look-see. I adjusted the temperature to about 200 degrees and timed it to 20-minutes of baking.

Once the 20-minutes were over, I checked the veges with a fork and if its still too hard for my liking, I put them back into the oven and add an extra 10 minutes. 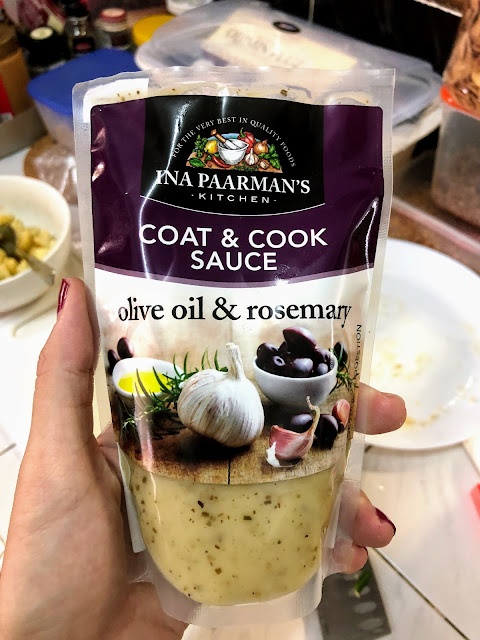 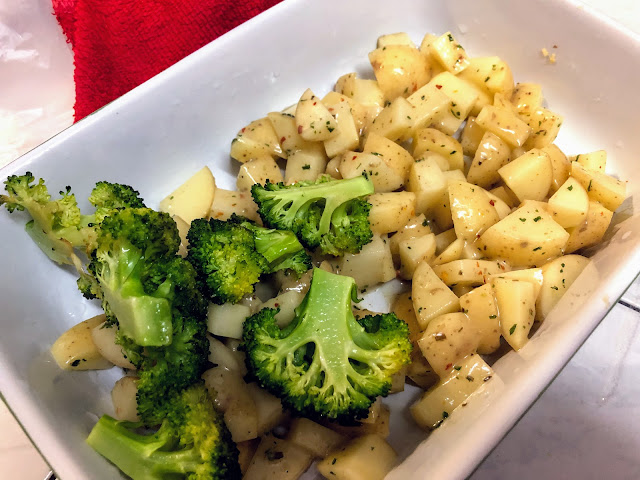 Before the added 10-minutes were up, I removed the baking tray and added my chicken breast in it and continued baking for 5-minutes - to make sure that the cheese has fully melted inside and also because Chrissy Teigen said so. Heh. 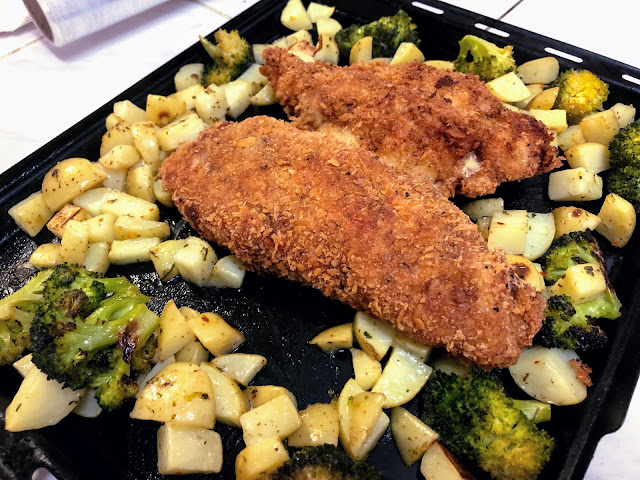 And dinner is served for two hungry adults.

Sorry ah, no special sauce to present all. We had the chicken milanese with Sriracha - best chilli sauce in the world please thank you. 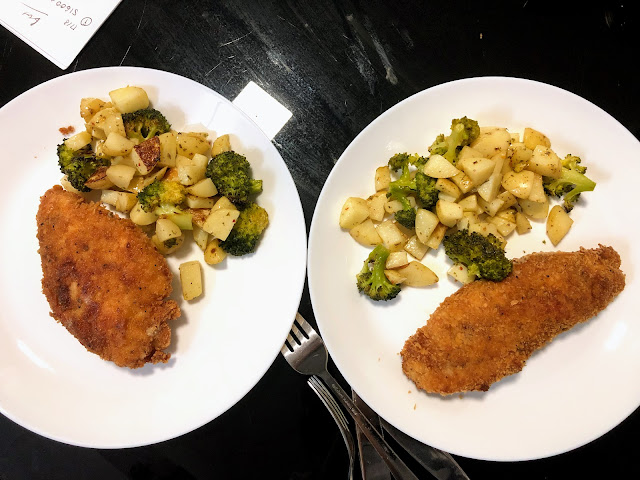 As you can see, I did some improvisation (a lot of it actually) because I must add own flavor ma right? Hah.

I enjoyed cooking this because it is really very simple and really very yummy too. I thought it was going to be a little too salty since salt was added in so many parts of the entire cooking process. But nope, it was perfect. 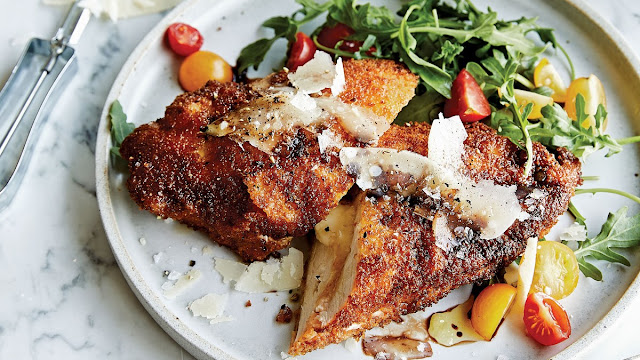 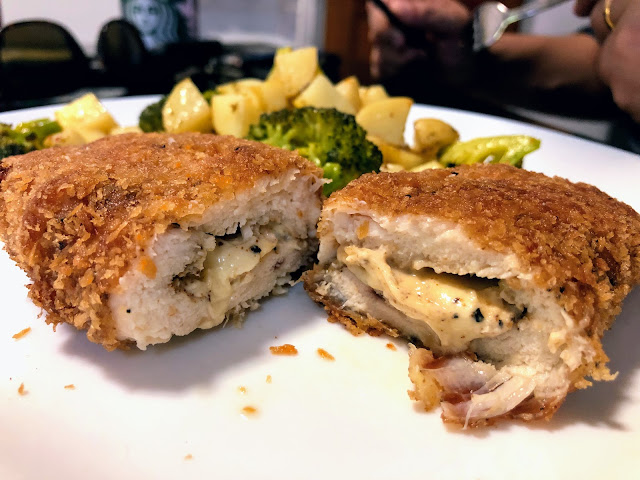 Go try cooking this and let me know how yours go!