What Is The Hardest Part About Motherhood?

I was asked this question many times, by different people, and I find it difficult to come out with an answer every single time.

Surely every different stage of motherhood has its own difficulties, so I struggled to find my answer to this frequently asked question.

Not until recently, when we realized that we have a few days before Alex officially attends kindergarten. I remember feeling excited when we registered for him last year, but as of this month onwards, that excitement had turned into sadness. I know. So weird right?

Something is wrong with me. But is there really?

I teared up (in office) when I received a message from his principal (last week I think) - informing me about an orientation for all parents and then it really hit me hard. Then a few days later, I received another text message, asking for Alex's name in Chinese character and I almost lost it. Heh.

Then, I realized that the hardest part of motherhood for me is letting go, over and over again. It does not matter how big or small the 'letting go' is, it is still as hard.

I know of the importance of letting go. You know so that he gets the chance to grow his own set of wings. Knowing that and actually needing to do it are two completely different things.

It is by far, the hardest thing I had to do. Childbirth is a peanut in comparison to letting go.

I also know that this is just me letting him go to school to learn Mandarin (mainly hah) and to get a social life among his peers and all that kid's stuff. But it is also the fact that I am letting him go to an unfamiliar place where he has to handle things on his own. Don't get me wrong - I want him to be independent and all but I have so many what-ifs.

What if he "forgot" to pee and accidentally peed in his pants, and his peers started to laugh at him?
What if he gets bullied? He is quite small in size for his age.
What if no one wants to be his friend?
What if he needs to cry but I am not there to comfort him?
What if the teacher is being mean to him and he doesn't know how to tell us?
What if he gets scared because he doesn't know anyone there?
What if he doesn't understand the teacher? (his class in Mandarin based)
These what-ifs are enough to make me want to keep him "safe" at home for another year, and another year. Of course, we are not going to do that. But what I am saying here is, the worries are endless. The moment we decided to get pregnant, we already know that the worries are here to stay till they are old and wrinkly and when it is time for us to meet with our Creator.
But I was not aware that these worries can be overwhelming. That they can make you make stupid decisions. Yes, I have actually thought of postponing another year before sending him to school. Adrian talked sense to me of course heh.
But now, I need to remind myself that for the rest of my life, I need to learn to "enjoy" letting go, over and over again - because that would be the best gift I can give to him. I cannot "protect" him forever and not allow him to go out there and make lemonades when he gets thrown lemons hah. Or limes, since he is more obsessed with limes than lemons, but you get the point.
Wow, motherhood is one crazy ride. It comes with tonnes and tonnes of endless emotions.
I acknowledge that Alex is a much more sensitive person, and I feel the need to protect him more than Sofia, and if I am not careful, that over-protective is going to cause him more harm than good.
So yes, I finally got my answer.

The hardest part of motherhood is having to let go, over and over again, and enduring these tiny little heartbreaks. 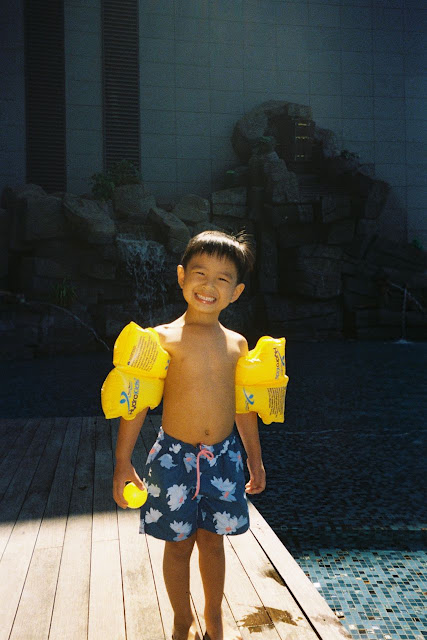 "Today is your first day of school and I know that you will have fun and learn so many things out there, Alex. I just know it. I love you, and I always will, for as long as I still breathe. Thank you for kickstarting me in these motherhood things. It's been a ride! Letting you go today to go figure some fun kids-life things on your own heh. Have fun, baby boy, and remember to eat your packed snacks and go to the toilet when your pee-pee wants to come out already not after it comes out okay!"
Till next time, bye now.
By Sarah Khoo
Labels: Parenthood
Newer Post Older Post Home