UPDATED AFTER THE WEDDING:

We both agreed with My Dream Wedding was one of the big mistakes that happened - I was super quick to say yes to taking the package from them just because they looked really promising and their shop looked amazing with the dresses on display - only to find out later that whichever wedding gowns you choose that is on display is upon extra charge. Also, I pointed to a dress that I liked and asked if I could have that as part of the package and she gave me a yes. When it was our turn to choose the dresses, they told me that this dress has been off the shelf for so long already. Heh.

Not only that, we were not allowed to enter the "room" that keeps all their gowns. I only shared with them what some of my preferences were and they were the ones who will bring out the gowns one at a time. I remembered trying less than 15 pieces and they told me that was it.

Despite screwing with our travelling plans and time in KL, they didn't offer to compensate or add anything. Even when I needed to change a gown last minute, they went ahead to charge me about RM1,000. Customer service, zero.

Let's not get to the photography itself. Many times, we told the photographer the kind of photos we wanted and not want (like at the beach kind of photo), he insisted that we go ahead and take - wasted our time and energy seriously.

So, in summary, I will not recommend My Dream Wedding to any couples out there. NEVER.

I don't think there is any couple that we know of who are so chillax when it comes to this part. We didn't bother looking out at different bridal shops/packages until when I happened to know of a Bridal Fair at Paragon Mall last week.

That also I casually told Mut if he wants to drop by Paragon Mall and just to do some survey on it. I guess thankfully he did and we decided to take 3 hours off our Sunday noon and checked the fair out.

In the beginning, we didn't think that it was already late for us to sign a bridal package despite marrying each other in September. It was until when every vendor that we talked to gave us that shocking expression that made us realized that we should quickly deal with this and not delay any longer. Heh.

The first bridal brand that we stopped at was Kuang Yee Bridal Collection. To be honest, I think they spent too much time talking about how new their new studio is and how they have another upcoming one. I think their idea of building all the outdoor 'seasons and styles' into their indoor studio is genius because not everyone can afford to fly to Japan to capture snowy-shots.

For us, we wanted everything outdoor. No roof. Yes to the sun and yes sweat all. We do not want the snow experience if it was going to be a fake one. So, I guess for this, it wasn't a selling point for me. Most of their concept is Korean-based and we do not really like that.

Oh and also they kept showing us a lot of similar photos (same locations) and stressing that those are not models because models will look too good to be true. But who knows right? Heh.

When we were about to leave to another bridal brand, the lady-boss came and sat next to Koay. She started offering exclusive items like upgrading my dress to a Designer's level and giving us more frames/photos.

With that, she wanted a small favor from both of us.

"I want to feature you both inside our 'promotional items' because I love the way you both looked like a couple. Very loving!"

Straight shocked. Bangga a bit la but mostly shocked for someone to say that. She then turned to Koay and asked if he's a professional model because he's very handsome. PANDAI CAKAP TO THE MAX.

After that, we walked to Anovia and Obsidian and spent quite some time in both places. Most of the packages are the same and their price ranges around RM3999 - RM4999. Must plus GST on top of that some more okay.

At this point, we were both so mentally exhausted. We went for a quick toilet break and that was when I realized that Koay preferred Kuang Yee Bridal Collection. Aunty knows how to do sales I tell you. She immediately got Koay's heart after all the handsome face and model. Hah. So funny. Adrian Koay will deny all these 'accusations' that I just made, but we all know deeply that compliments like these usually will affect one's decisions. HAHA!

Anyway, we decided that we would go for one more before deciding. We kinda had to decide that day because the promotion ends then.

We walked over to My Dream Wedding, which I have been eyeing from the start because the booth's set-up is pretty nice. Their backdrop photo also damn chun.

We sat down and a lady came and gave us a few albums to look at without saying much really. It's as though she was observing what kind of a couple we were and sell her package accordingly.

We opened the albums and immediately I was almost sold. Their outdoor photos were nothing like what we've seen so far and they are all unique and amazing. Koay felt the same. She asked us more questions related to preferences and style. Then, she offered us to the shop to take a look at the wedding gowns and tuxedos before saying yes.

We were not going to say yes so fast okay. She hasn't even told us the price yet.

As we were walking up (yes their shop is at Gurney Paragon Mall), she casually mentioned a few upgrades that she would give to us provided we sign the package that day and one of which got my attention was the upgrade to their most exclusive collection, the Platinum.

More on that details next time okay. 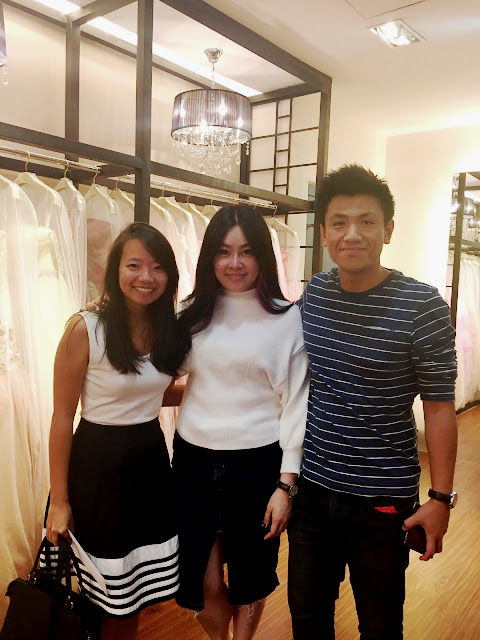 We walked around in the shop and realized that I was falling in love with this brand even more. I didn't say it out because I didn't want Koay to make a decision based on how I feel. It was more on what we both think of the price and items given.

We put on our poker face and as we talked even more on the package, the lady named Bennie kept adding complimentary upgrades for our package.

Maybe it's supposed to already be in the package but from what we gathered, at that time My Dream Wedding seemed to be offering more complimentary upgrades compared to other bridal shops.

Also, the best part is that our photo-shoot will not be in Penang, which was what we really wanted. We love our little island but in terms of photo-shooting, every place doesn't seem that unique anymore.

After all the talking, I looked at Koay and was looking into doing a bit more discussion.


"Go ahead with it babe. Just take this one!"

I straight opened my eyes so big that it's bigger than goldfish's. I kid you not. It's not a small amount okay, but I have to admit that deep inside my heart, I wanted the package too. The concept and style is very 'us'.

I am very blessed to be marrying this man and I must have been doing things right (heh) because for Koay to seal this deal without a long time to consider is just almost impossible.

To be honest, he did look a little worried later that day because we do not have all the money in the world and every time we spend on something else (wedding-related), it pains the pocket a little more.

But you know what?

He called the next morning and told me that it's all okay and that he wants to make me the happiest girl on that day because this is once in a lifetime event and as long as I'm happy, he would be also.

Okay, I did not cry lah but it was really sweet for him to say that. So not him by the way. Money is not the thing that makes me/us happy. For me, as long as I have him beside me, I'm happy :)

So, there you have it.

I will probably share more on the price and what we've got in the whole package next time. A big item is ticked and we're somehow glad that it's done deal.

Except for the fact that this year, I can no longer plan for any holidays :( Moolahs no more.
By Sarah Khoo
Labels: Marriage
Newer Post Older Post Home