Pregnancy Update 1: The Day We Found Out.

It was a normal Friday morning when I decided to collect my pee onto a plastic cup and drop a few of it onto a pregnancy test kit.

It has to be the first urine of the day if I wanted an accurate result, so my sister always say to me.

The story of my period is this - sometimes they come on the dot of the expected next cycle date and sometimes they are late a few days. Never nine days late though, hence the test early in the morning.

It's Friday morning so you can only expect that we were in best of moods because well, it's Friday! He was still asleep, covered to the neck in our most comfortable blanket.

I used the only test kit that I had and I made sure I read every word on that kit because I wouldn't want to do this the wrong way.

After dropping 4 drops of urine onto the test kit, as according to the instructions, I bathed and took a peep onto the test kit. Only one line was shown. Oh by the way, I did not have my glasses or contact lens on so it was just like a rough image.

I continued taking my shower (feeling a little sad already), then brushed my teeth and put my contact lens on. By this time, Koay was already done with shower and was getting ready outside.

I took the towel and wiped my entire being, and that's when I picked up the test kit and looked at it one more time.

This time, there is no way that I could see it wrongly right?

One red line so clear and another line pinkish appearing next to it.

I remembered that my hand was shaking because I was in shock and overjoyed! The last time my hand shook like this was when he proposed. This is surreal I'm telling you.

He looked at the test kit and when he looked at me again, I knew that he saw the same thing too! 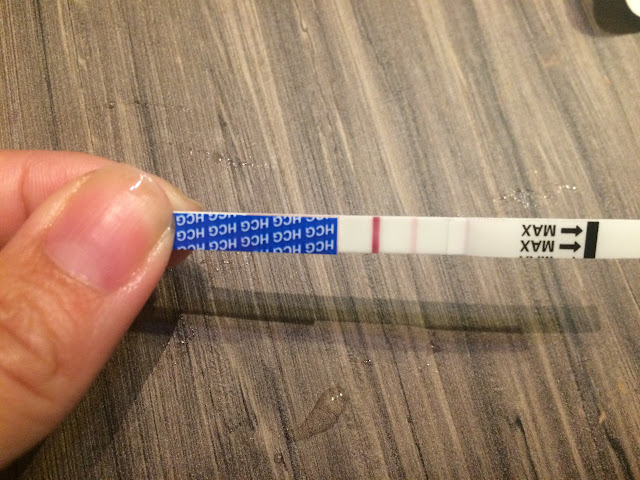 We smiled, and hugged and smiled even more. Such a indescribable emotions to describe really.

We needed another confirmation (a few more I mean) because the second line was just pinkish and not like a solid red. And also I have been having cramps every now and then. I was sure that I was not pregnant because of these cramps, but the period never came so yeah.

We waited till the next morning to test again.

I googled and Youtubed and people say it's normal to experience cramps on the early stage of pregnancy! OH MY! Imagine my excitement at this point! I was like 80% sure that there is a little something in my uterus. Hence, my tweets on Twitter. Dropped hints here and there because syiok.

This time, I tested on 3 different pregnancy test kits and all came out positive! We are so pregnant I cannot even let that sink in yet. Heh. Apparently, according to Google and other moms out there, if you try three times and all three sticks show positive, you are most likely confirmed to be expecting. It's insane.

That was our Saturday and knowing this, we called our family and told them about it. However, we decided that we would only tell our close friends (one-by-one) and the world via Facebook after a confirmation from the doctor, which will be mentioned on another post.

I will also post up all the 4 pregnancy test kits next time. All the money we have spent on these kits, it's almost enough to go for Tao buffet. Heh.

For now, we are letting this reality sink in :)

So yeah, we are leveling up, and we're going to be parents in less than a year! THAT IS ABSOLUTELY INSANE!

Our lives gonna be changed forever in about nine months' time. We are beyond excited!

On a side note, this is a special shout-out to Eunice Ch'ng. The photos below are self-explanatory so yeah. We will be waiting for your good news next! #nopressure 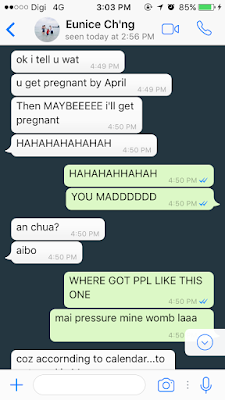 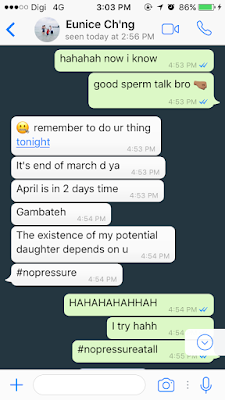 Gabriel Ch'ng, looks like you will be getting  a lot busier this month :)

April is such a good month don't you think so?