Twenty nine days ago. Can you figure out when?

It was a spontaneous thing. We wanted to do something but couldn't agree on one thing until someone suggested kayaking!

We went to the Penang Water Sports Centre at Tanjung Bungah but it was closed. Should open on Public Holiday right? Maybe no one wants to work on Thaipusam day. So, we googled and made some calls to find out that there is another place that might have kayaks for rental.

It's called The Lost Paradise Resort, not very far from Penang Water Sports Centre. We parked our cars and met with the owner of the resort. He told us that the kayaks are for in-house guests only. To cut the story short, he was okay to rent us the kayaks but we didn't take it because we were short of one kayak.

No man shall be left behind so we decided as a group that we would go to another place. This time, our source told us that the Sports Corner behind Flamingo Hotel does not only rent out banana boats, para-sailing and other motor sports stuff. We thought it would be super pricey but decided to give it a try nonetheless.

We went there and bargained with the uncle and finally he gave us a go at RM15 per person for one hour. Can extend another half an hour too! Good deal right?

I thought that it was pretty cheap, given that he was so lenient with the duration that was given to us and also  their kayaks so new and bright in colors. Win.

We paired up quickly and agreed to kayak all the way to the island. That famous island, also known as Pulau Tikus. The story was that the island used to be infested with rats, hence the name.

This abandoned island doesn't seem to be so far away, right? Wrong! It's so far okay. We kayak so long d still cannot reach. So torturing. Heh. Quite scary if I can say. I don't have a phobia of being out at the sea but I am quite afraid when it's only us and no one else is around. It feels like sharks can just jump out and eat us.

I blame all those shark movies. People say there won't be any sharks here, too shallow lah, too dirty lah but still! You never know what's underneath! Never know! It's a territory that is so unpredictable and mysterious.

We got there and found the uncle who rented us the kayaks, already there. So unfit all of us. He was walking towards the rocks with a hammer and a screwdriver in his hands.

We looked at each other and hesitated a "Yes..?"

I was quite reluctant to try it because no Tabasco sauce and no lemon okay. This is like super fresh from the sea kind. What if I hate it and forever scared of eating fresh oysters? Turns out, it was yummy and really fresh. Taste of the sea. Hmm.. 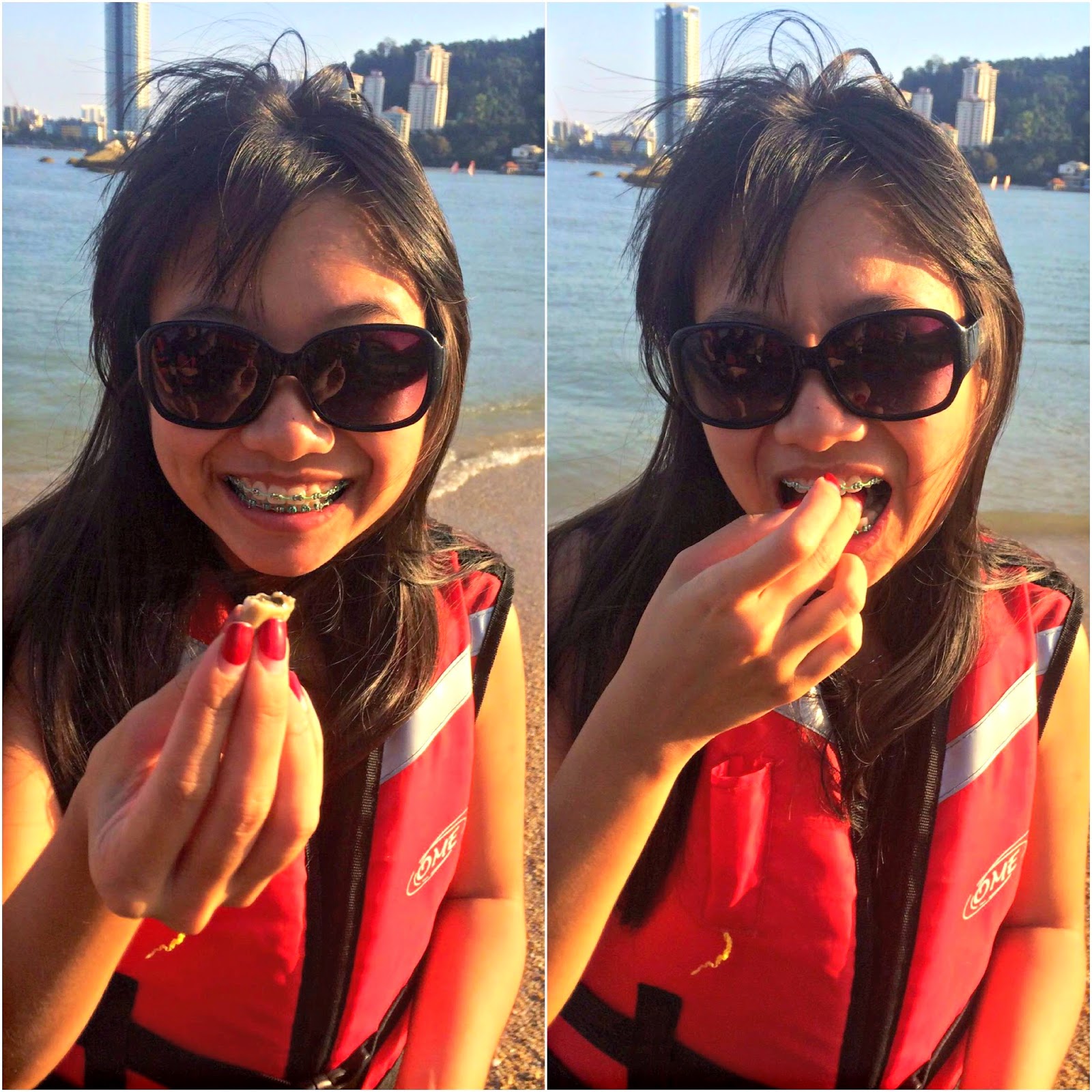 It takes quite a while to persuade these two to try it out. What is this man. I thought you guys are adventurous? Heh. They were so scared that they didn't want to chew it. Just wanted to swallow it. What's the point right? Hah. The uncle took us on some mini-exploration-trip on the island. There is a graveyard on top of the island. Probably just a few big rocks above in a sheltered house. A grave of a Muslim man who is believed to have found the island or something. Quite eerie actually because there is like a cloth on top of the cemented grave but at first glance, it looks like a coffin. So yeah.

We walked around and just kinda chilled while the uncle goes hunting for more oysters for himself. Heh.

We (only Andrew, Joshua and I actually) soaked in the water because the rest scared of jellyfish, others took photos of sunset and Gary blocking the sunset and just don't know do what else. Hah.

It was time to kayak back to our favorite island and I initially thought that it was going to a tough one because my arms were already starting to sore and also feeling a bit lazy after the water-soaking session.

He did most of the kayaking because he insisted that I just sit back and enjoy the rest of the sunset. Best.

My favorite photo of that day below. My sister, Vanessa takes the best photos of both of us. She just knows when to get that camera rolling. Heh. For sure worth investing a good camera-of-her-dreams for her but now, no money so cannot yet.