Will You Marry Me : His Side (Part II)

Before you continue with this post, please read my Part I first boleh? Her part also you can go read first if you want..

The wait for this backpack trip felt really long. Our 12 days trip to Vietnam, Cambodia and Thailand needed a lot of planning in advance just in case you didn't know.

The funny thing was, Ryan Yeoh and Naomi Mair both asked me if I was going to propose to Sarah during the trip. Terkejut for a moment.

Then recently, I asked both Ryan and Naomi what made them thought like that.

He said, "Because you rarely go on a holiday, usually Sarah go only one!"

Then, when I asked Naomi, she just said, “I got a feeling laa…”

So, Andrew and I tried to find ideas on how to propose during the trip. Then Andrew found in google saying things like Angkor Wat is one of the most romantic places in the world to do a proposal. At first, I doubted it because I didn't want Sarah and I to be both sweaty and dirty during the proposal.

But after that, I thought why not? We are rugged like that.

Hot sun, sweat and rough adventures are all bits and pieces of our relationship.

The plan in the end was to go with the flow. When the timing and setting is chun, just hor ee lok! Bend down and pop the question!

Few days before Sarah, Carmen, Jack and I left for Ho Chi Minh, I met up with Andrew secretly to pass the ring work-place. Also, at the same time, to pass him the Thai Baht and USD that we change for him and Beverly. Both of them will meet us few days later in Ho Chi Minh because they have got to work.

After passing the proposal ring to him, on my way back, I felt that something felt missing from the whole thing. So chun right, there was florist shop in front of me, so I stopped and got some roses that will last for a lifetime a.k.a. fake/plastic roses so that the rose can complement the ring.

Oh ya, the only reason I chose to pass the ring to Andrew was to make sure Sarah doesn’t suspect anything of course. Since she likes to put things and take things from my bag, I cannot carry the ring with me, at all. Teehee.

Holidays started in Vietnam. Banh mi, pho, raincoat, coffee. Andrew and Beverly joined us two days later and he has this tukao pouch over his shoulder the whole entire time, even when he sleeps.

Throughout the trip, Andrew and I made a lot of those “jeng jeng jeng, you know, I know, she doesn’t know” eye contact.

Then we stopped for few nights at Phnom Penh before heading to Siem Reap!

The night before the proposal, Jack and Andrew kept asking me.

“Are you ready to be a man tomorrow?”

My answer every-time was always G!

We woke up really early that morning as we wanted to catch the sunrise at Angkor Wat. When we got there, there were like thousands of people standing beside the lake already. I was thinking, there must be a nicer place than that.

To propose in front of so many people would be awkward! We walked around there but it didn't look like there was going to be another place that we could see the sunrise perfectly.

Then, I decided that we have to do it there, by the lake. To make it not so obvious, I asked Sarah to take picture of us laughing at those people waiting for the sunrise beside the lake! 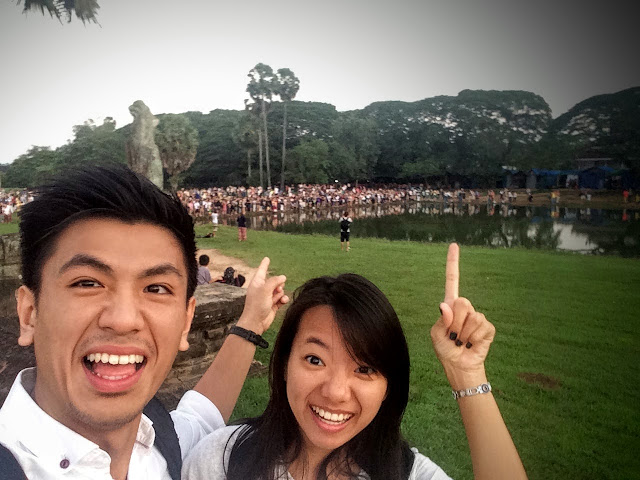 Then we headed towards the lake where the crowds were.

Not long after that, we heard people around us started saying “Woahhhh!"

Then I was like, this is it! All I need now is chun timing? So CHUN!

When the sun came up, what everyone did was take picture right? You know la, Sarah Khoo surely wouldn’t want to miss her instagram-worthy pictures one! So, she decided to join everyone else and went ahead by the lake to snap all the shots she could. 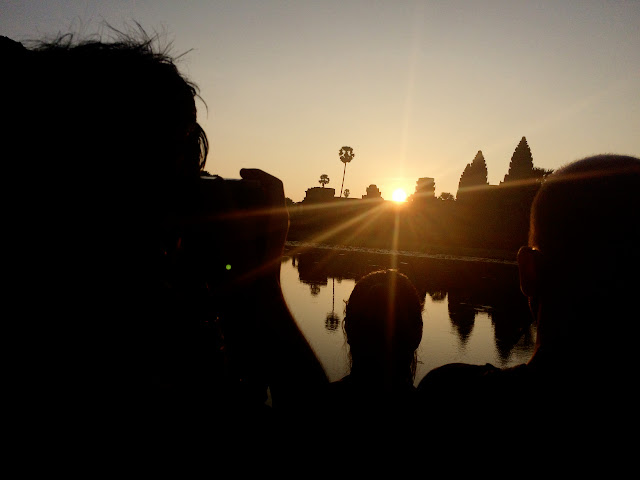 Then Andrew signaled me.

Knelt down on one knee on the muddy side of the lake, looking upwards for the big monster in front of me to turn her head over. No ,she did not turn back despite me calling her a few times. She was too into getting that perfect sunrise photo. So, I (actually it was Beverly's voice that she heard) called her name again and again, of course with the shiny thing on my hand.

So, I asked her the QUESTION!

WILL YOU MARRY ME?

And I heard nothing from her..

She just kept closing her face or mouth nya. Then she nodded.  So I put on the ring on her second finger from the left of her left hand which was shivering pretty badly. That's when I realized that my hands were shivering too. The rest is… 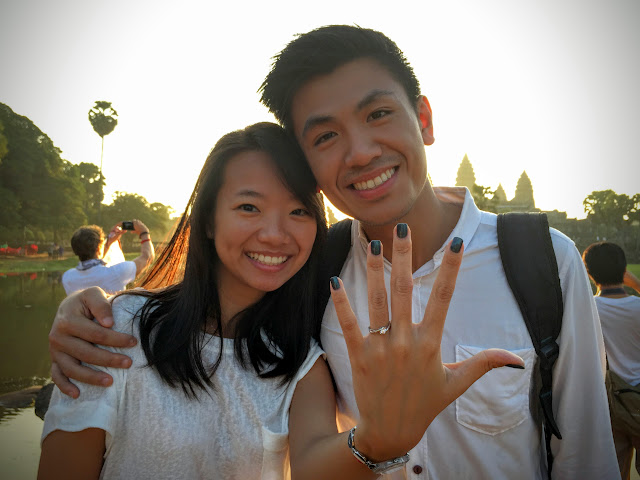