Last night we had dinner at home and off we went to Tesco in two separate cars (so that he don't have to fetch me home again from his place).

And we actually ate again before we started shopping for groceries. Sticky mango rice at his friend's shop, The Little Siam :)


Then, as we push the trolley down each alley, we were suddenly super motivated to want to start eating healthy. JUST SUDDENLY!


Then, we find ourselves looking for healthy stuff and then he started buying a lot of things to which I thought was going to be his breakfast. Nope, not breakfast. All the ingredients are for supper the same night. I was like, "Wuut? Seriously? Who's going to cook?" He looked at me and smiled. Of course I smiled back too and happy girl I was.


He saw pita bread with herbs and there he goes. Choosing cucumber and onions and breast meat. I was ready to eat, though I don't exactly know what he's going to do or how he's going to cook the ingredients and stuff them into the pita bread.

We went back to his place and we started cooking. I said WE because we both did. He told me he planned to cook the fiilings of the pita bread with chilli sauce, and I decided I was going to grill the breast meat with just salt and pepper. So, we kinda had a "let's-see-who's-chicken-taste-better-contest.


Of course mine tasted fabulous. I know he was very shocked when he tasted my chicken because in the back of his mind, he thought that it would a rather tasteless chicken since I had no sauce with it. AND HE LIKED MY CHICKEN BETTER THAN HIS! :)


Actually, his overall dish was super yummy. I didn't eat a lot of it because my teeth/gum was hurting, but I love it! But mine is like a lot healthier :)

Oh and he washed all the dishes WILLINGLY. Ahhh, this one needs to continue till death-do-us-part. 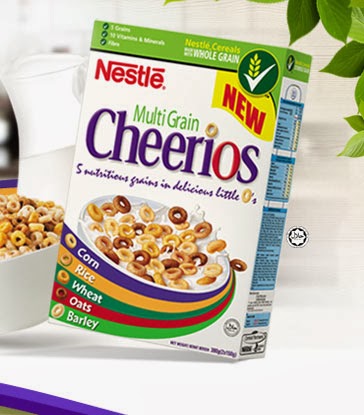 Anyways, I have no idea why I just spent so much time talking about the supper when I wanted to talk about whatever the title said.

I am not someone who eats cereal and milk in the morning. I don't even like milk. And I don't usually eat breakfast (though doctor recommened it). So, since we suddenly got the motivation (actually it could be because I found out that I've gained 3.5kg minutes before shopping begins), I decided why not try Cheerios. The only time I heard about anyone talked about Cheerios was when I watch Glee. I figured it should be yummy since it's always talked about in other movies. Then, Koay said that have to eat cereals with milk if not it won't be nice. Problem is I don't like milk. He suggested chocolate milk, so okaylah.

I actually can't wait to start eating them for lunch and dinner (not all the time), just when I don't feel like eating anything else or when I feel fat. Hahaha.
By sarahkhooyw
Labels: justBLESSED, justBONDING, justHEALTH, justKOAY, justLIFE, justLOVE, justMONEY, justSHOPPING
Newer Post Older Post Home