It's been so so long ever since I ride a bicycle. The last memory that I had was me cycling around my uncle's house in Lip Sin. That incident where I crashed and two feet landed underneath a parked car as I was doing either a U-turn or a turn (I can't remember). And I remember my big toe was bleeding and the pain was horrible! Yup, probably that's the last time I ride a bicycle.

That didn't stop me from giving it another try after so many years. I actually kinda forgotten about the incident until when I tried doing a U-Turn this time on a real road WITH CARS! (a lil traumatised)! Oh, and best way to protect your toes is to wear a covered shoe or sports shoe (which neither did I had it on)

Thank God it did not rain. In fact, the weather was perfect for cycling. We all met at Logan Road and carpool-ed to Love Lane (I think that's the road's name. Either that, or it's Leith Street). 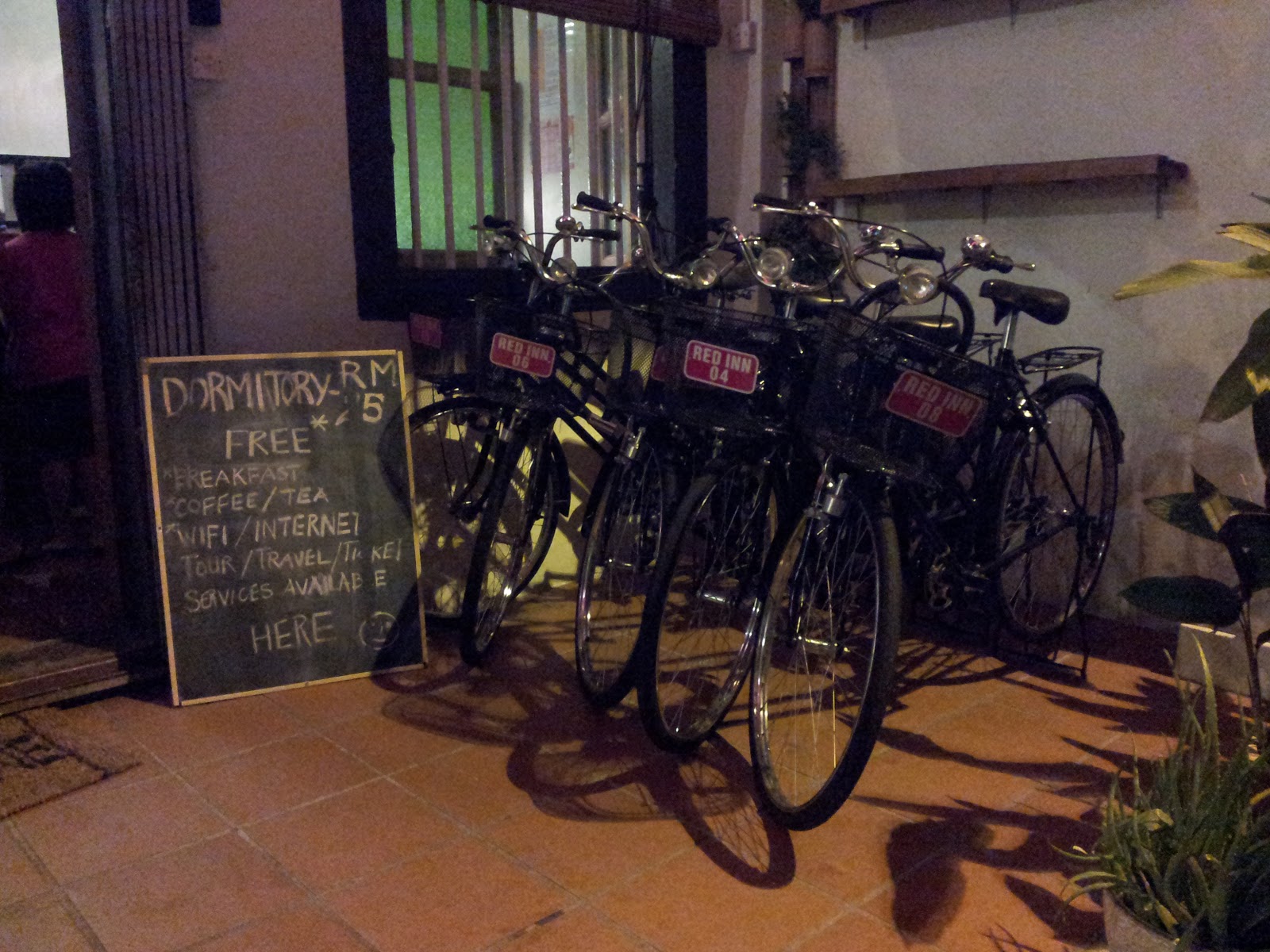 we went into a motel/hotel (however you see it) called Red Inn and rented 6 bicycles. Deposit per bicycle is RM100 (but we didn't have so much) so we paid RM50 for each as deposit and another RM15 for the rental. And that you may use the bicycle for the whole day. Pretty awesomely cheap :) 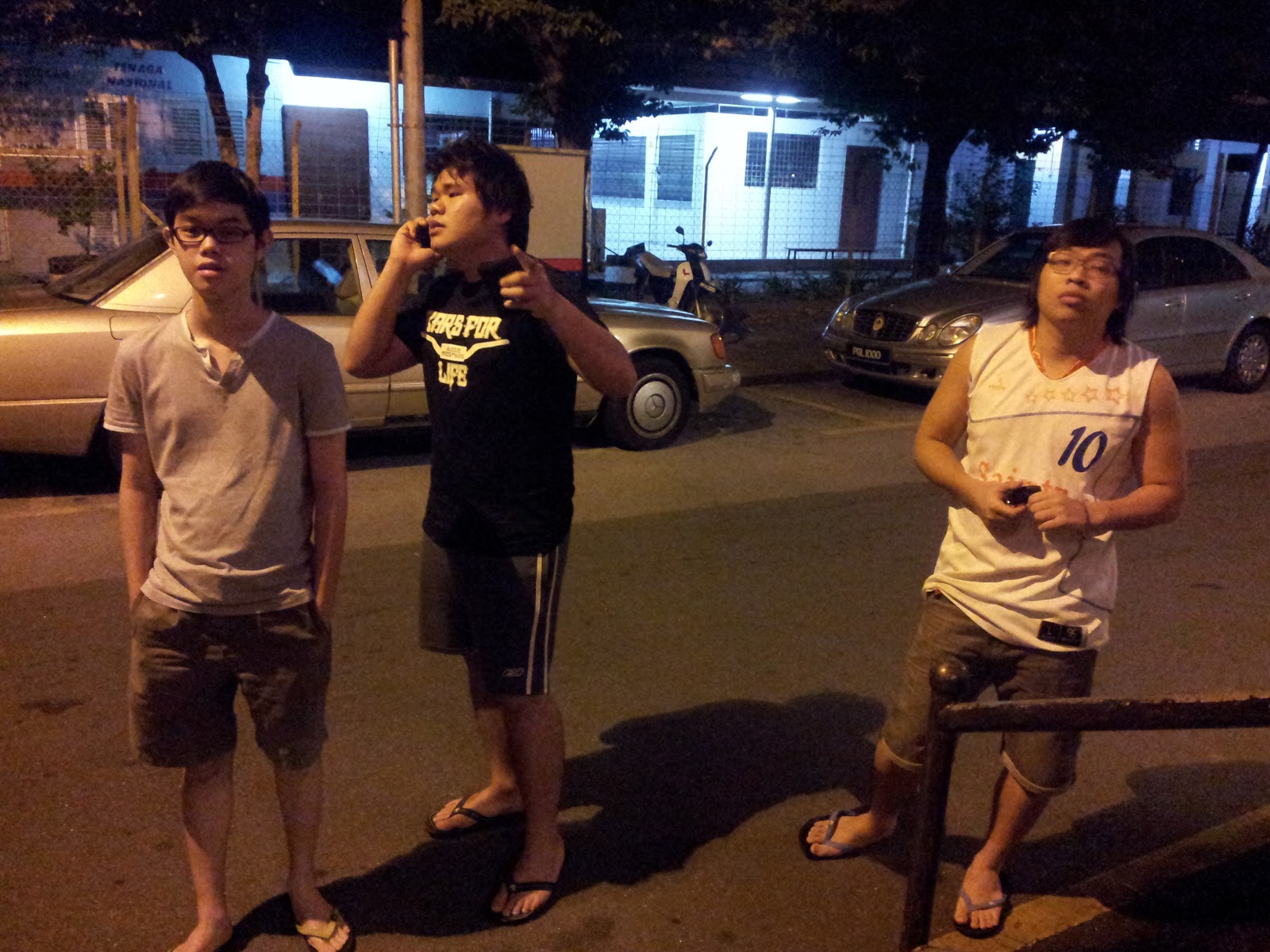 The boys. One more missing in the picture because they were somewhere else, the siblings. 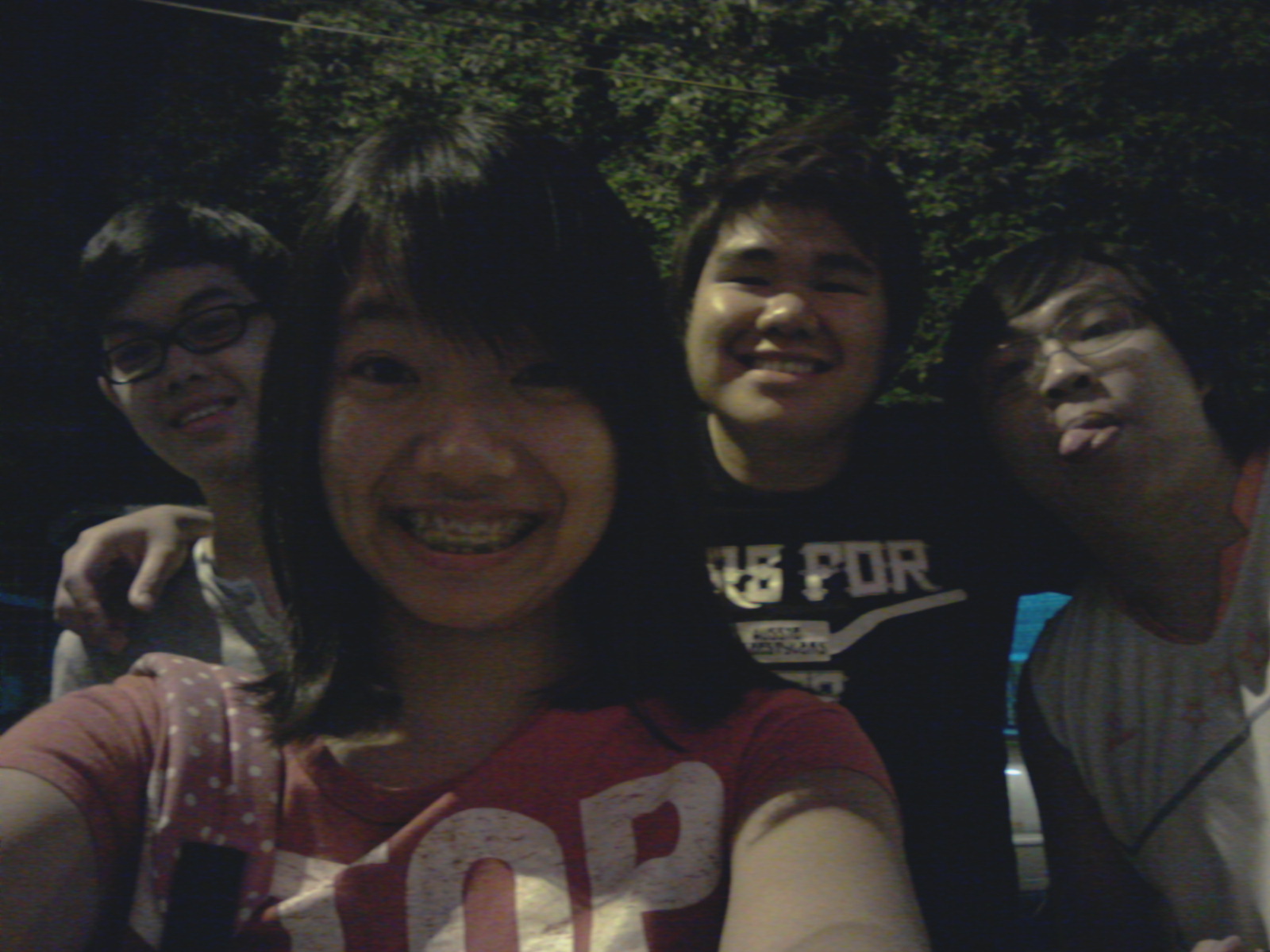 So, we kinda vained a lil while waiting for the Leows. 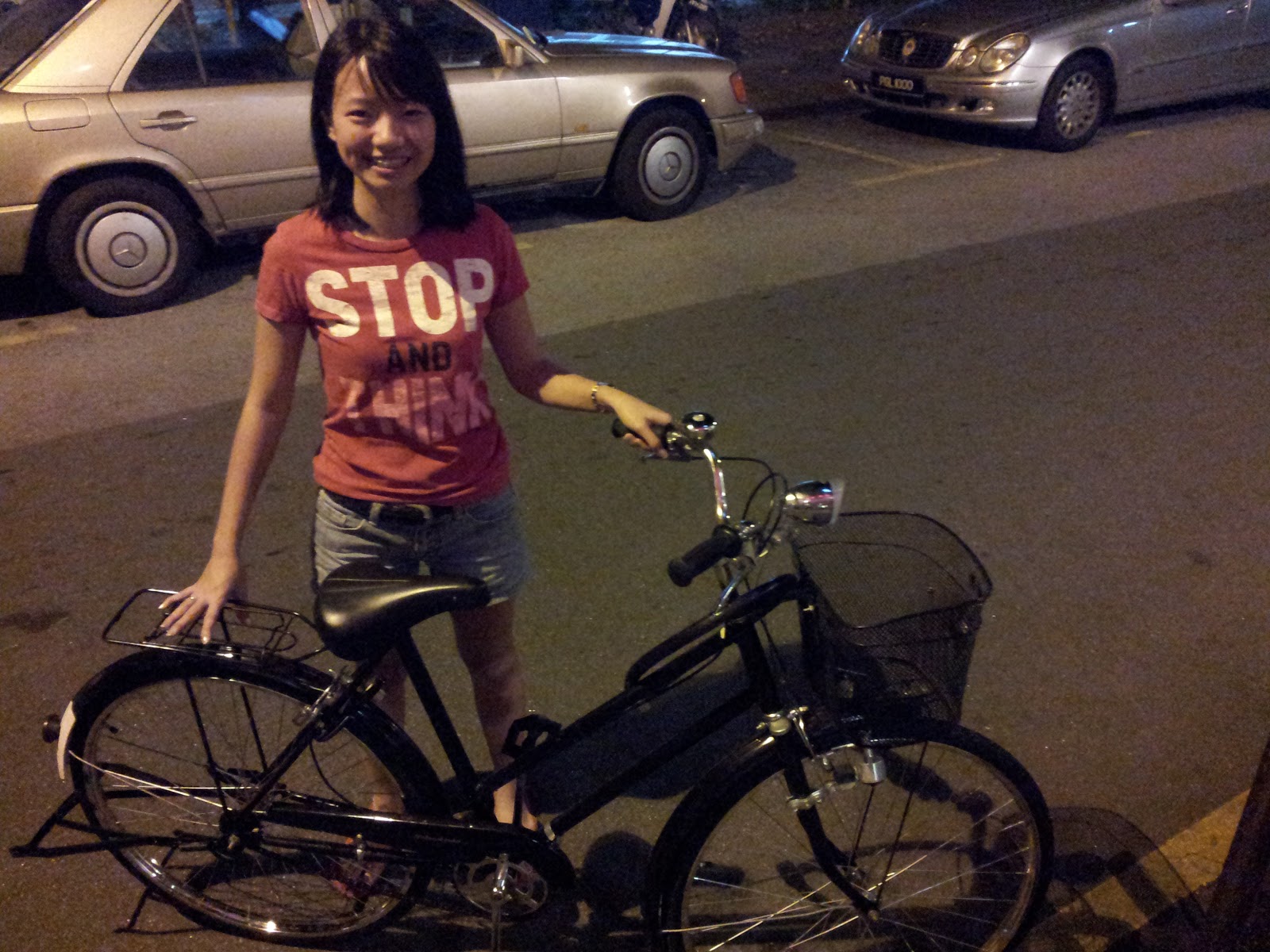 I took the one with the lowest seat, and that my legs weren't long enough to touch the ground! 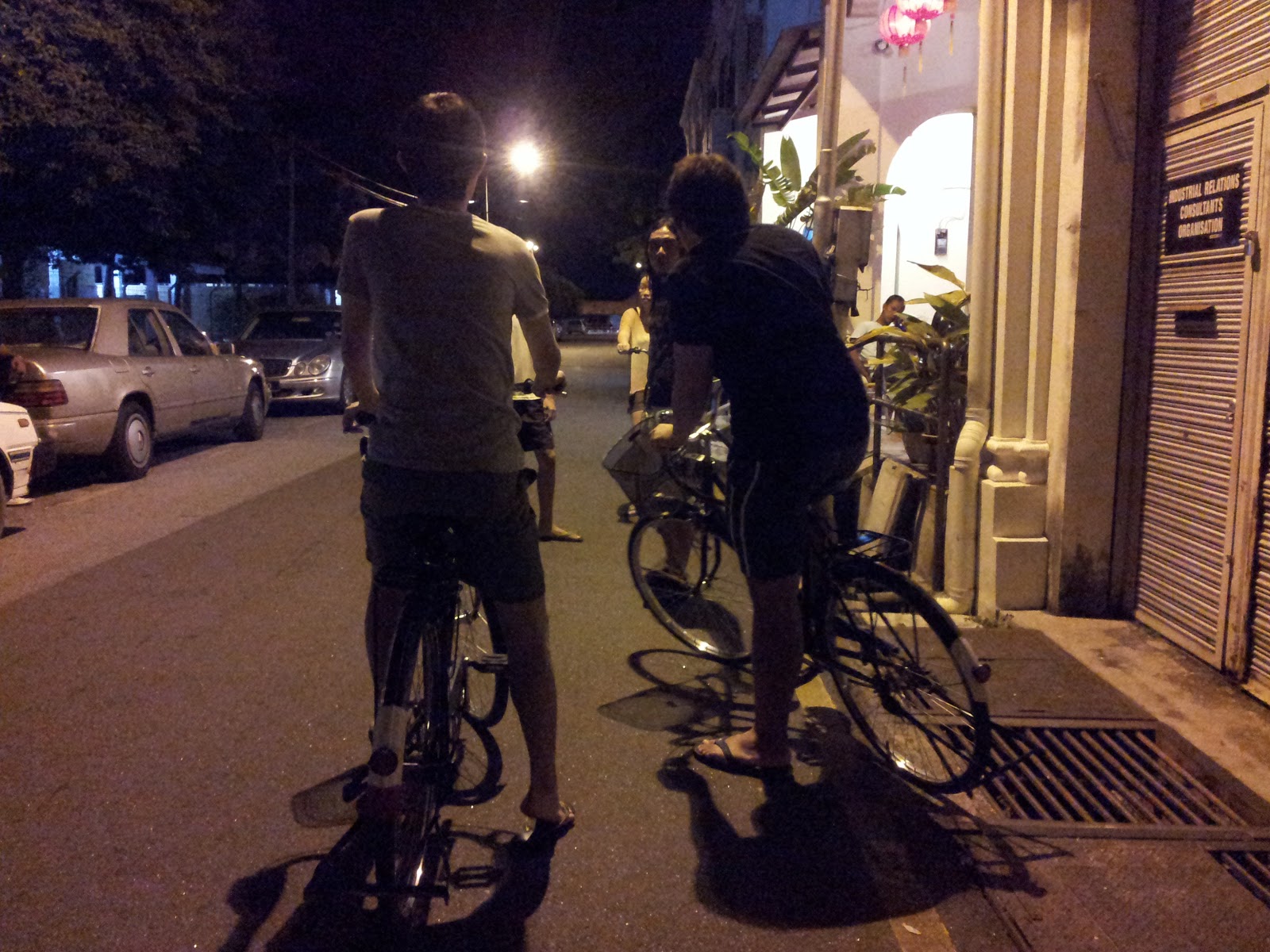 Discussing on some issues. (cos we had to rent the other bicycle from another 'branch' which is not very far away). 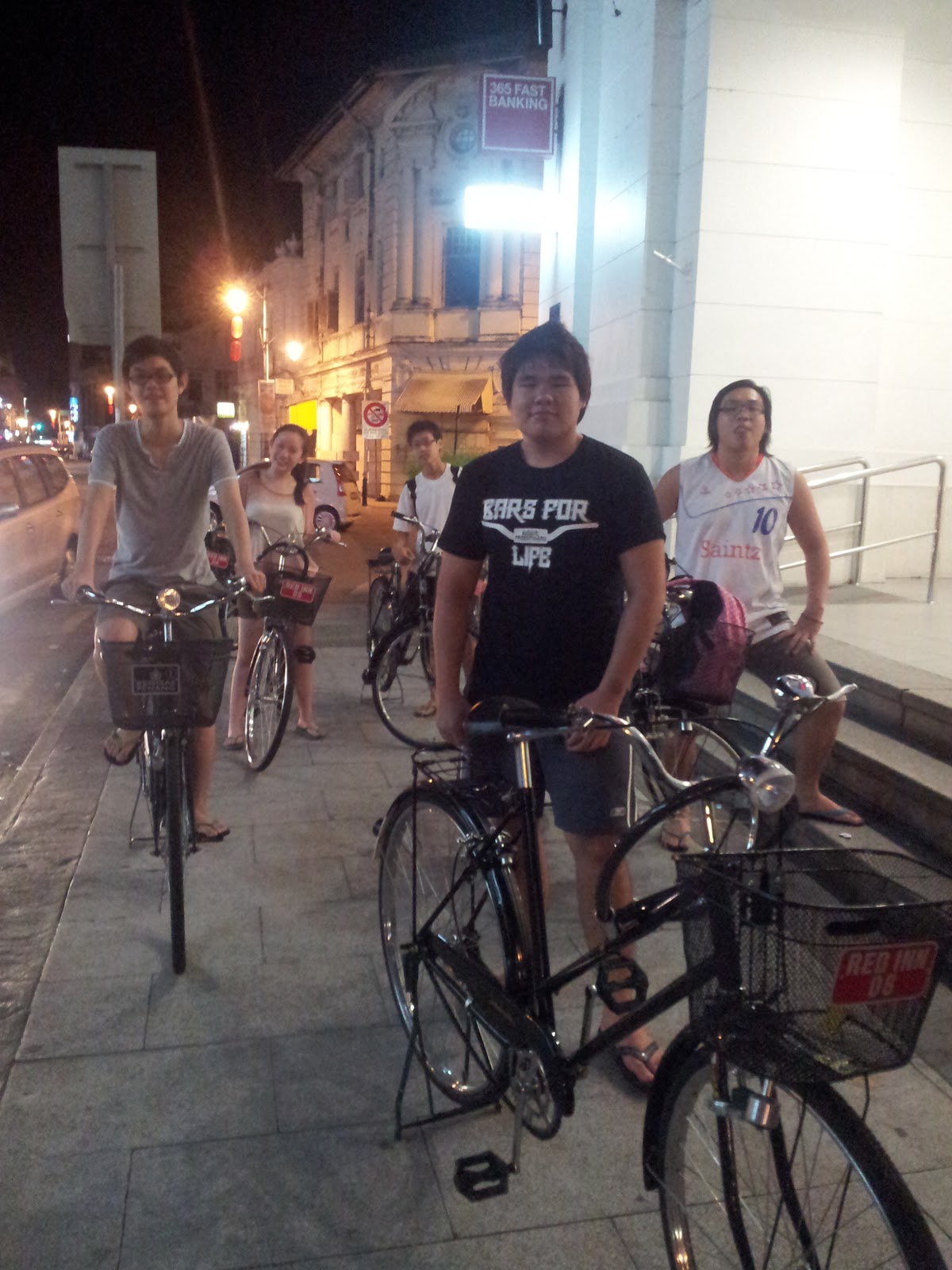 Quick stop outside CIMB Bank. It's so nice to cycle around at 11pm onwards cos there were less cars and less humans. 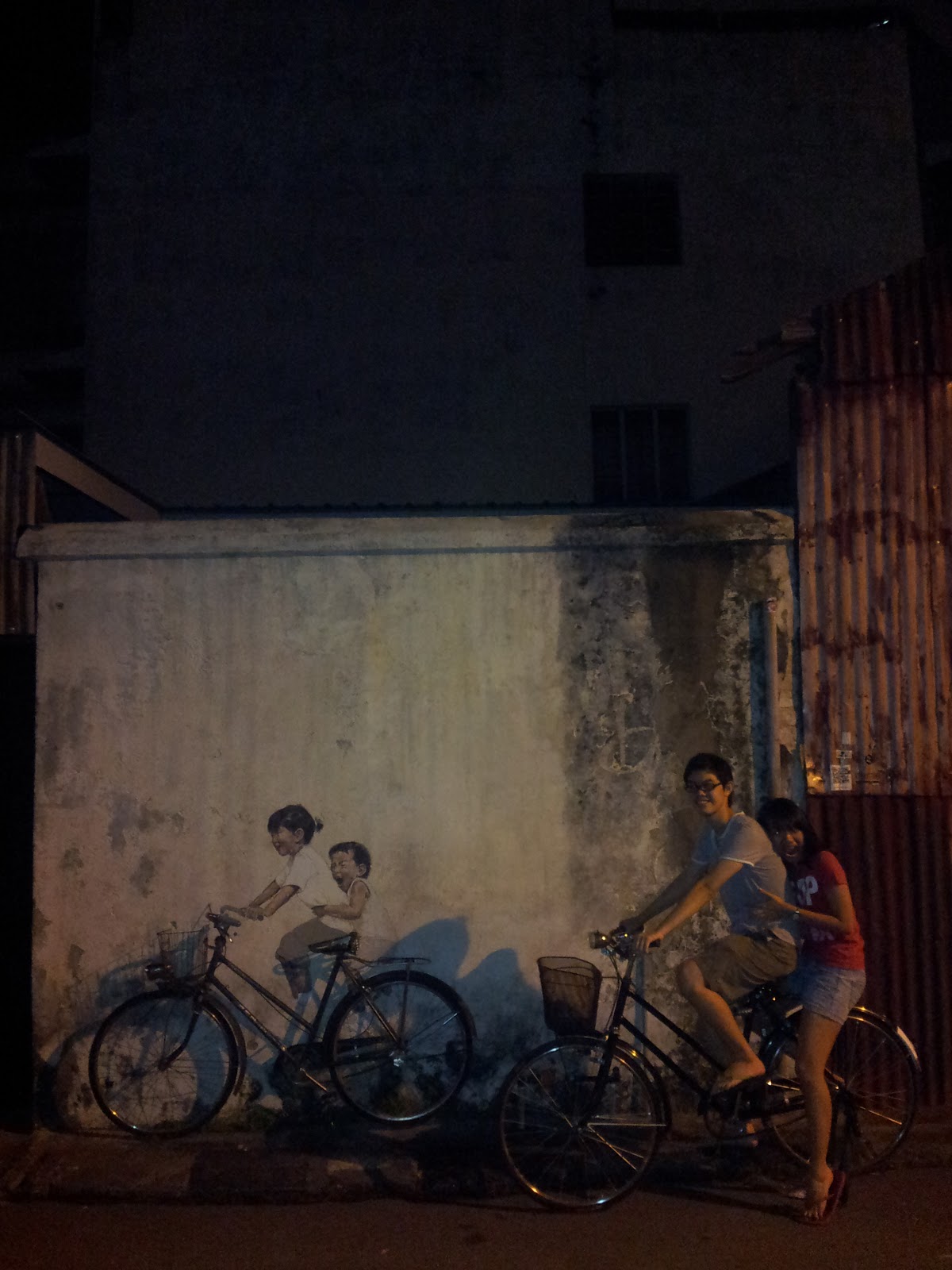 How can we not drop by the place where everyone talks about in facebook. My first time of being here actually and taking a picture of it of course. 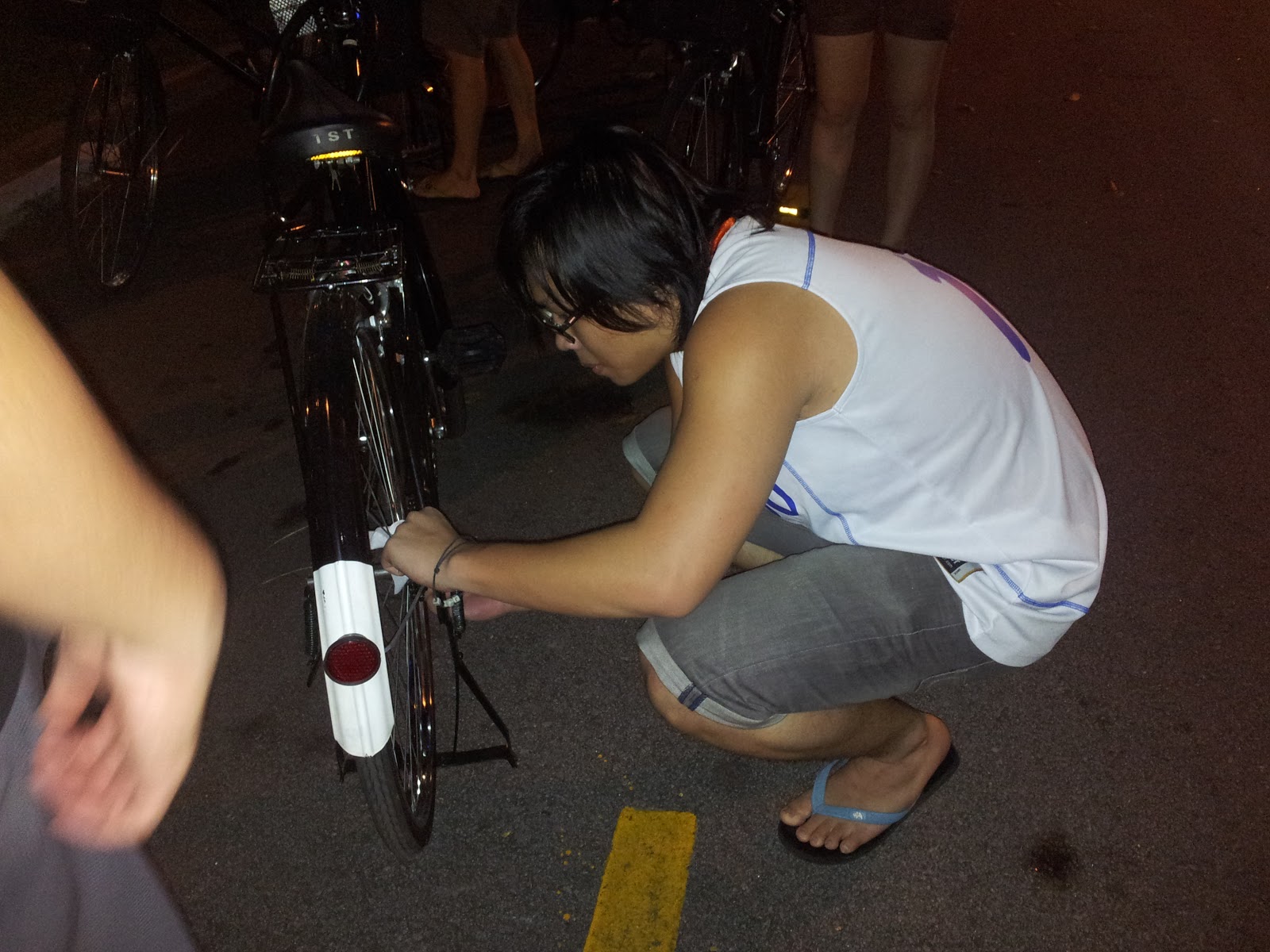 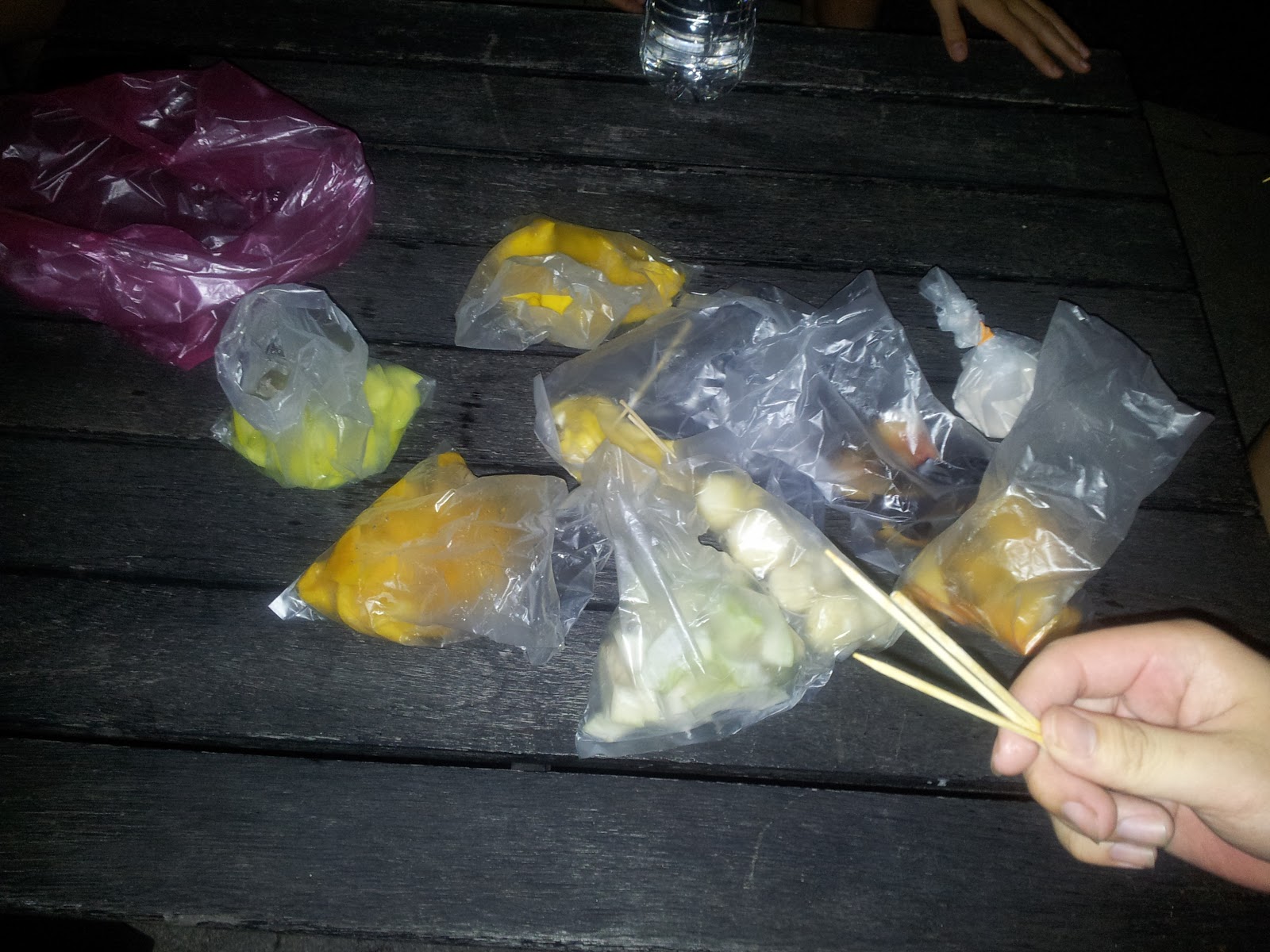 And then we had RM27 worth of fruits, bought in Esplanade. Mahal betul. Pre supper for us. After that, we went to Pelita and we ate rice! Cycle for one two hours straight got so hungry! Haha. 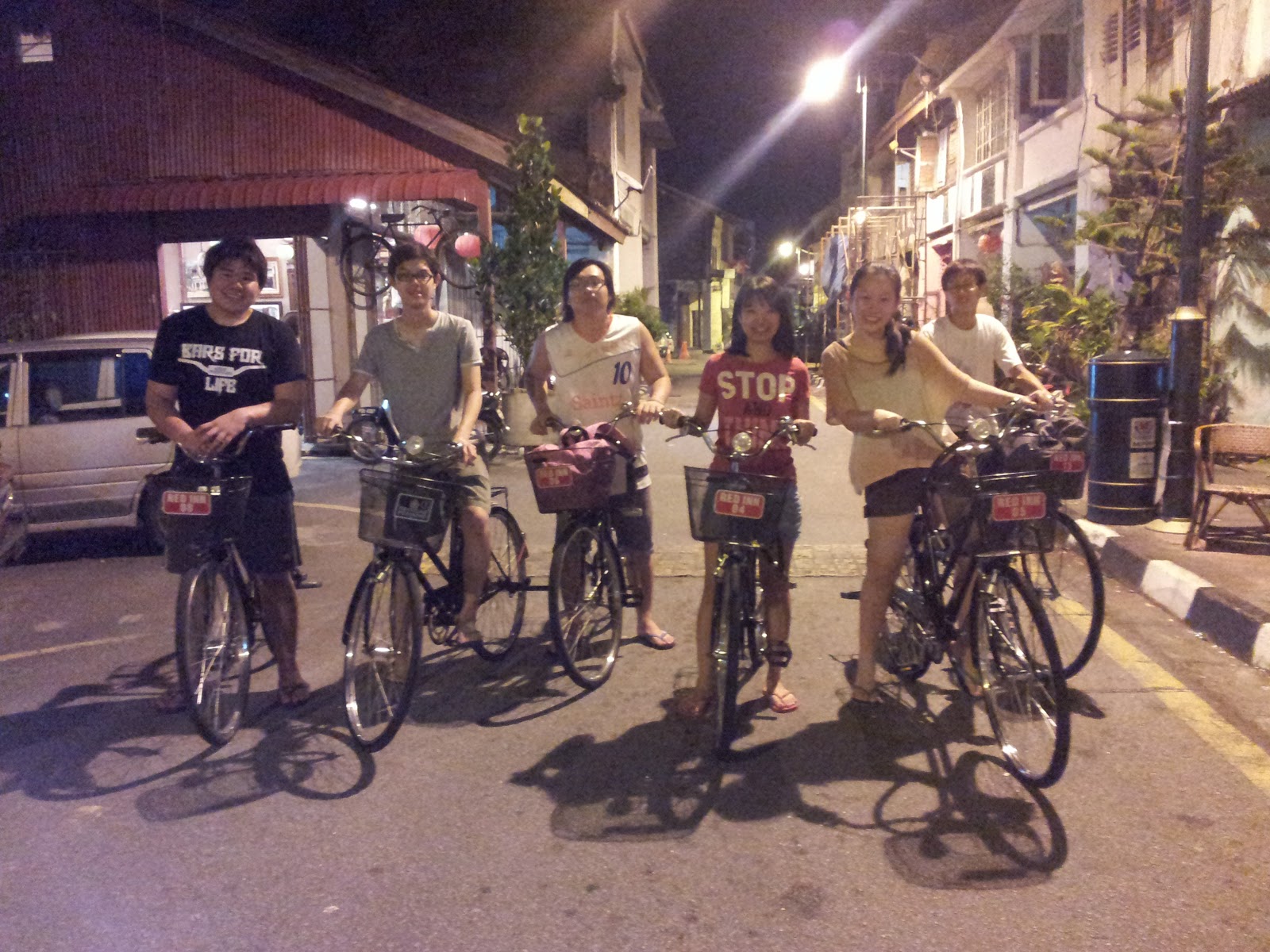 In the end of the day, i did not injure my toes. I did not fall. I did enjoyed myself a lot. And I did have sore butt in the morning. Night cycling is so much fun! Maybe another type of bicycle would be nice (with a softer seat and shorter ones too)