I think I can say that this year's birthday is the simplest and the one that i enjoyed most by far. I realized now the more simple it is, the better. No, age is NOT catching up. That's NOT the reason obviously :)

He kept looking at his watch on the 9th Feb so that he will be the first one to wish me. Baby girl who was sleeping next to me was already sleeping soundly. The moment the clock hits 12:01am, I mentally tell myself, "That's it. You're now 26. No turning back man, no turning back!" Before I went to bed, he prayed a birthday prayer over me. The first 5 hours of being 26 was spent two times in between carrying Sha Lynn and singing Twinkle Twinkle Little Star until she falls asleep again.

The next eighteen hours..

So, if you have read the post where I mention about what koay got for me, you probably could figured out where he brought me on my special day.

TO THE BEACH! Okay, wait.. More like to the ROCK! I woke at 510am (partly because Sha Lynn was sleeping next to me and she was crying that time) and got myself ready. I asked him before why we needed to go so early for fishing. His reply was, "The fish all just wake up and they sure very hungry!"

First stop at 7am! Who drinks iced caramel macchiato early in the morning? WHO!? 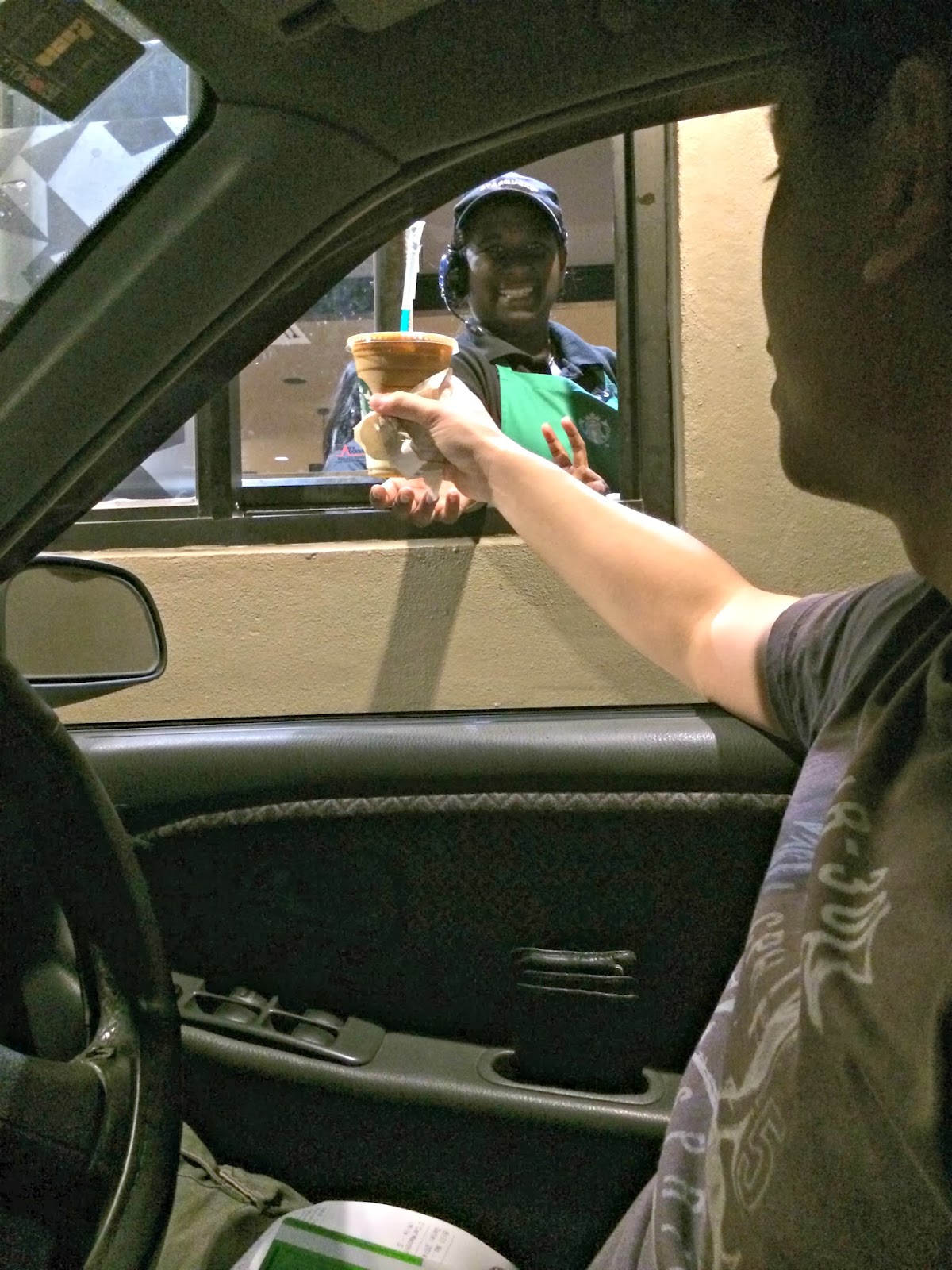 Drove to the market to get our baits. Sardines and prawns. Then, we parked and waited in the car for a while because it was too dark to go down still. While waiting, Koay prayed for me, us and the entire day. Then, it was time. TIME TO GET THOSE FISHES!

The rock that we were on for a good four hours! Big and strong :) It became my favorite place immediately. 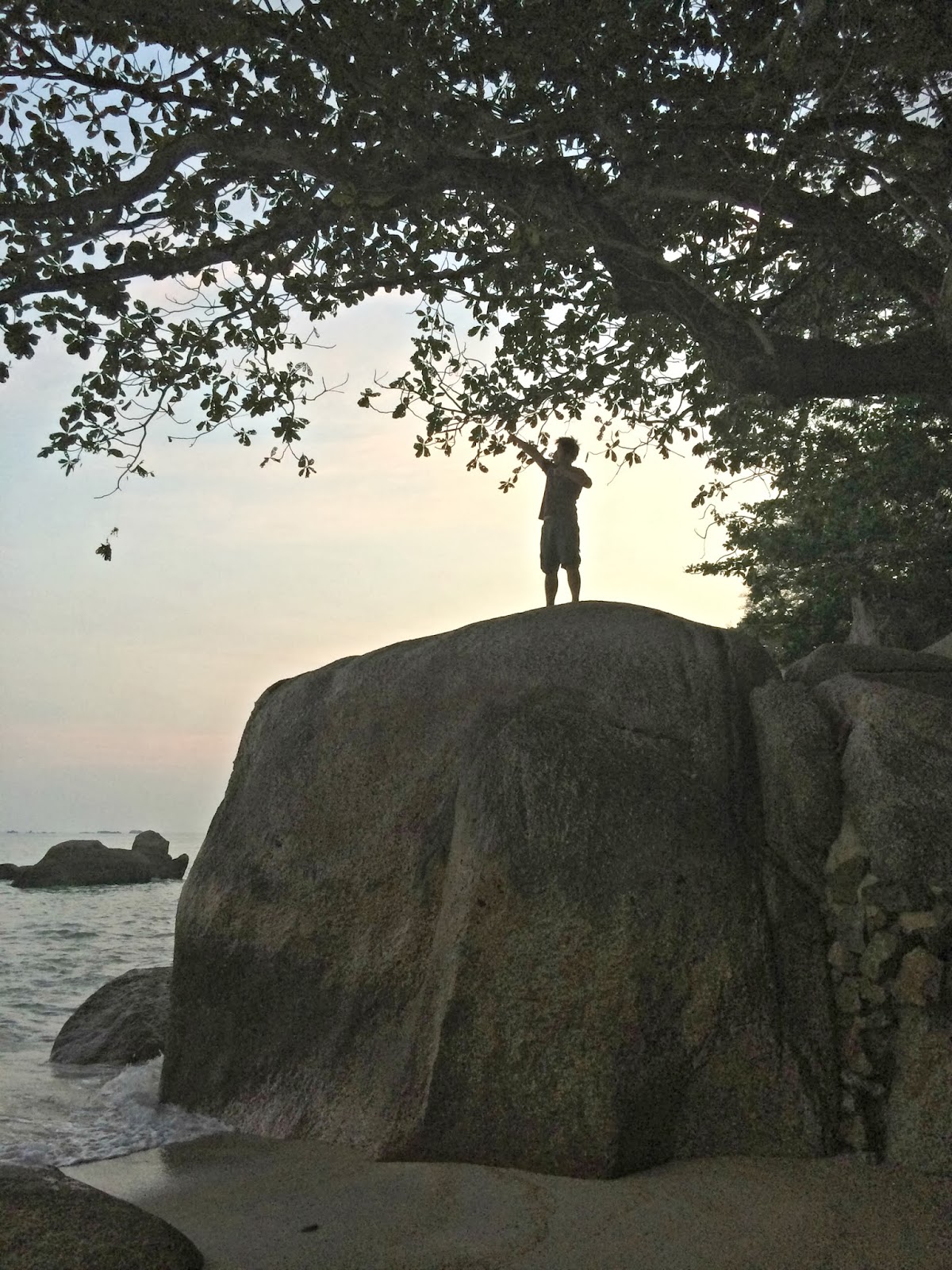 The rock is so high up that it's so beautiful from up there. Beautiful and very dangerous! Hahaha. Threw in my first bait of the day and... 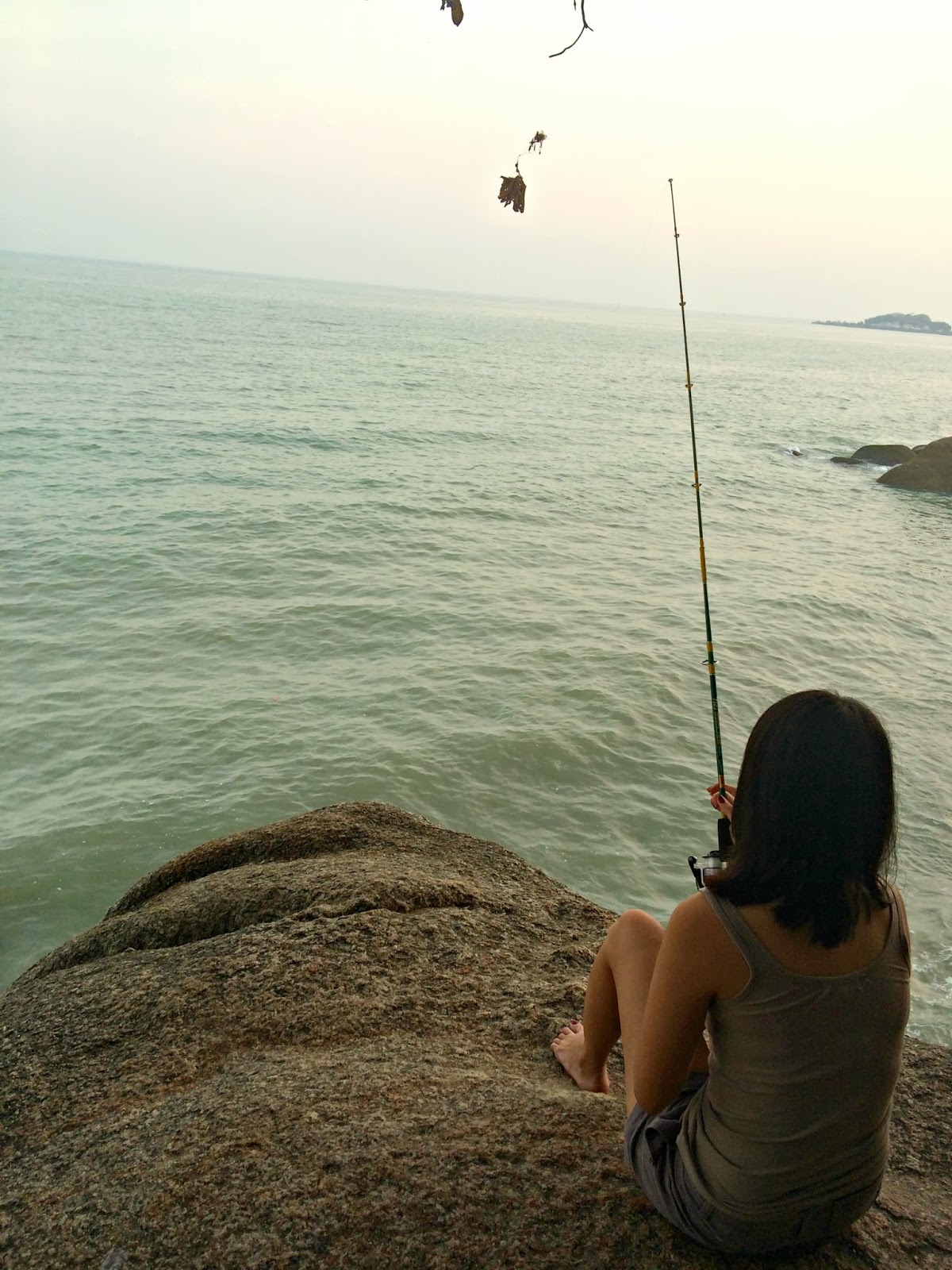 WALAA! That's less than a minute okay! Maybe he's right about the fishes waking up and feeling hungry! Heh. 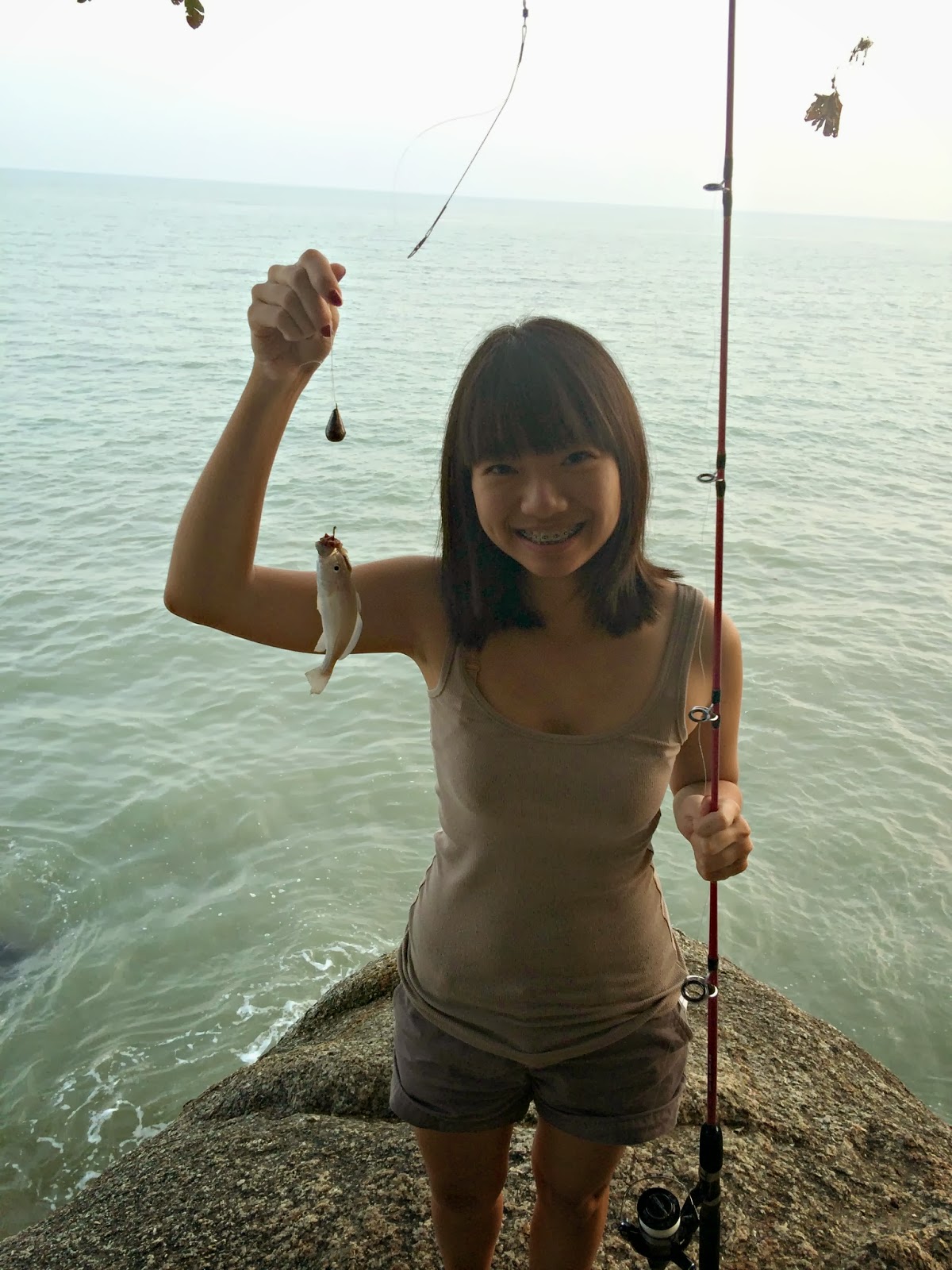 He also got one almost immediately he threw them in. I'm not exaggerating! Seriously it was that fast! 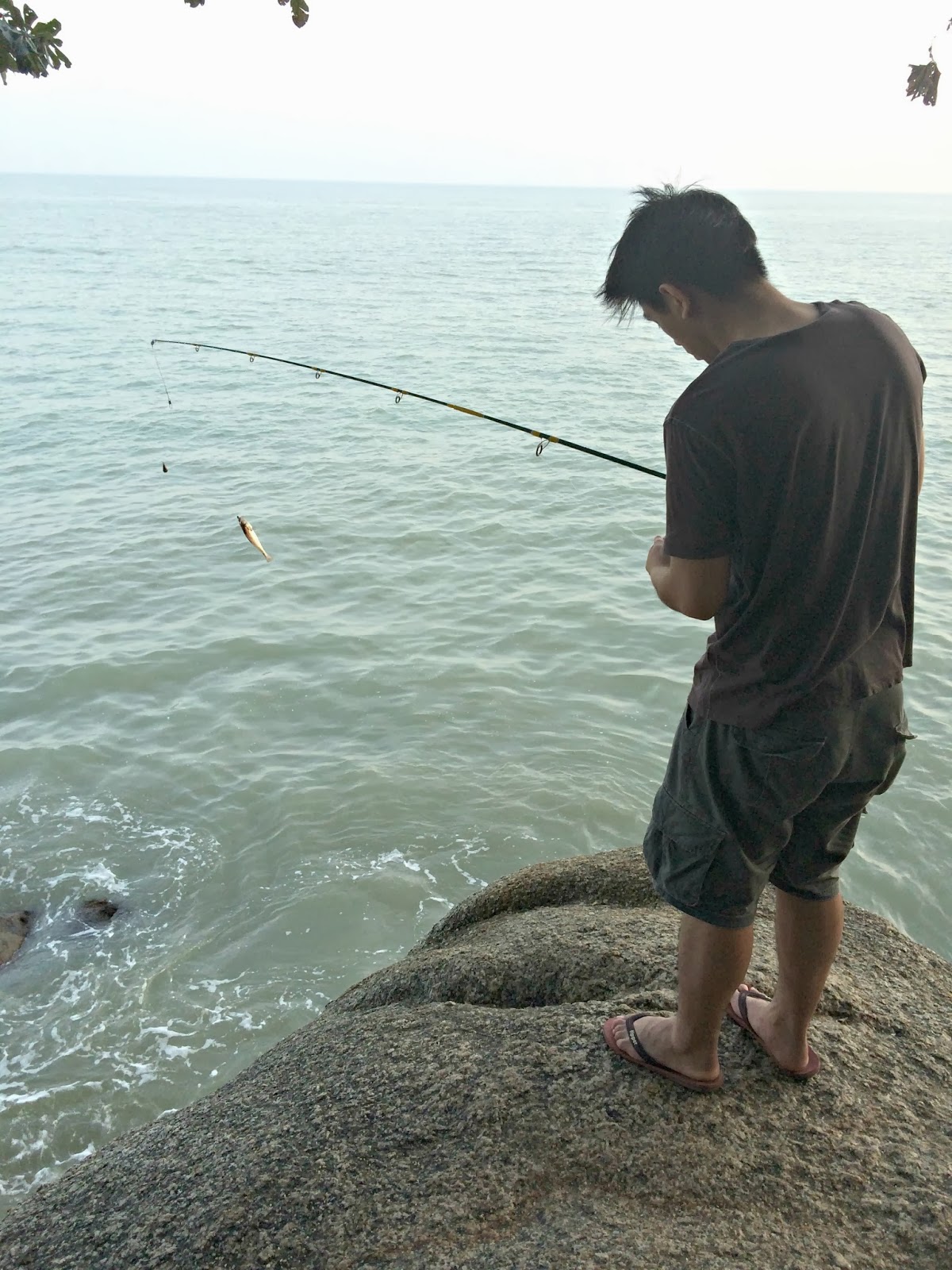 One of the things I really love about fishing is getting the hook off the fish. It can feel pretty cruel but then again, people say fish don't feel pain eh. So yeah. Top left is the bait sardine. Then the right one is another one that I just caught :) 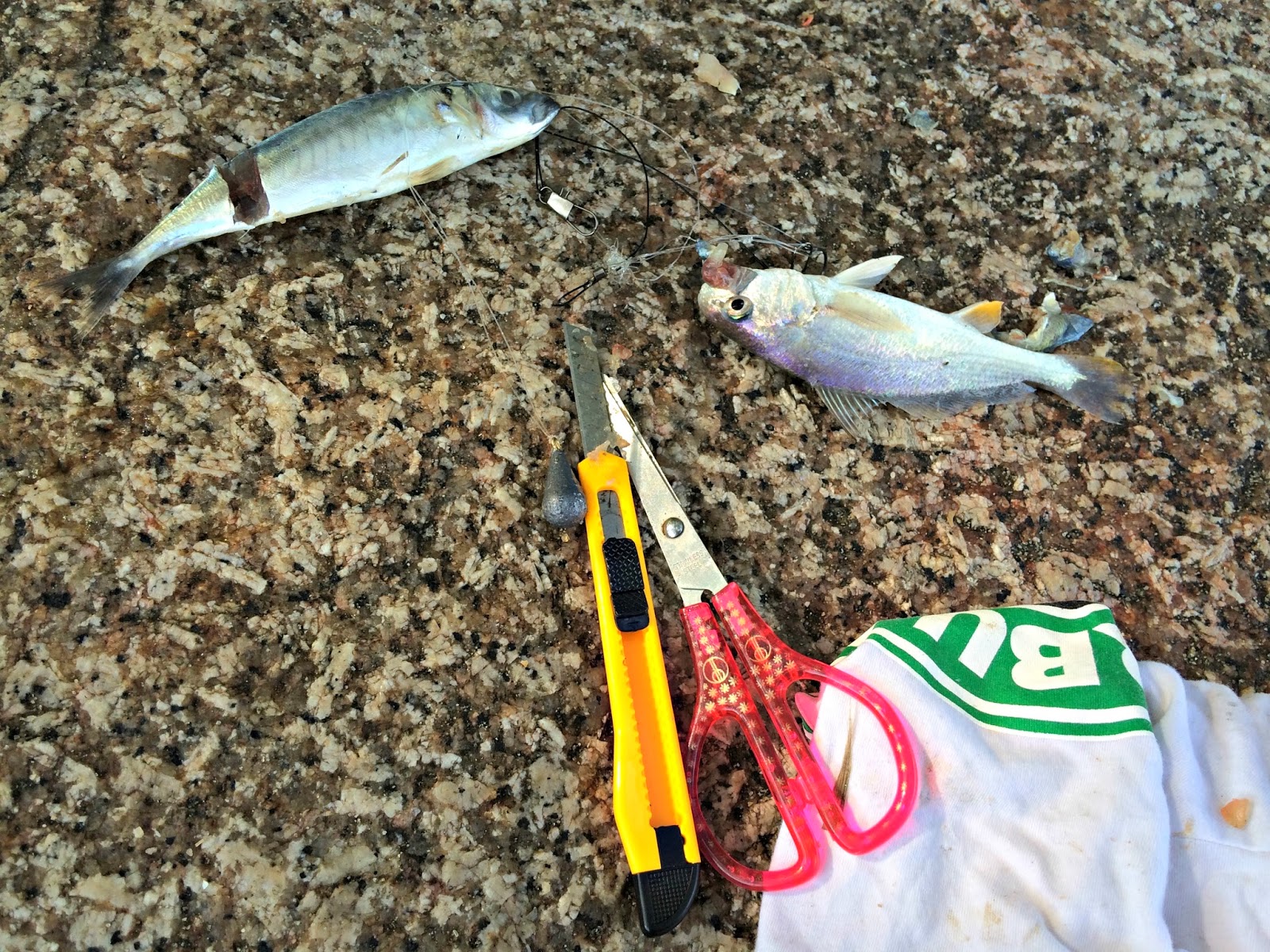 Total catch of the day: 13! We both caught one really big one each. He let go of his biggest catch because he didn't want to unhook it so he left the hook inside the fish. It's a poisonous one that's why. At least that's what he said la. Mine leh, when I got it, I was so happy, literally cheering loud and then the fish just slipped away while hanging on the rod that I was holding. I should have immediately put it down and get it into the bag. SHOULD HAVE! Gahhh. Nevermind, 13 is still very good. I caught most of it! *proud*  Oh! Did I mention that he killed two black huge round bees becuase they were invading our romantic fishing getaway! Haha. He was just too scared of them la so best way is to face them and kill! Hahaha. 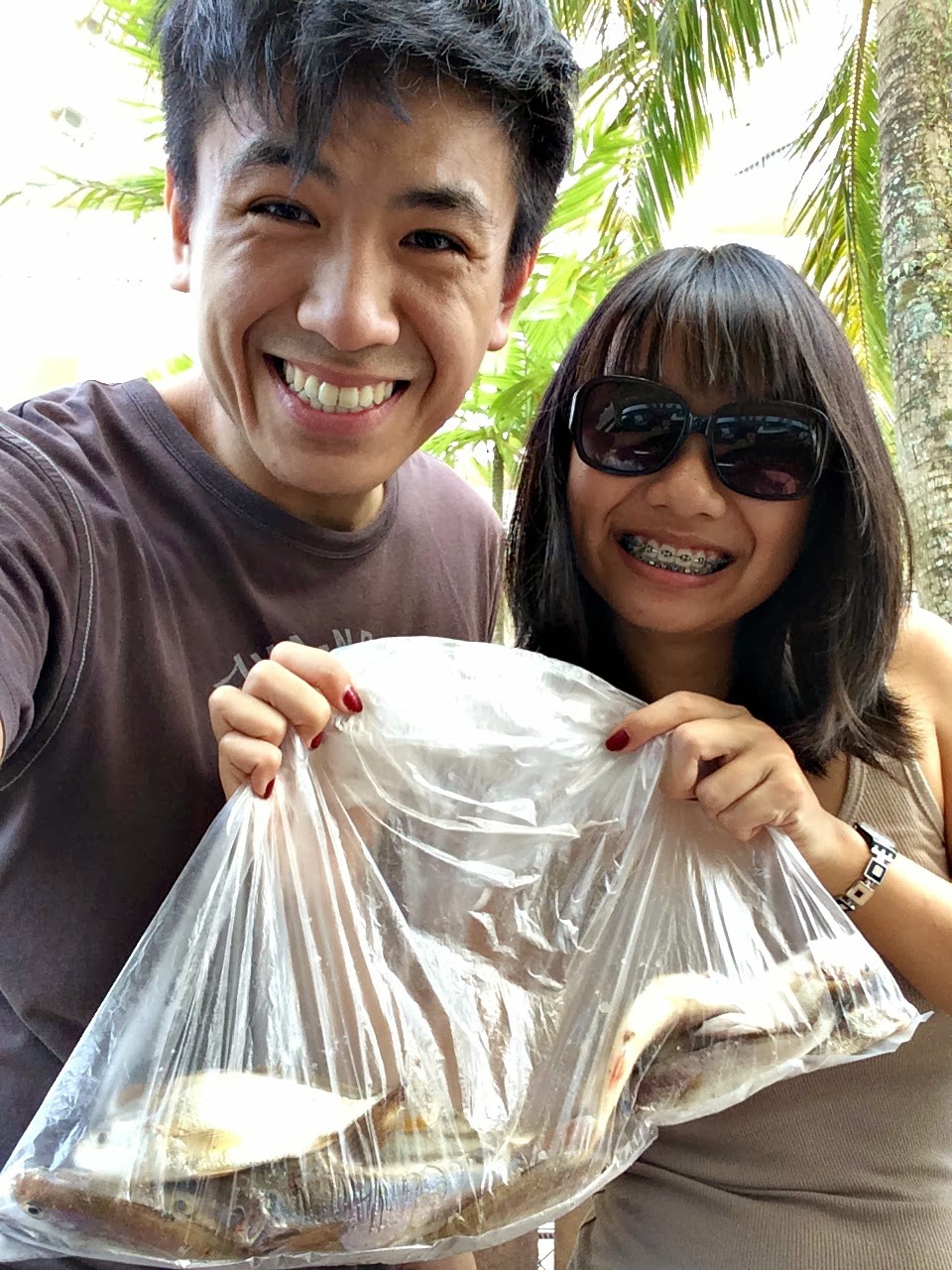 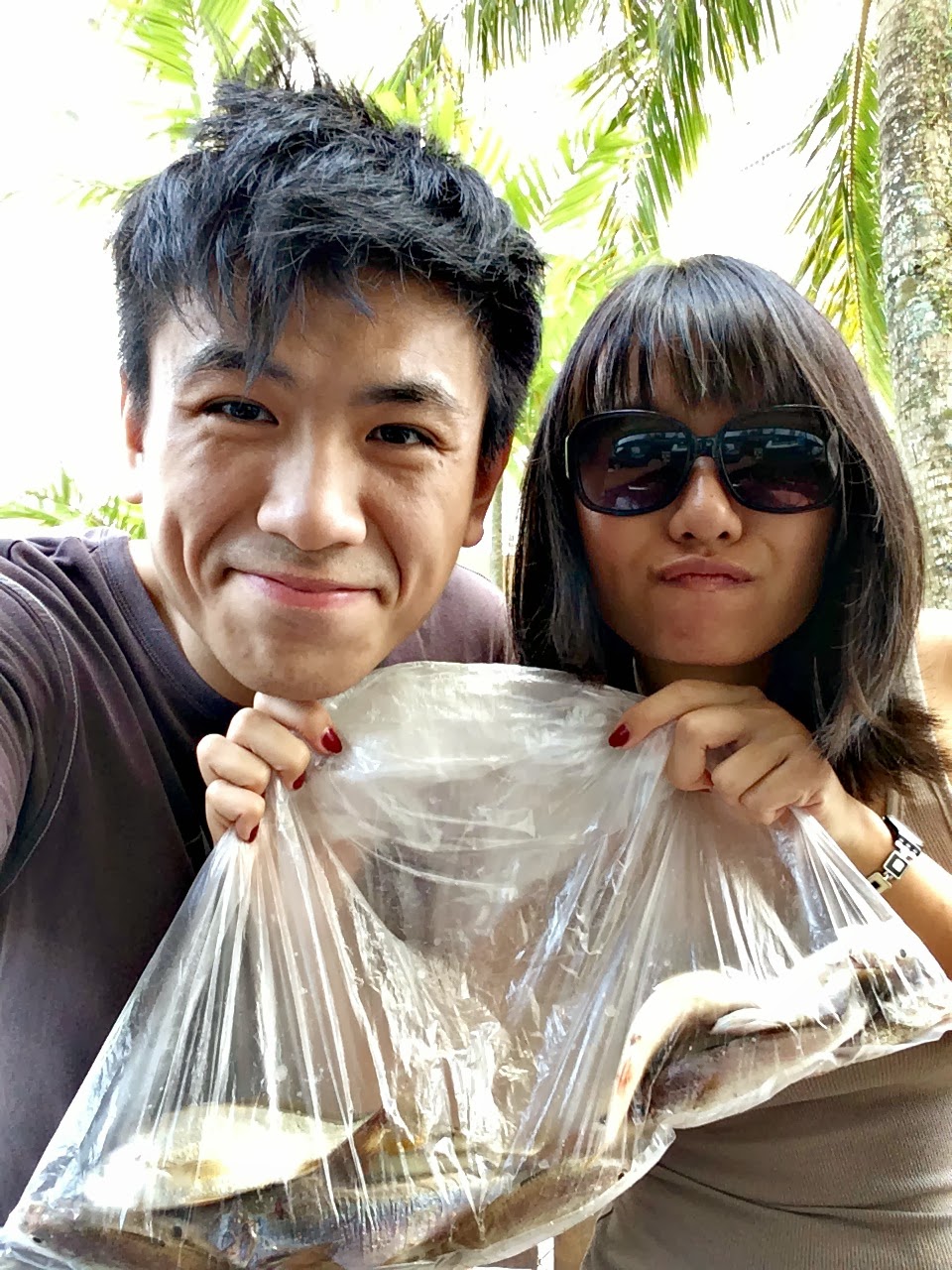 Thanks babe for the amazing start of the day. I love fishing now. Super love! 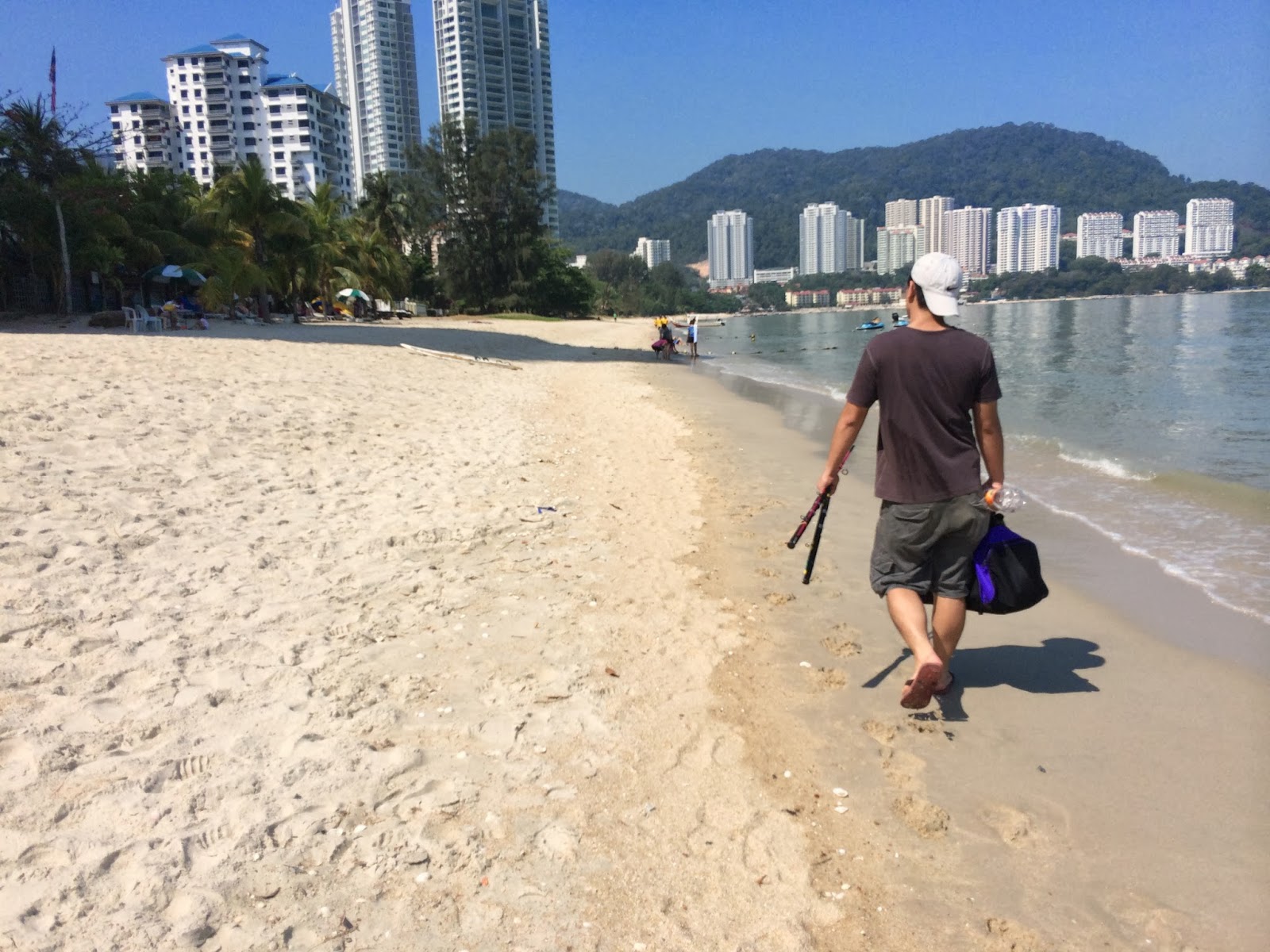 After fishing, we drove back home to get nice clean shower. Then, we went to Gurney for my birthday lunch. One thing I love about today is that he has everything planned out already. So, when I suggest something else, he's like, "Excuse me miss. Please follow the itinerary that I made."

It was so funny. We went to Nandos, because he just need to follow the footstep of Adnandos. The footballer who went to Nandos for his first date despite of the millions that he's making in playing football. So yeah. I love Nandos so no problem for me :) After lunch, we bought yee sang from Sakae Sushi and headed home. It was such a torture to drive home. We were both trying our best to keep our eyes open. SO DIFFICULT! We were so sleepy. So so sleepy. The moment we got home, we washed our feet and that's it. I wanted to help my mom with steamboat preparation but no, can't do. TOOO TIRED. It must be because I only sleep for 2-3 hours the night before.

When my mom woke us up in the evening, it was time for our CNY reunion dinner/birthday dinner. Two in one bestnya! 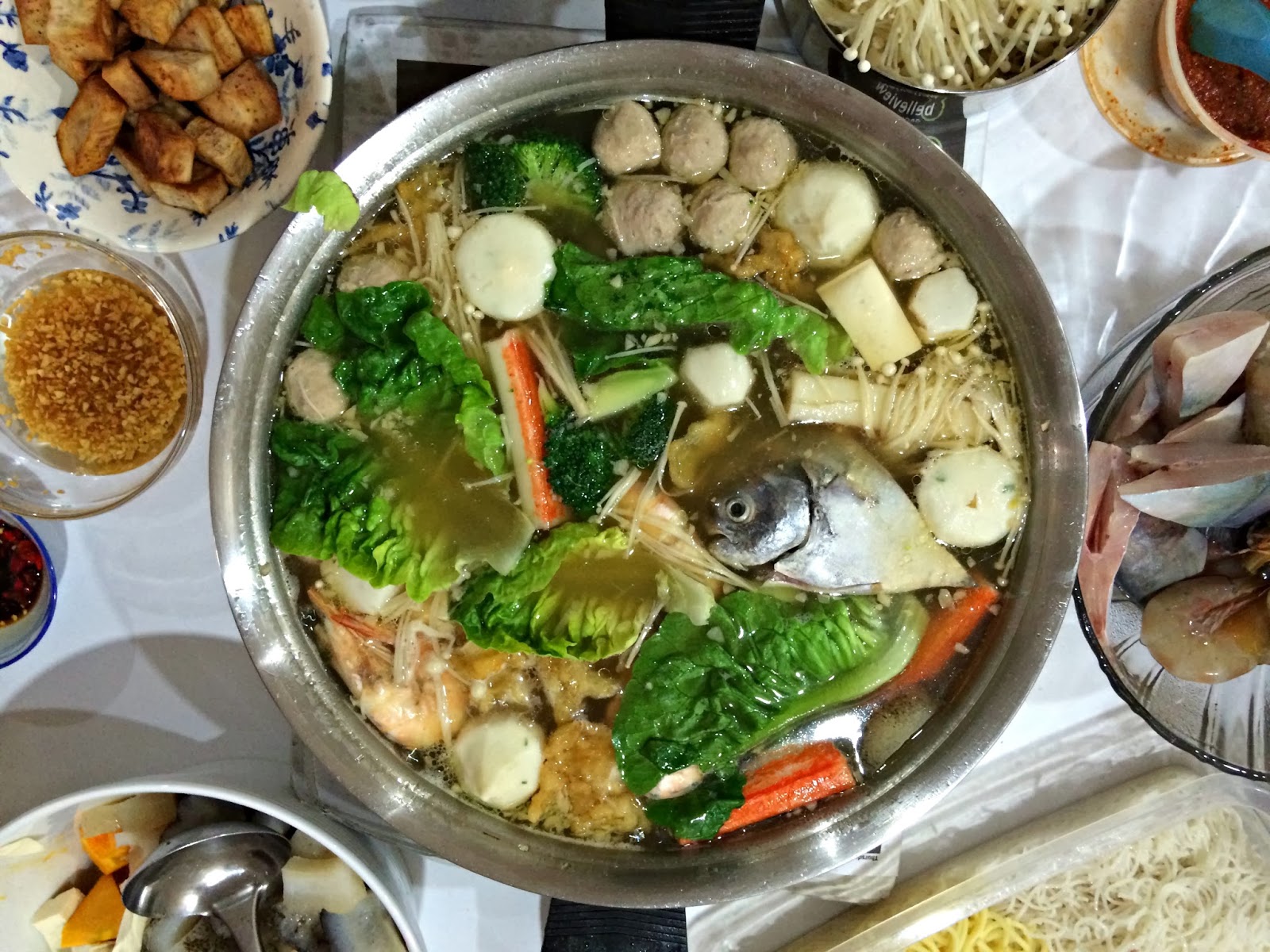 Lots of photos me and people coming up. I have to take photos with mom's cake of course. IT'S THE BEST CHEESECAKE I'VE EVER TASTED! Not being bias at all! Have you guys even tasted the cheese tarts that she makes? Boy, you are all missing outt! Order through me! For sure you will love it! 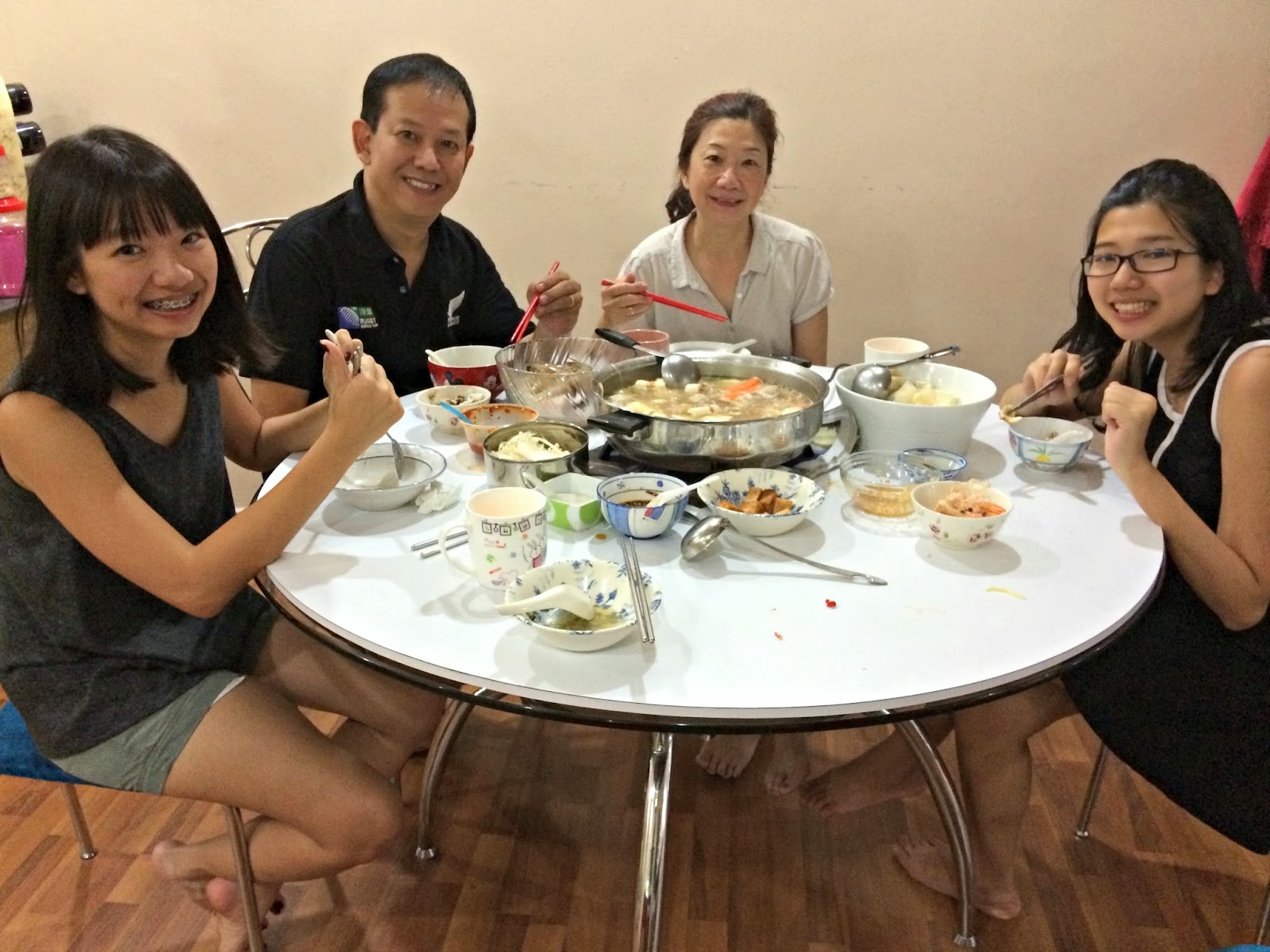 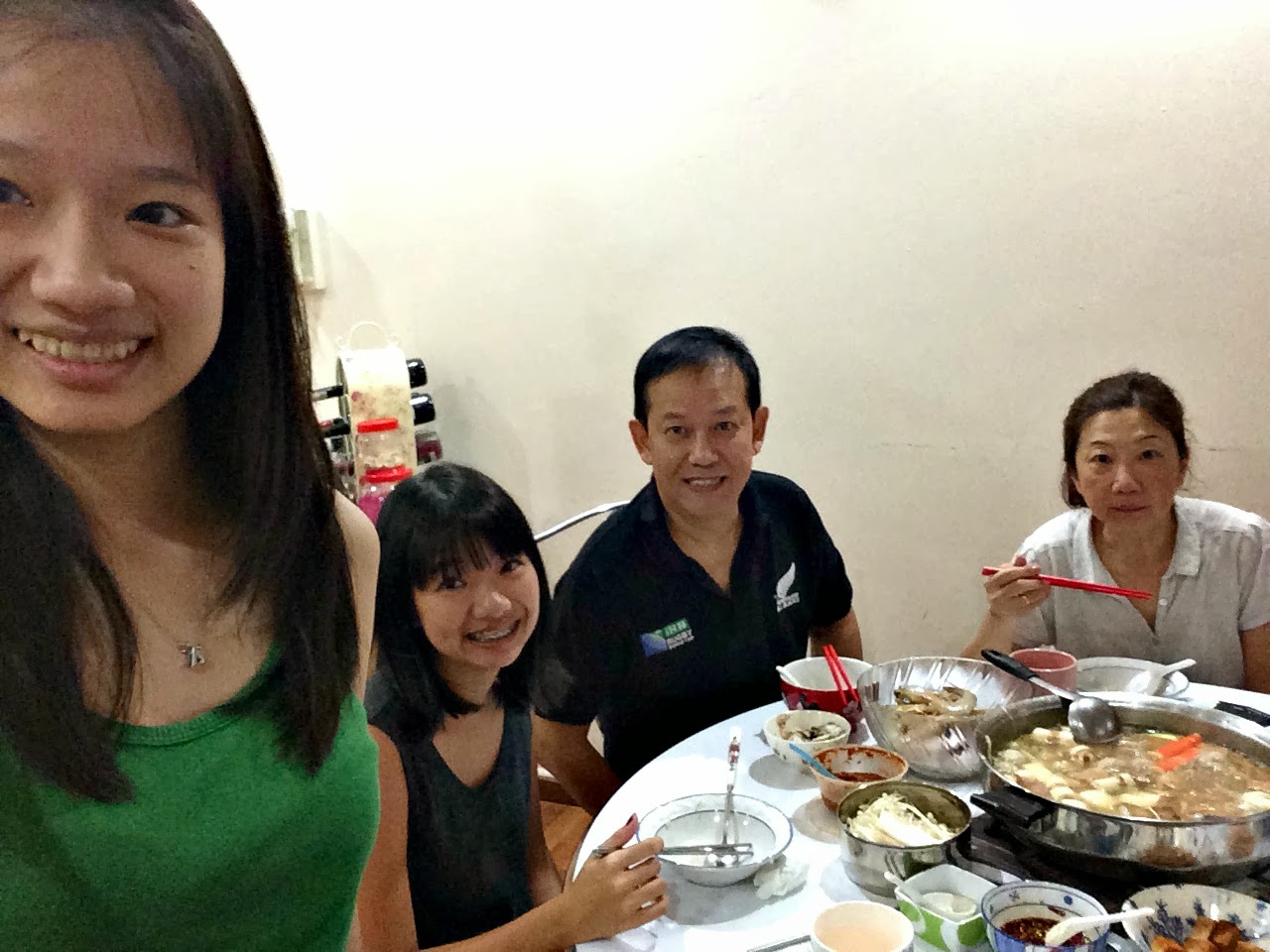 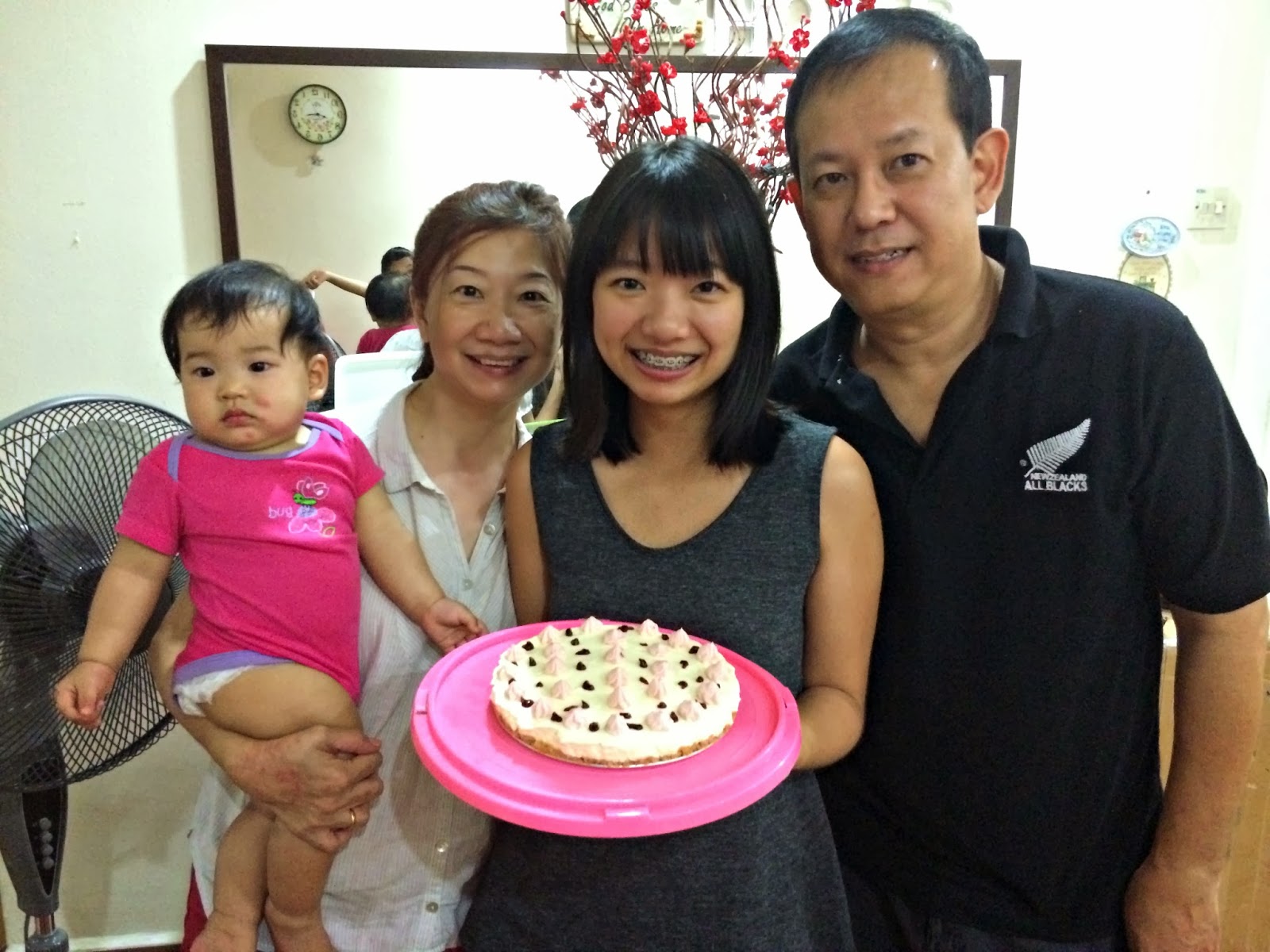 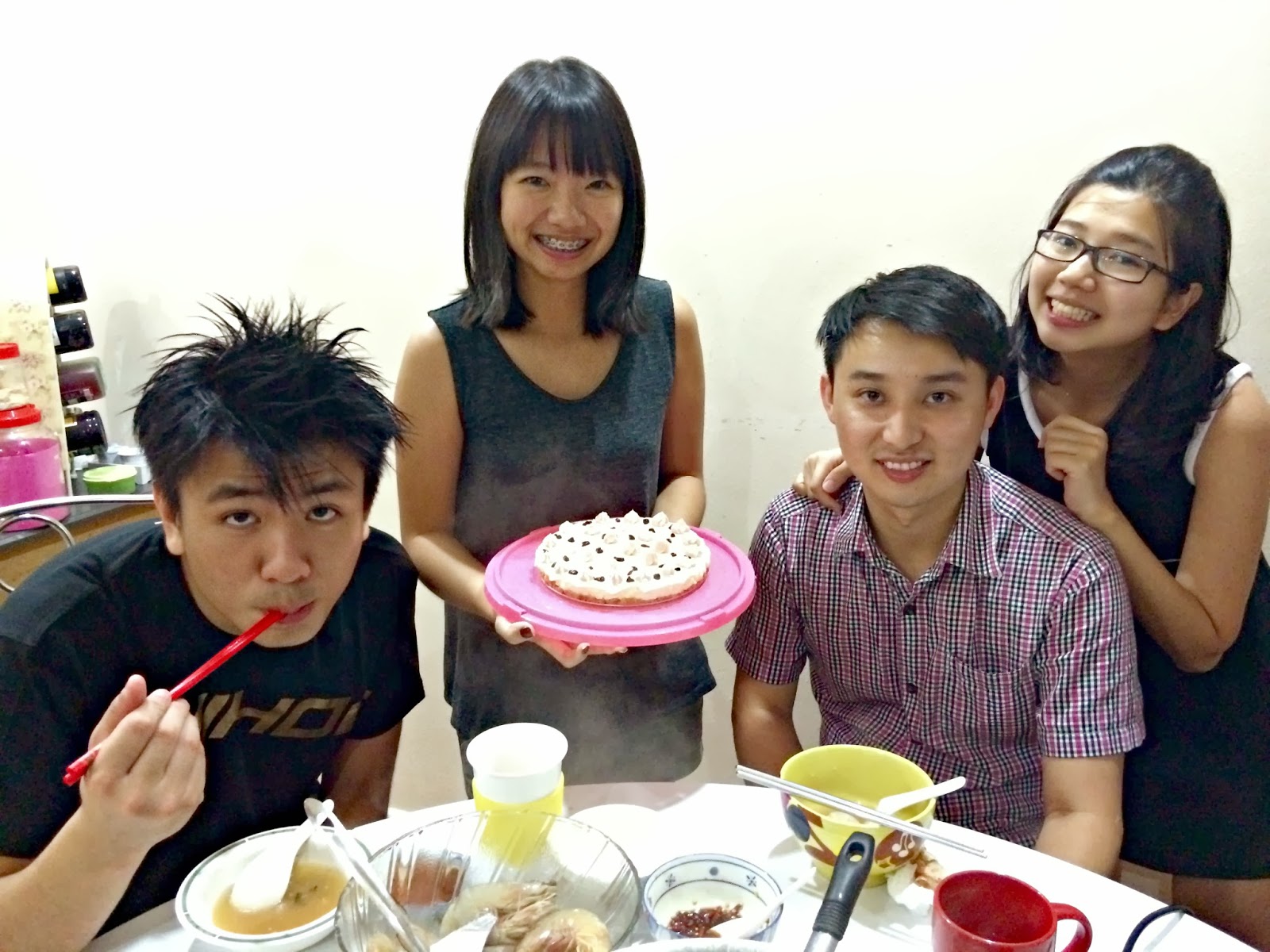 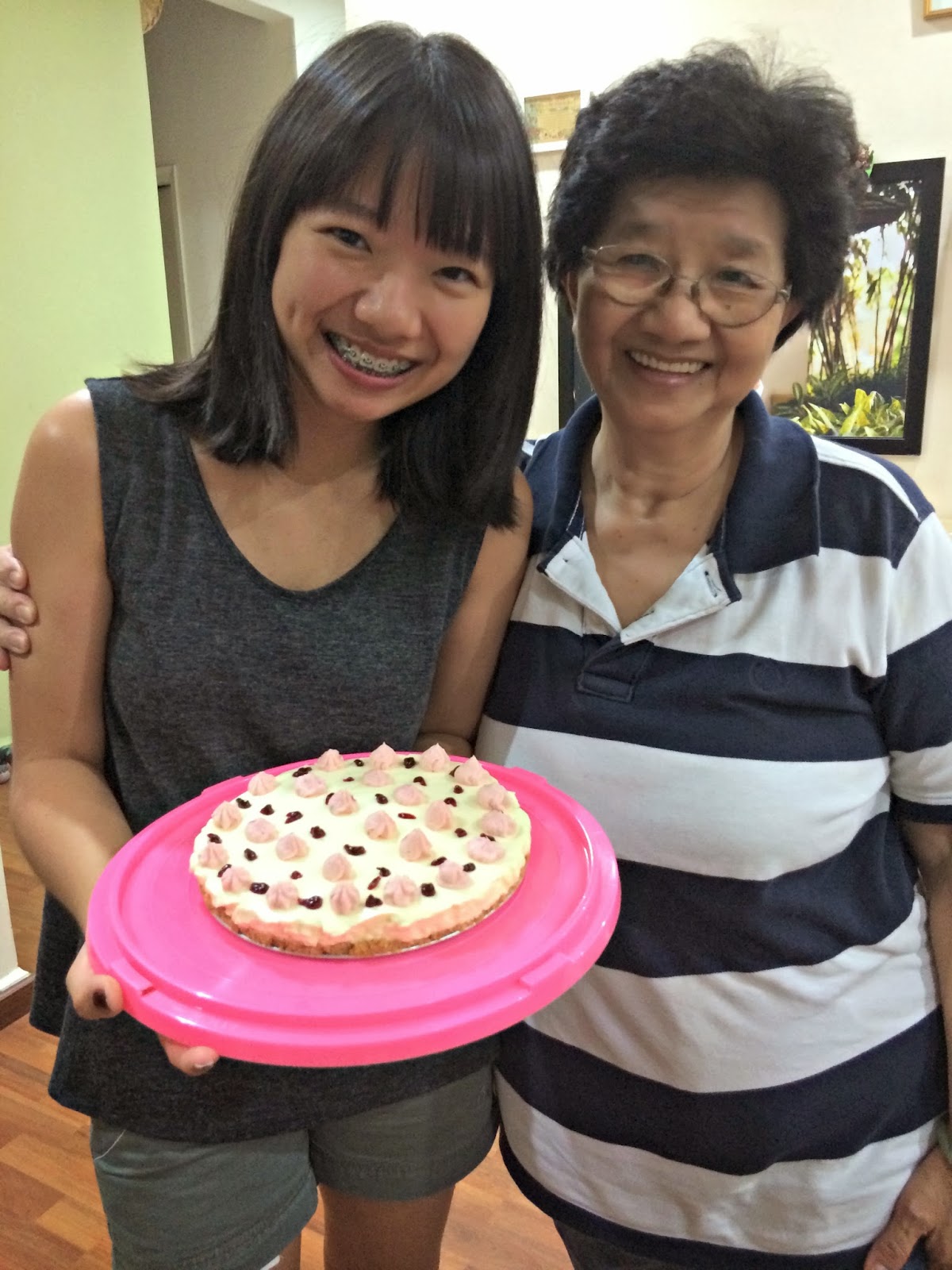 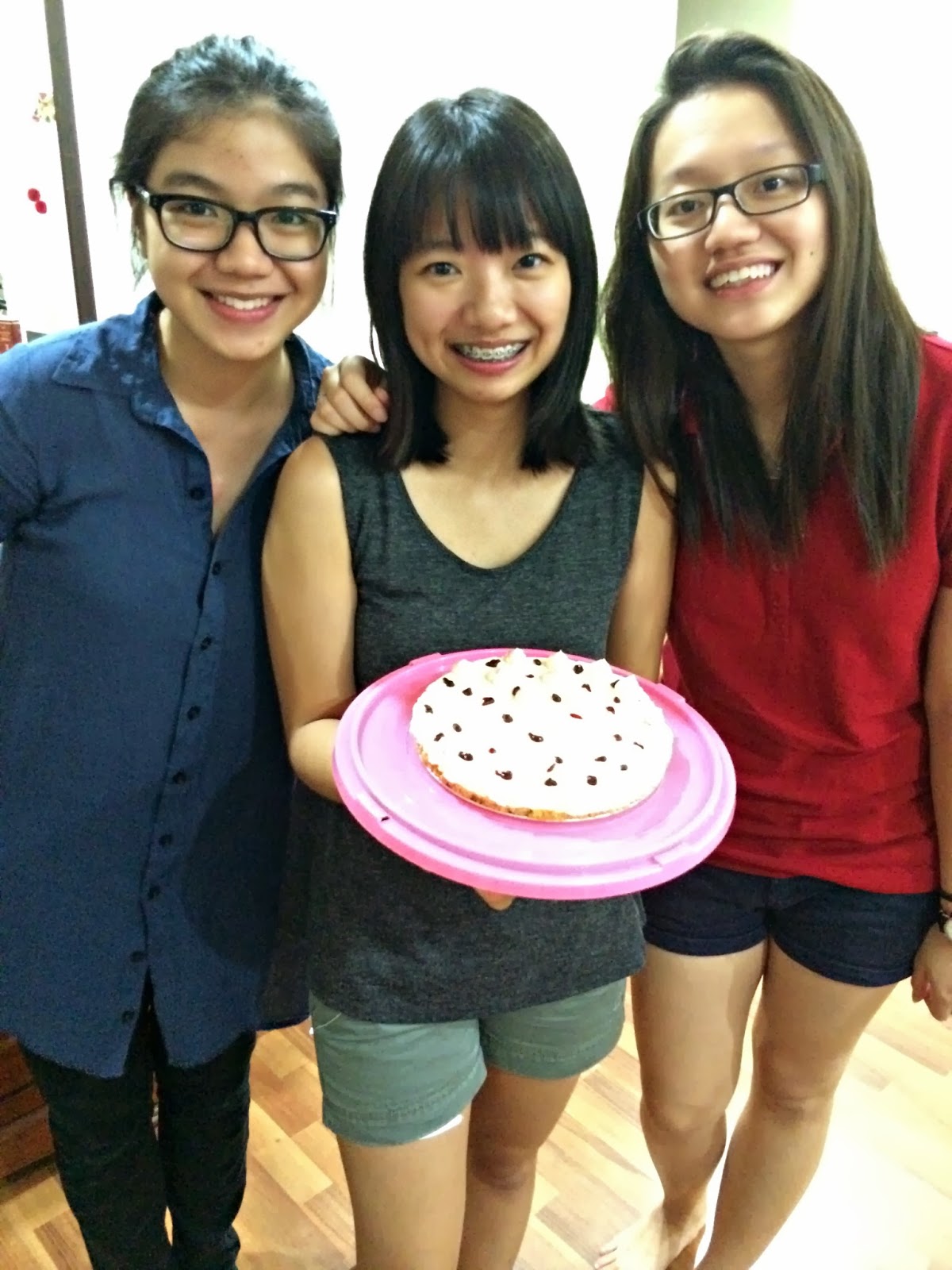 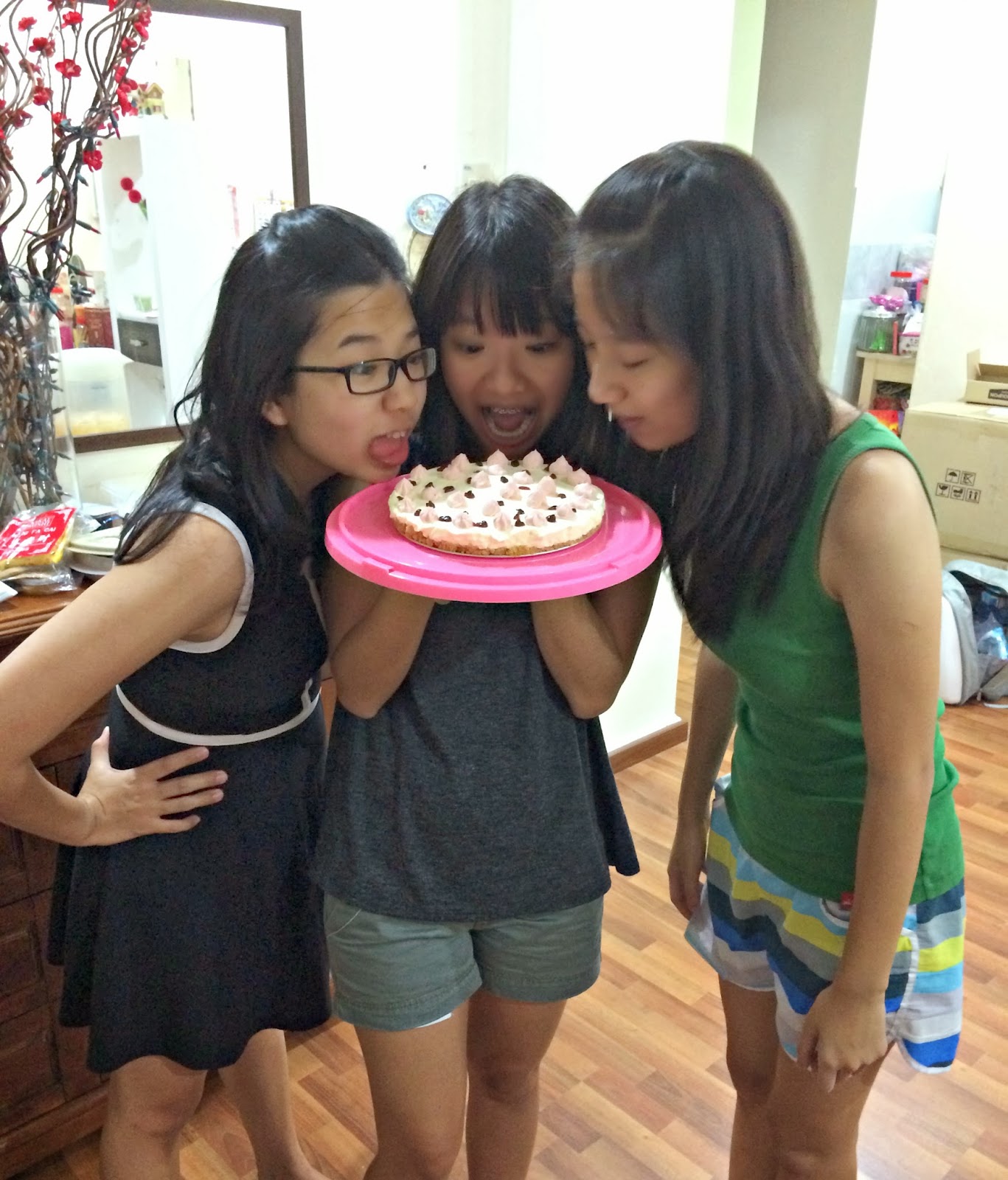 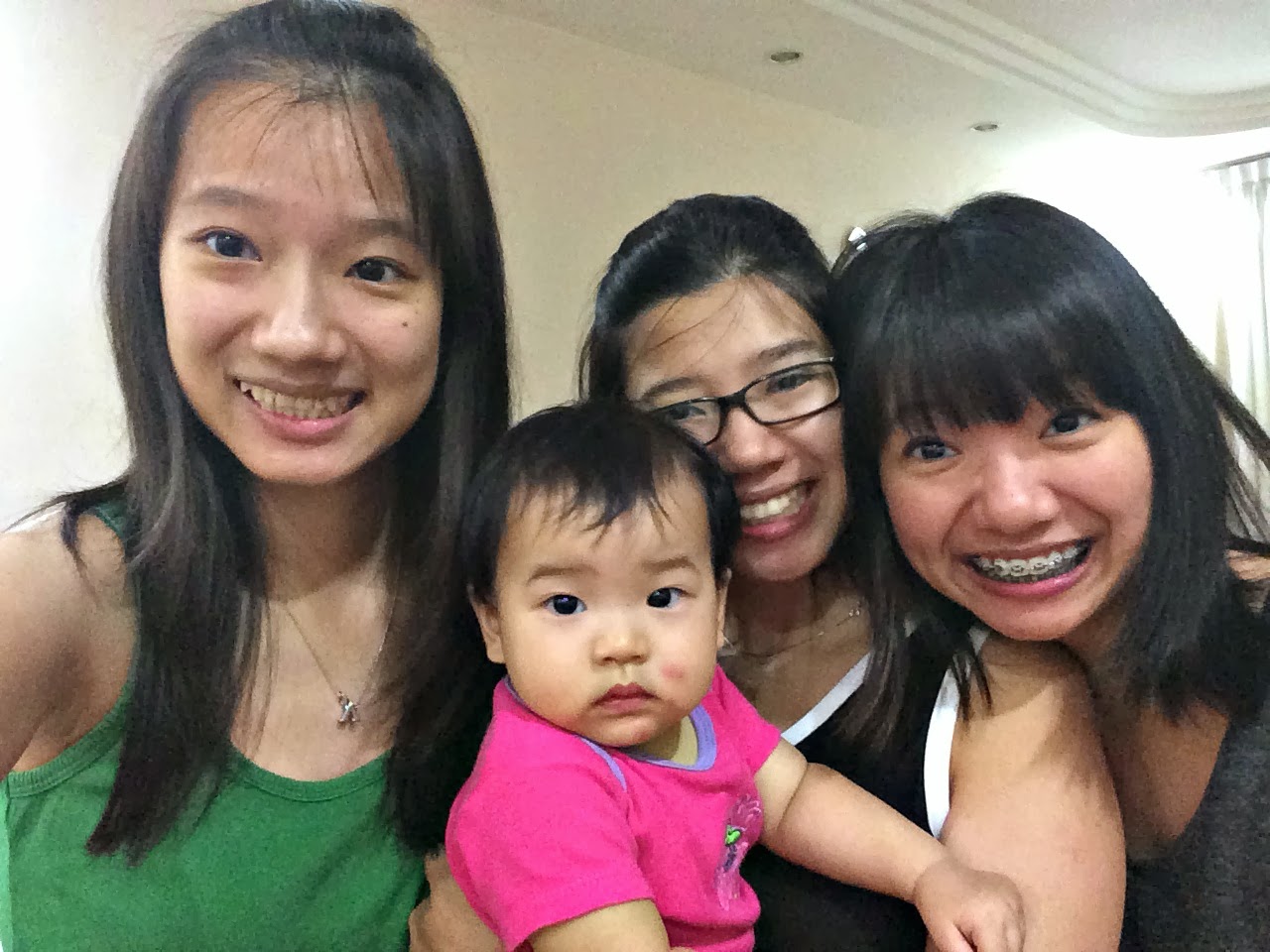 We ended the night with this. So I thought.. 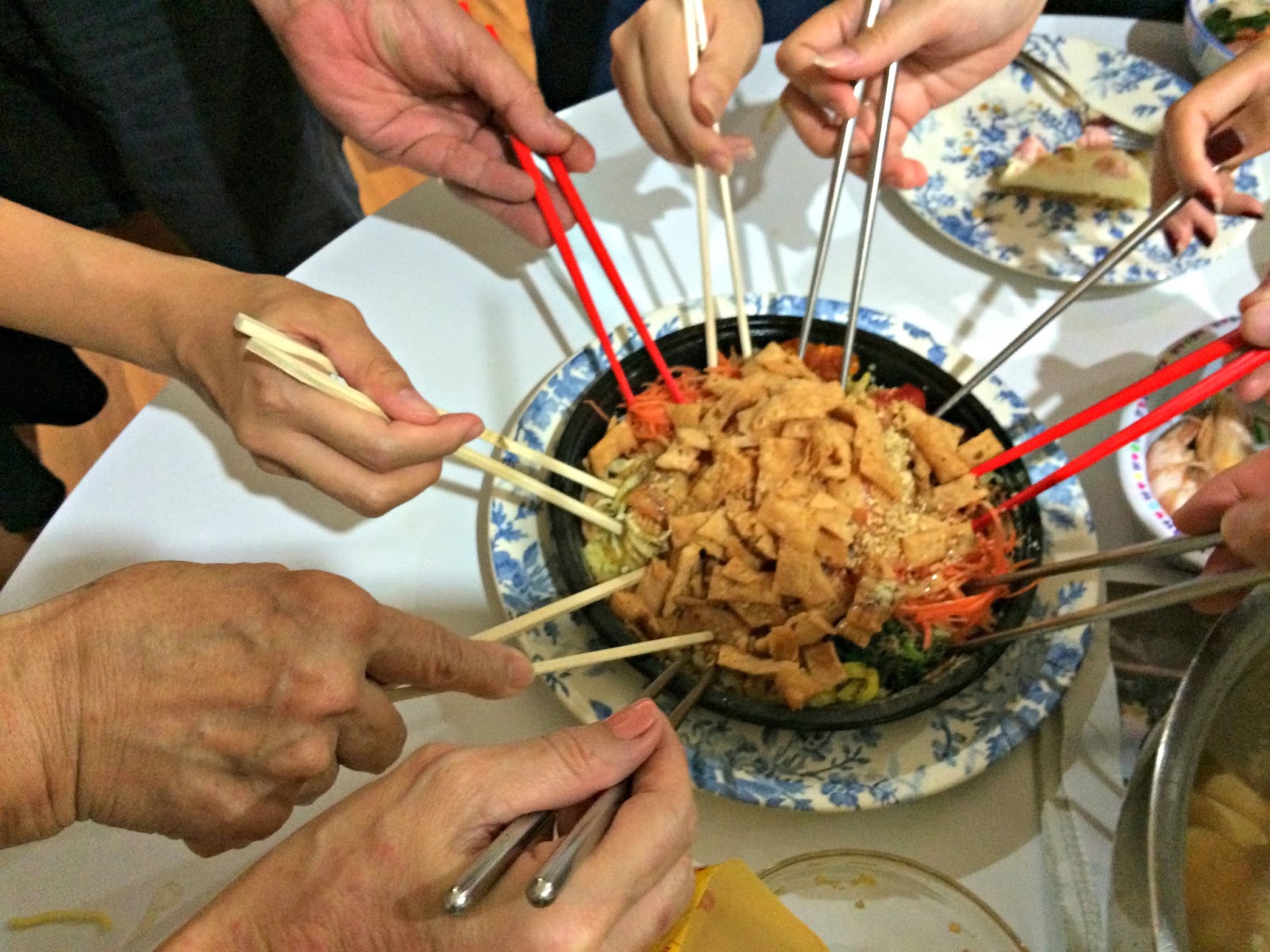 I was feeling pretty tired and my sister convinced me to go bathe. So I did. I also changed to my pajamas, and be at my most comfortable state.

They came in singing the birthday song.

TOTALLY NEVER EXPECTED IT! Earlier, I asked Koay if got surprises all because I wanna wear pajamas and all. He confidently said, "Of course don't have! You check my msg and see!"

So I believed him and nothing seem suspicious at all ma. I thought I'm quite good at revealing surprises all. Apparently not good enough. Haha.

Fun Fact 03: I only wear pajamas to sleep on special occasions. 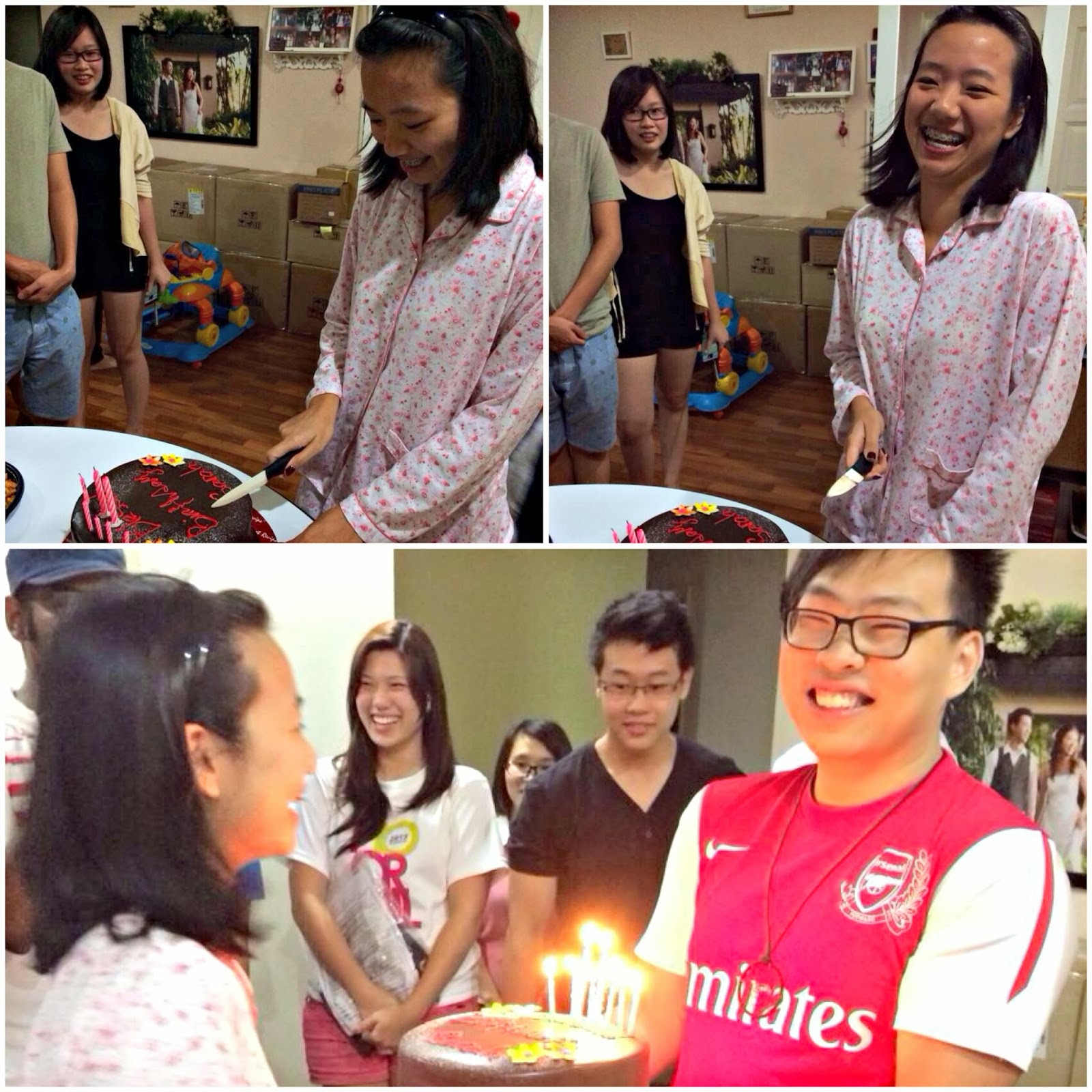 Thanks guys for coming! Love you all :) 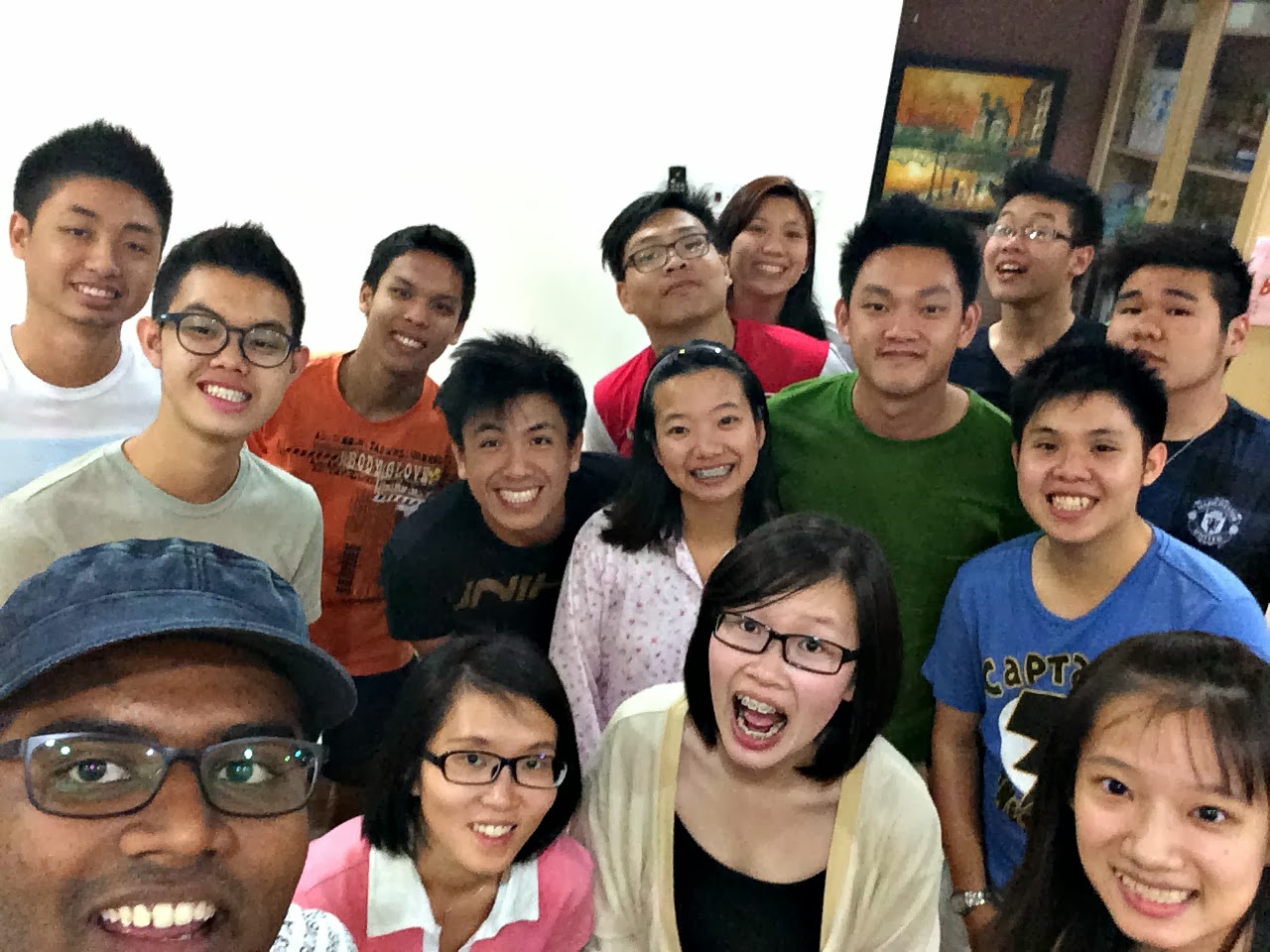 Also, thank you all to those who wished me in Facebook, Twitter, Instagram, text messages and whatsapp! Thank you so much! You all made the day even better. Turning twenty six isn't as bad/miserable as I thought it would be. I hope I can say the same when three zero hits me.

Special thanks to Andrew for my second's Manchester United's jersey, Leroy and Eulene for the comfy blue sweater, and lastly, Adrian Koay for my first fishing rod! :)

It was a great 10th February!

"10 February 1988 is
both your happiest/proudest moment of life
because the best thing that ever happens in your life happened!"

So I told my parents last night.