I said FIRST and not NEW because for sure in the future when he can afford, he will get Audi for himself or Honda for me. Haha.

It took quite some time for him to finally get his car because of all the additional things that he wants to have. Actually, the decision to get the car itself took quite long. Afterall, this is his most expensive buy to date. So, must take longer time to think. Next time buy house don't know what to take how many years d. Hah kidding kidding.

Old car never go, new car susah mau come. Haha. It was quite a sad farewell to this car. Not for me because he hardly uses this car when we go out, don't know why. For him and his family, it was such a tiny bit sad thing to do. I think for Jaryn it's a lot sadder. She drives this car everywhere when she was in Penang.

Oh well, time to get a bigger car since the family is expanding :)

The man told us he will reach in 10 minutes. We waited for 20-30 minutes. Pfft. When he finally came with the white baby, all pfft gone. Both straight so happy till smiling from ear to ear. Don't know why I so happy also ah. As if it's my car like that. Hahaha.

Although he did tell me that one of the reason he got it in auto mode instead of manual is so that I can drive too. So sweet hor? But he meant it as in I drive and he relax in the car. My turn to be the driver. Hahaha. I'm pretty sure for the first 6 months, he sure don't dare let me drive his new baby. Scared later I'm the first person to scratch it. Heh.

Oh ya! One more reason why he took so long to get the car after all the paperwork is choosing the number plate. He was given three numbers and he has to arrange them according to preference in case somebody else got the number already. After doing that which took don't know how many days, the man told us all the numbers that he wanted no more. Take so long sumore lah. Hahaha. Then, he was given other set of numbers and finally chose one that I thought was pretty nice. My favorite number three times leh. 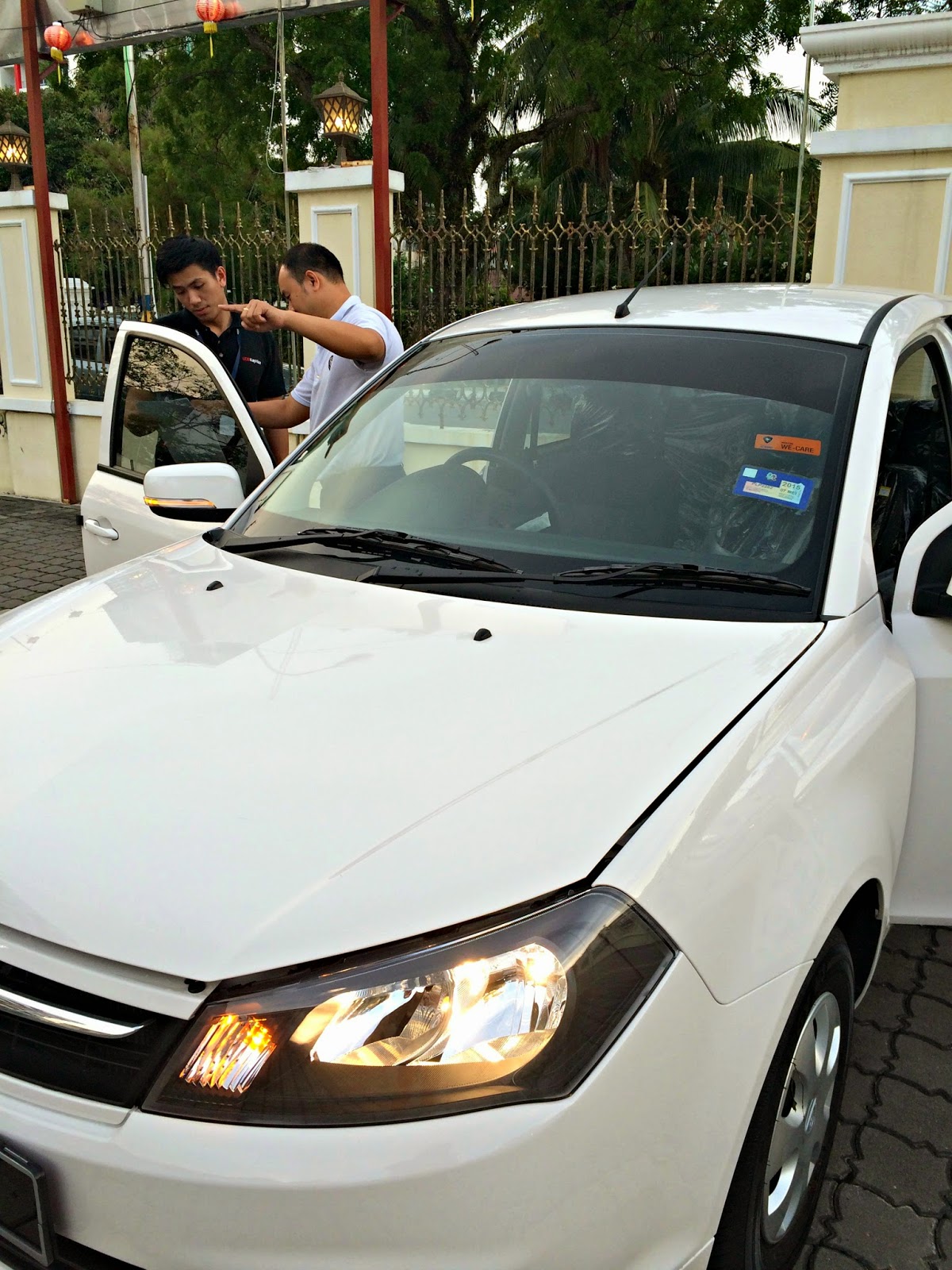 They went through everything that he needs to know of the car and I was just staring at the white beauty. He even sent the car to have some areas custom painted with white because although it's white, not all areas are in white. He wanted ALL white, so I think he paid extra to get that done.

After all the talking, we drove this car to dinner. Unknowingly, a bug followed me into the car after dinner.

Me: *hits the bug in darkness on my hand* Yerrrr. WHAT IS THATTT!!
Him: *looked at me with an eyebrow raised*
Me: Babe! SOMETHING IS ON ME! AND IT'S NOT MOSQUITO!
Him: Wei! Why you bring insect into my car!!?
Me: Ohhhhhh! New car d so action hor. Sayang this car more hor.
Him: *keeps quiet and steal some glances at me*
Me: Before the car, you would say something like this, "Babe, are you okay?" Now straight say I purposely bring it in. *claps hands*
Him: *smiles* Nolahhhh. Just testing you ni.
Me: Hahahaha. Don't test me ah later I show some 'love' to your car only you know *grins*

This is only day one.