For those of you who have absolutely no idea where I'm currently working at (shame on you!), I am with Holiday Tours & Travel. It has been 2 years plus with this company and so far, I'm loving it!

Our HQ is in KL and we have a few branches all across the Peninsular. Penang, Kuantan and Johor. We are also expanding to the East Malaysia very soon. We have a total of 300 staffs. Holiday Tours & Travel by far is the top travel agency in Malaysia (if I'm not wrong!).

One of the core services in this company is corporate travels and that's the department I'm in. That should be enough for a company's summary I hope.


The Penang team are divided into half and the first group flew to Johor in the afternoon and the rest of us at night. We took Airasia direct flight, AK 6415 and it only took us less than an hour to reach Johor.

We stayed at Doubletree by Hilton. LOVE THE ROOM! The food okay okay only. Nothing to shout about really.

By the time we got to the hotel, it was already midnight and after settling down in my room and changed into my PJ, we all went to another room and played monopoly deal. Heh. I went back to sleep halfway because the flu was getting worse and we got to wake up at 6am the next day for the teambuilding.

It was insane okay! Less than 4 hours to sleep and I was still feeling pretty weak.

Yes, I really did wake up at 6am. Surprisingly, I didn't sleep well despite taking the sleepy-flu-med. Hmm. I took a long nice hot shower and got ready for breakfast. Then, we all gathered together and headed to Legoland.

There, we took photos and did a lot of icebreaker games before we kick start our Lego Race (The Amazing Race style!). I was in the yellow team but apparently, the Manchester United singlet that Koay got from Phuket was more to green than yellow. So, basically I looked like the 'lost member' in the yellow team. Heh.

Our team consists of staffs from KL, Kuantan, Johor and Penang! So muhibah okay.

The man in blue on the first left is my Managing Director, Thomas. The coolest Director I have ever known. So humble and down to earth. Bestt!

We ran quite a lot in the beginning because so pumped up to finish first and stuff. Oh and it was so hot in Johor that it feels like it's two different sun compared to our sun here. Crazy okay!

I'm proud to say that I did all although I was very hesitant about the main roller coaster ride. I did it in the end lah since I wanted to have like perfect team score. Kiasu me.

All very determined to solve those questions. Some so difficult it's impossible to answer.

We stopped at 1pm for lunch and have free time till 3:30pm. There were 7 buses in total right. 6 of the buses were summoned to come earlier and send us all back to hotel earlier. Haha. So funny. No one wanted to stay any longer because it was so hot and we did most of the rides also anyways.

I love coming back to a nice-already-made-up-room. I rested a while before taking the longest and warmest shower. Oh goodness. If only they have the bathtub in the room, then it will be perfect already. If only I have the room all to myself, lagi perfect! Hah.

Anyways, I watched Revenge on the TV a while and fell asleep until about 5:30pm and literally had to drag myself out of the bed. Quickly doll up and met with the rest of them.

We went down to get our 'lucky dip prizes' and many of them get things like Jusco's RM50 vouchers, Philip's hair dryer, toaster and blender.

I was pretty excited at first then only realize that there is absolutely no point in it because I'm not going to spend RM500 (good promotion time!) or up to RM1,000 fly to Hong Kong just to stay at this hotel for free right? Besides, I already have so many travel plans for the first half of the year and this is valid till 30 June 2015 only.

So yeah. Trying to sell it off to my colleagues if anyone happens to want to go Hong Kong. Too bad I can only sell/give to HTT staffs only. Part of the terms and conditions. Boohoo.

So, while waiting to be seated, we hung around, take lots of photos, talk to people and make new friends. We definitely took a lot of photos outside. Sales team lah, 4th floor team lah, Contiki gang lah (people who are below 35 years old!) etc. The list is never ending!

Some of the Contiki Gang :) 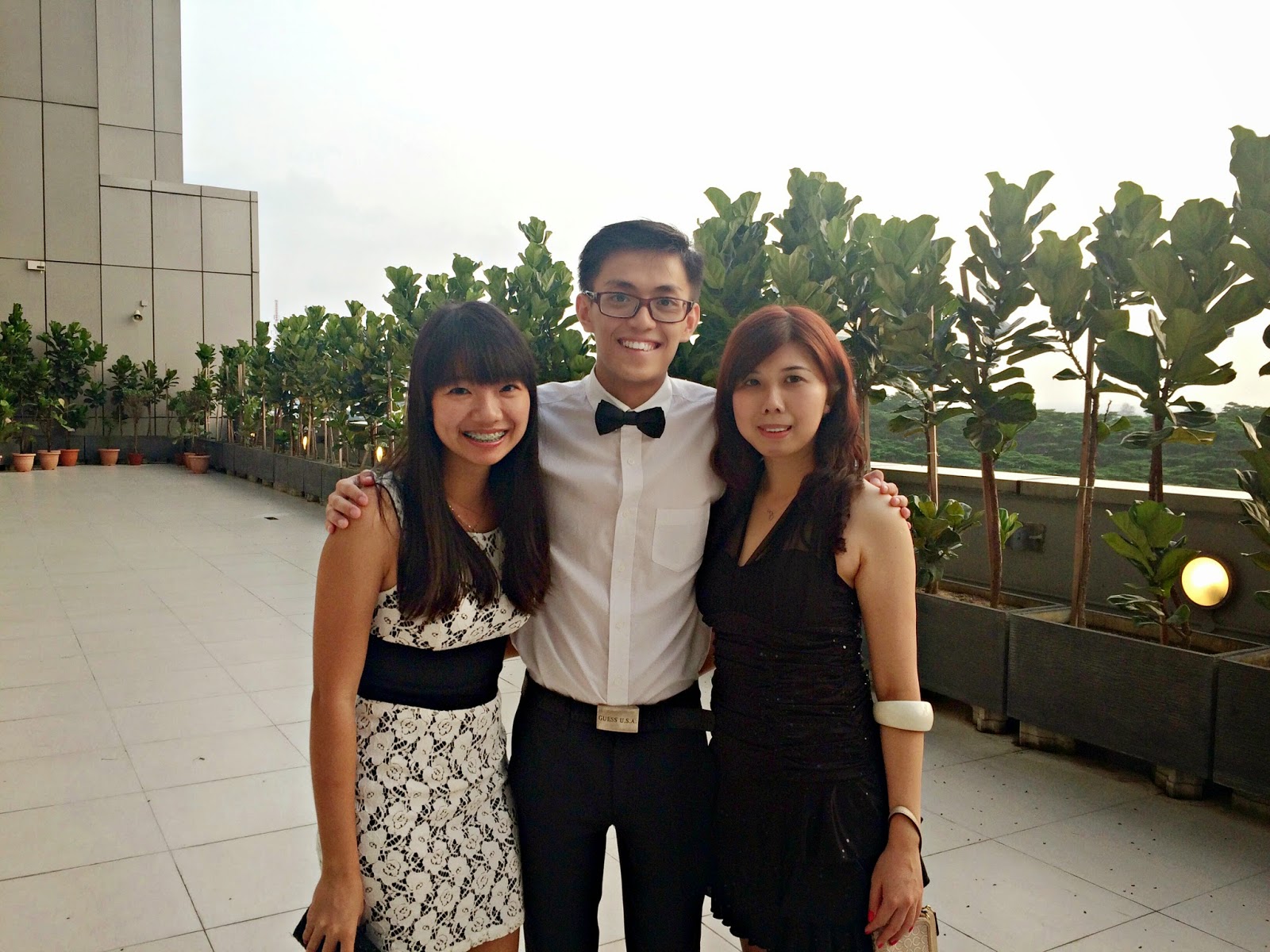 One thing about the night though is that it's buffet style so hmm.. Never really like buffet style kind of dinner, especially when it's so formal and everyone is so dressed up.

The rest of the night, we sat down and enjoyed some of the performances. The emcee I thought was really funny. I can't remember his name. We participated in a 'game' where the whole table must stand on the chair and dance. Malu but memorable night it was.

After the night was done, we stayed back and continue dancing to the music in front of the stage with the rest of the young people of HTT. Our MD still partying outside the hall with some of the guests. It was such a fun night.

I skipped breakfast needless to say because first, the food isn't that great and second, we all slept at don't know what time. By the time I woke up, I only had less than an hour to do everything for check-out already.

We went to Johor Premium Outlet before heading to the airport. My flight departs at 3:20pm with AK 6418 so I had so little time to walk around and actually buy things. EVERYTHING IN JPO WAS ON SALE!

Since I couldn't really decide whether I was going to spend money there and then, might as well spend more time have a good lunch.

I SHOULD HAVE GONE TO THE SWATCH SHOP! My colleagues told me on Monday that they got a total of 16 WATCHES! SIXTEEN!! Because it was super cheap after the discounts!

I wanna cry okay. I'm the biggest fan of Swatch. I never wear other brands one okay. The one that I'm wearing costs me about RM300 and they only got it for less than RM100! MADNESS.

Then, PEN-JHB with Airasia got promo. Return trip only RM58! I told Koay we should do a one day trip down just to shop at JPO. No kidding! Cheaper than bus ticket to KL. I told him G2000 that time also on crazy promotion and it's super true. Ahhh.

If I have a choice, I will always prefer to travel with an international airlines like Malaysia Airlines, Singapore Airlines and others. I don't really like low cost carriers. Cheap yes but super uncomfortable. Actually, Airasia also not that cheap anymore. Sometimes, MAS' rates are much cheaper.

But I'm not complaining. It's all good :)

Thankful for every opportunity that I get to travel :)
By Sarah Khoo
Labels: Travels, Work
Newer Post Older Post Home