One Day Drive to KL.

First time, we had to force ourselves to sleep at 9pm! Literally. I was so tempted to continue watching my PLL but couldn't because we need to drive ma. And I needed to sleep early also because I thought we would take turns to drive. In the end also he drove all the way to and fro. *thumbs up*

So, I got up at 4am, feeling so awake and strong and then we hit the road at about 430am. Not long after that, I was snoozing away d untill he woke me up to take a picture of the clouds. Go see my instagram and you'll see what happened there. Hah.

We of course stopped at Ipoh for breakfast and this time, we didn't want to just have the typical dim sum so we headed to the ever famous beef noodles. Yes, we used Waze and Waze needs to be awarded as best app ever invented to mankind :) No pictures of the food here cos we are gonna be posting them at our food blog.

Then, when the sun was up and it was bright enough and also because I shouldn't sleep anymore (cos it makes him sleepy seeing me sleep), we decided to cho siau, with the GPS holder. I even secretly change the mode to video so he wouldn't realize and I can film all his nonsense-out-of-tune-singing-and-dancing. And the start of the video, I just looked into the camera and smiled like for 40 seconds or so, to make him think I was posing for the camera. It doesn't sound funny here but we definitely had lots of laughter going on in the car that time. What a weird couple we make, really. 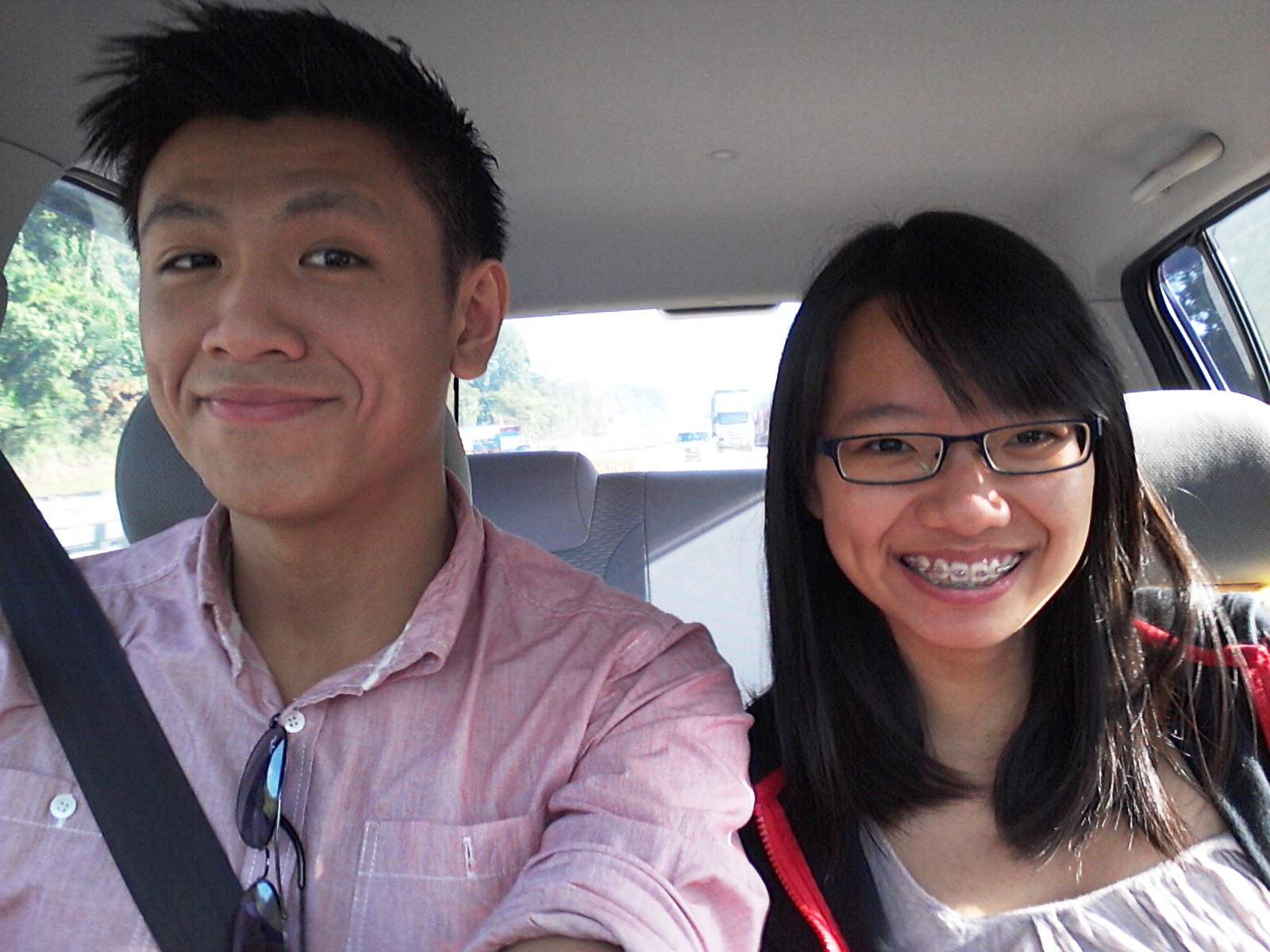 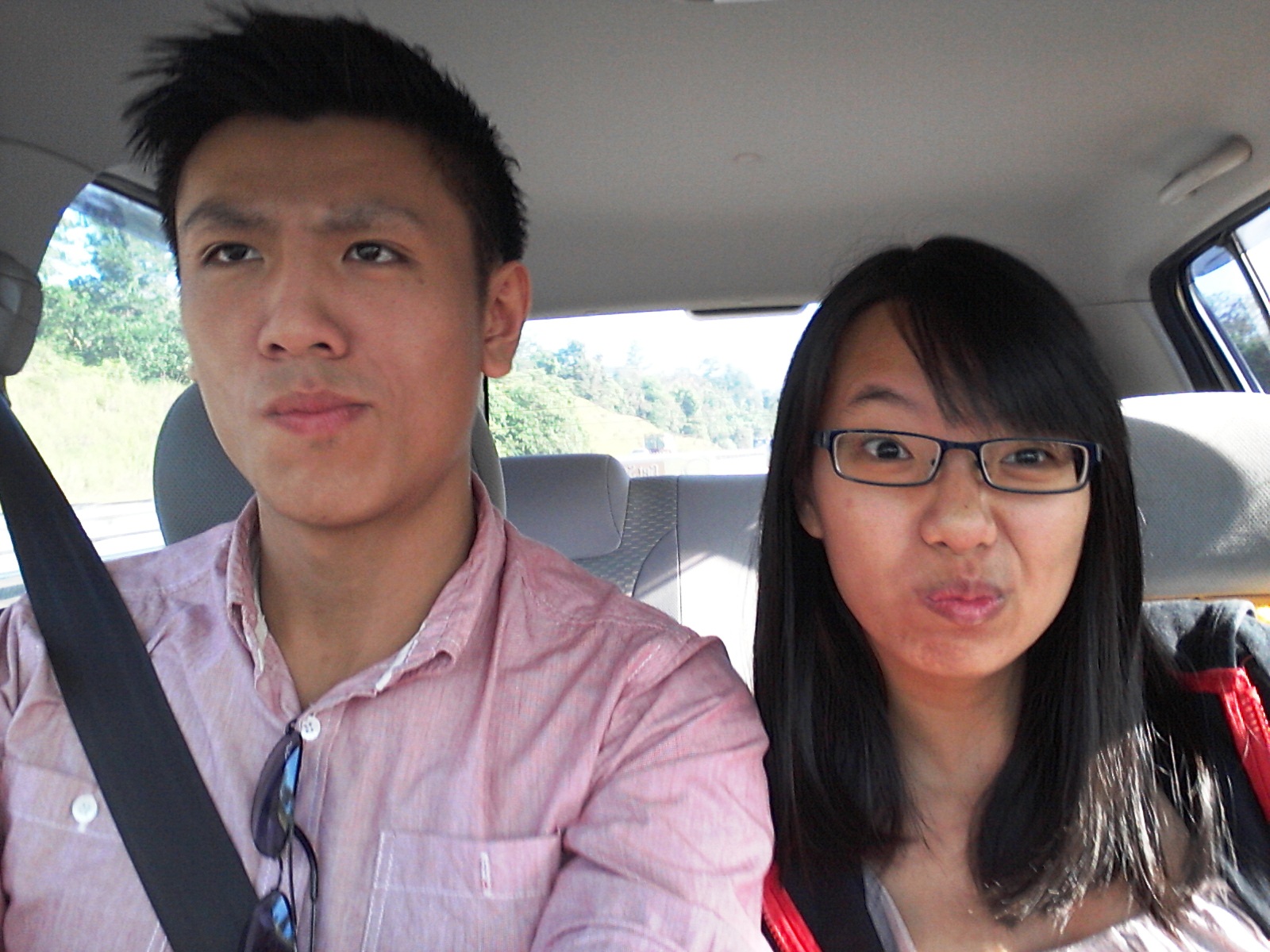 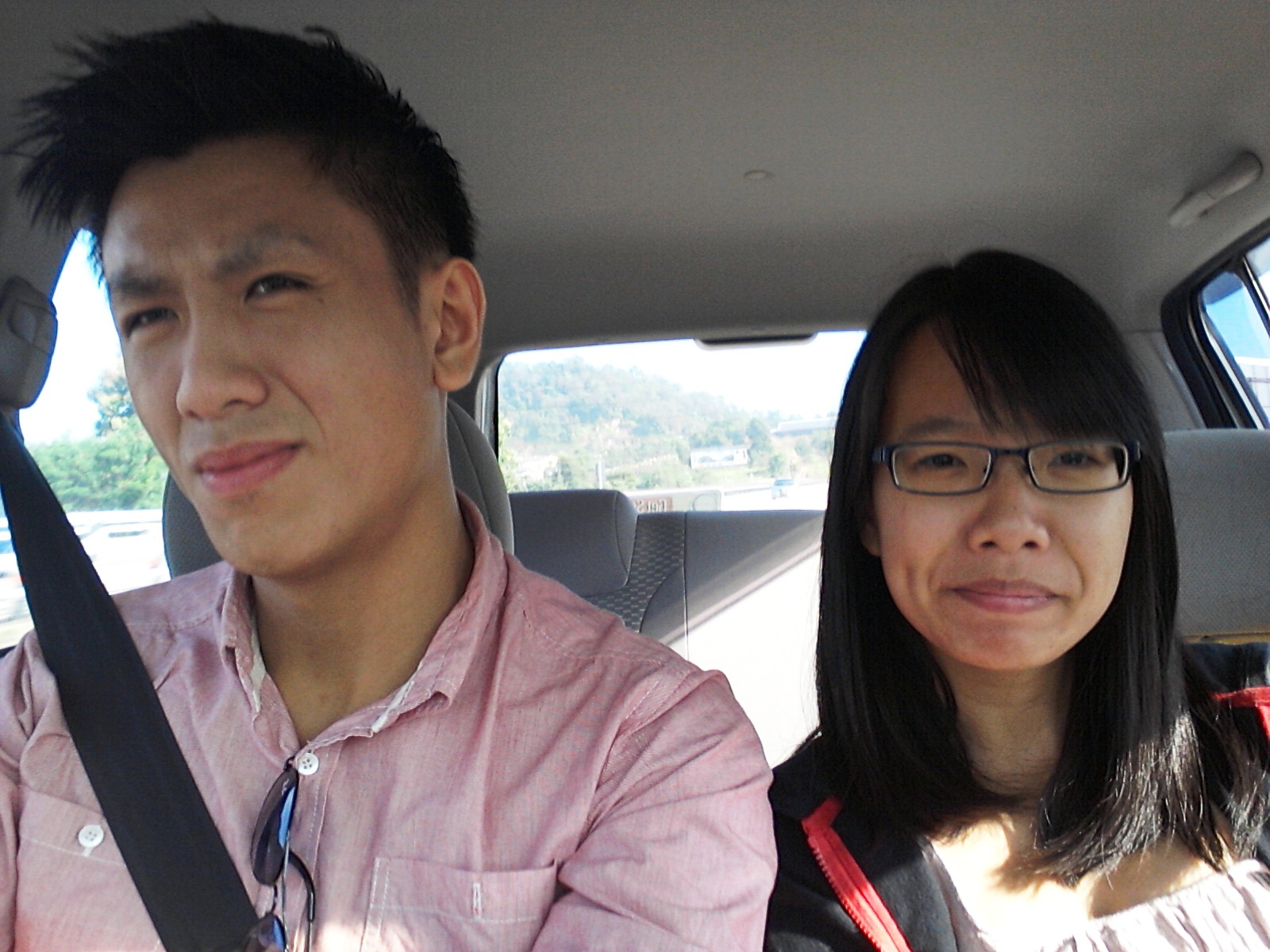 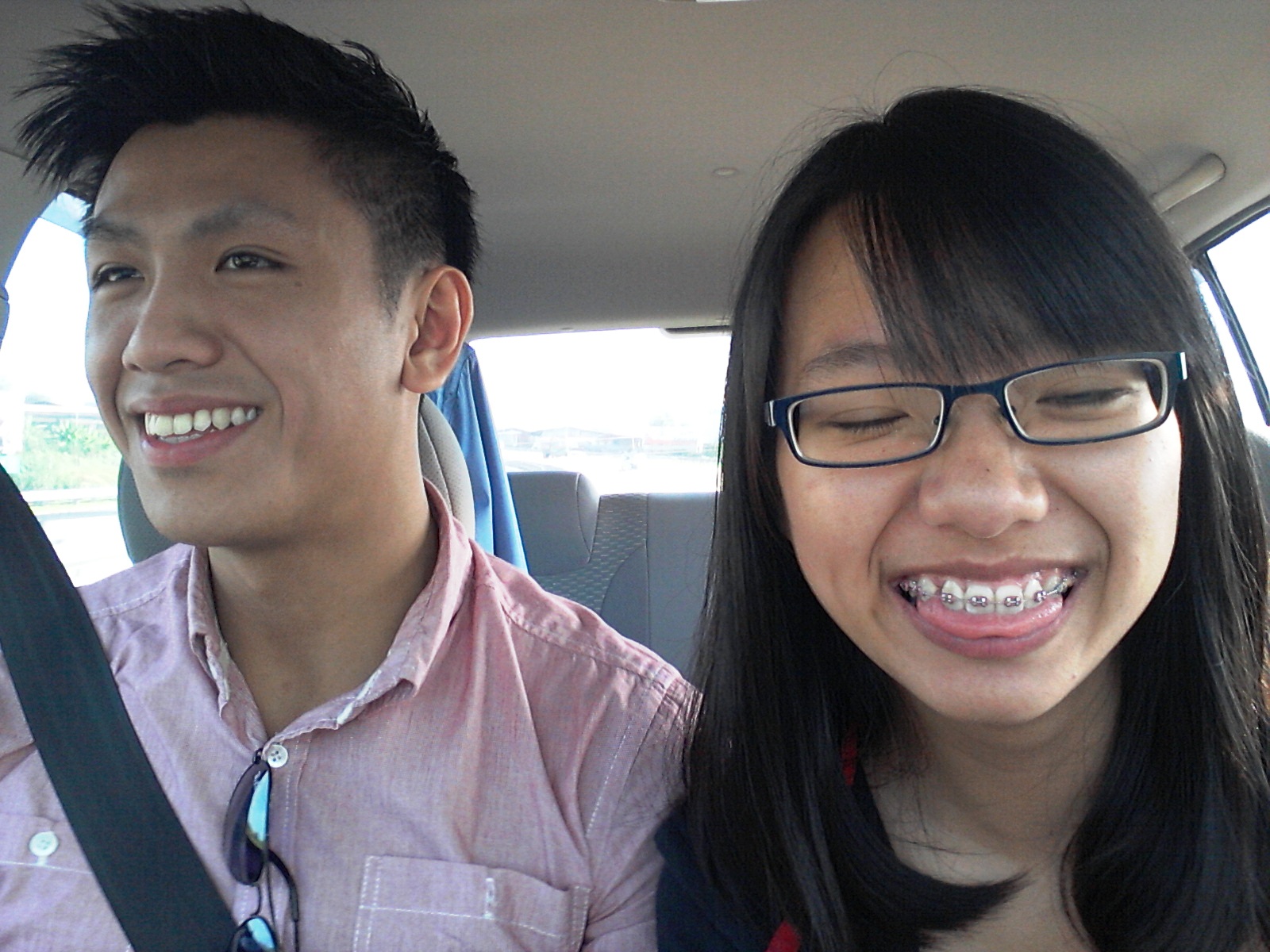 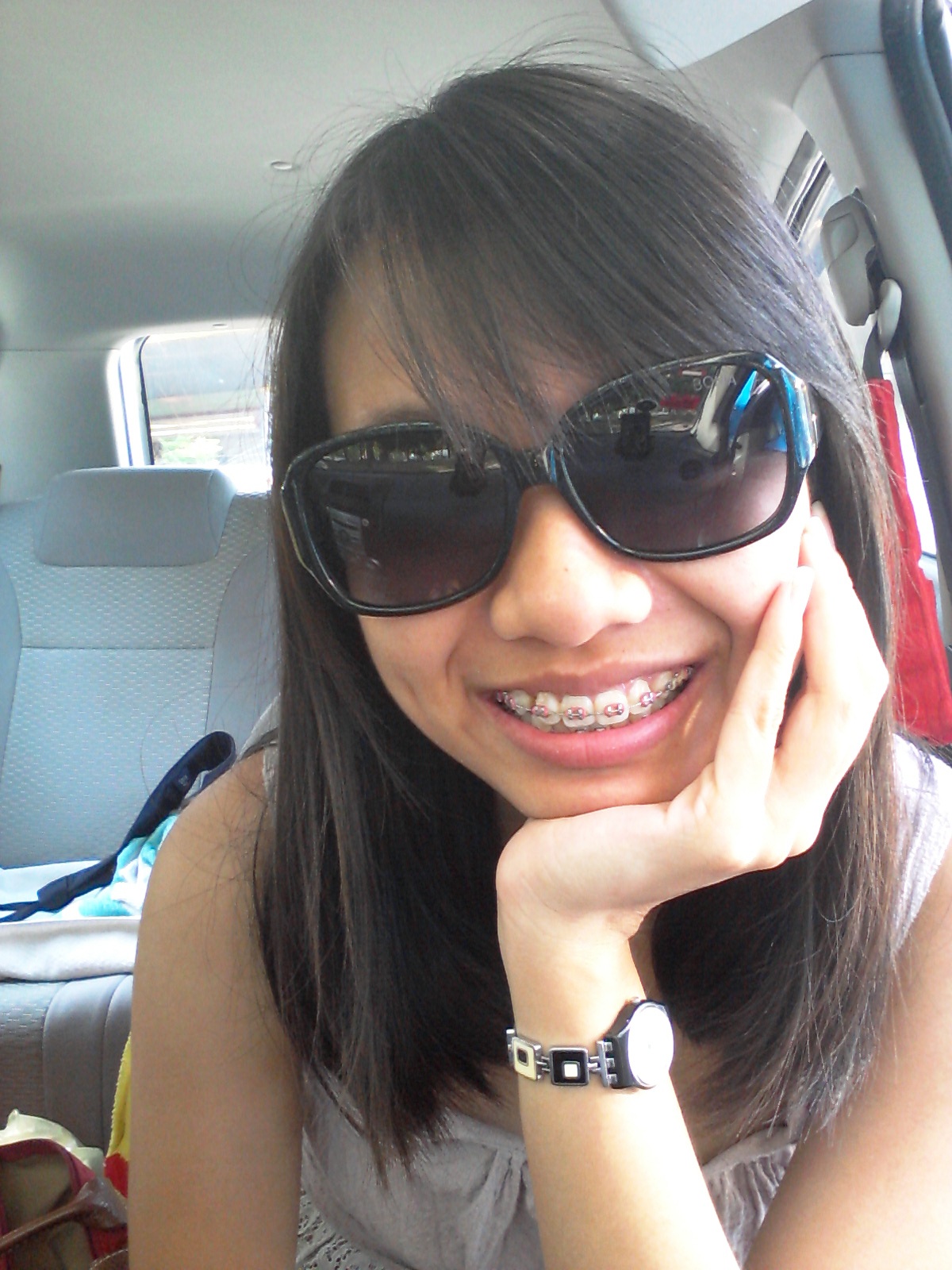 Oh and we stopped at Sungai Buloh to shower. Never in my entire life when I travel, I would take a bath at a rest stop or things like that. The boy really brings adventure and it was pretty fun. 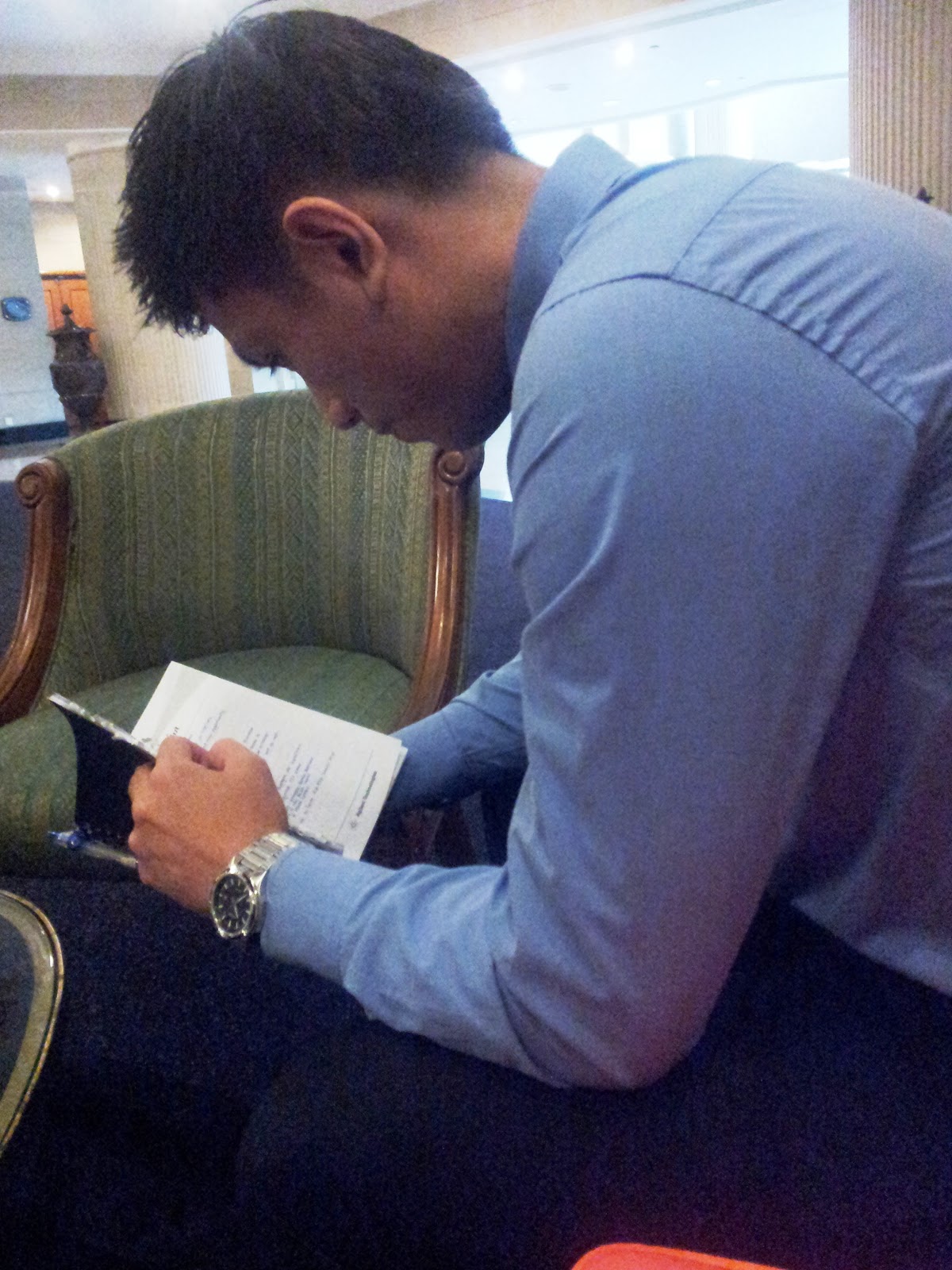 So, it's pretty expected that he would get a bit restless when we got into the hotel and waited like 3 hours for the whole thing to be over.

At one point as I was talking to him, he says to me, "Shhh you don't talk to me now. I very stress. You watch your series!" I straight burst out laughing, only to have other people who are also waiting to be interviewed looked at me.

I don't even know how to pray for him, I told him. Cos if he works in KL, that means we're hundreds of kilometres away from each other. Me and LDR, doesn't exactly go hand in hand.

But I told him that if that's what he really wanted and if that's a part of God's plan, of course i will have no choice but to work things out. 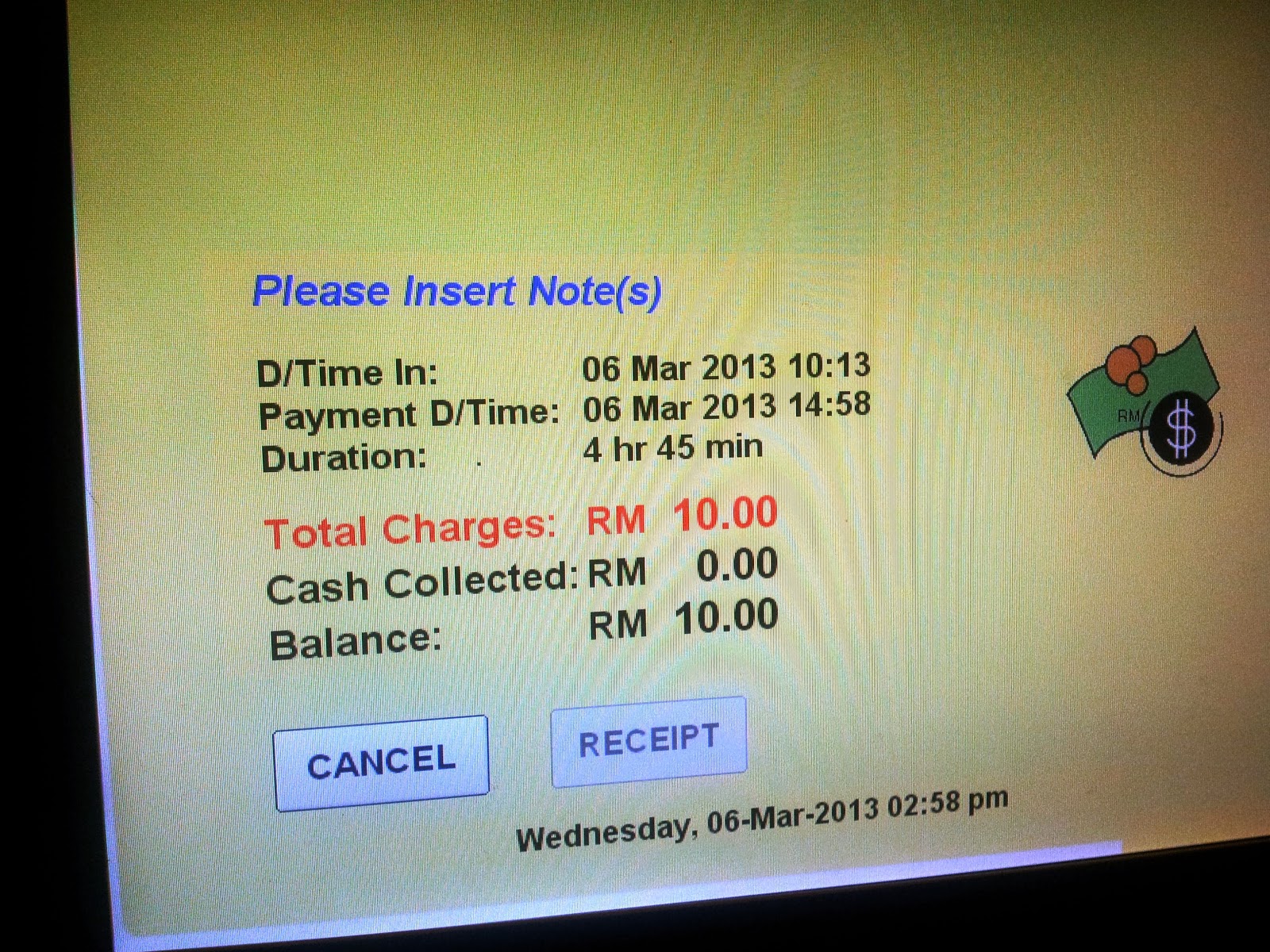 When it was all over, I could see a wide smile from his left ear to his right as he was walking towards me. And it's not because he was super happy with how it went. It was because he was "escaping" from a talk that they supposed to attend after the interview. So, if you were at the lobby, you would see two people "running" to the car park, looking all suspicious with giggles here and there.

Only KL slaughter people with their parking fees lo. Mad eh. Lose the ticket and penalty is RM25. Supposedly our fee was RM22, but hotel gave discount :)

After that, we went to meet up with his cousin and had dim sum. We had the most amazing delicious char siew pau. No kidding. It was so yummy! Oh and that was lunch for us.

We then decided to go KLCC since it's nearby and the moment we went into the underground car park, we knew that parking fees will for sure be two digits AGAIN.

Me: Never mind la. I don't want to walk too far. Not safe.
Him: True la.
Me: We're on holiday whatt. Money is not a problem. Hahaha.
Him: *straight poker face* 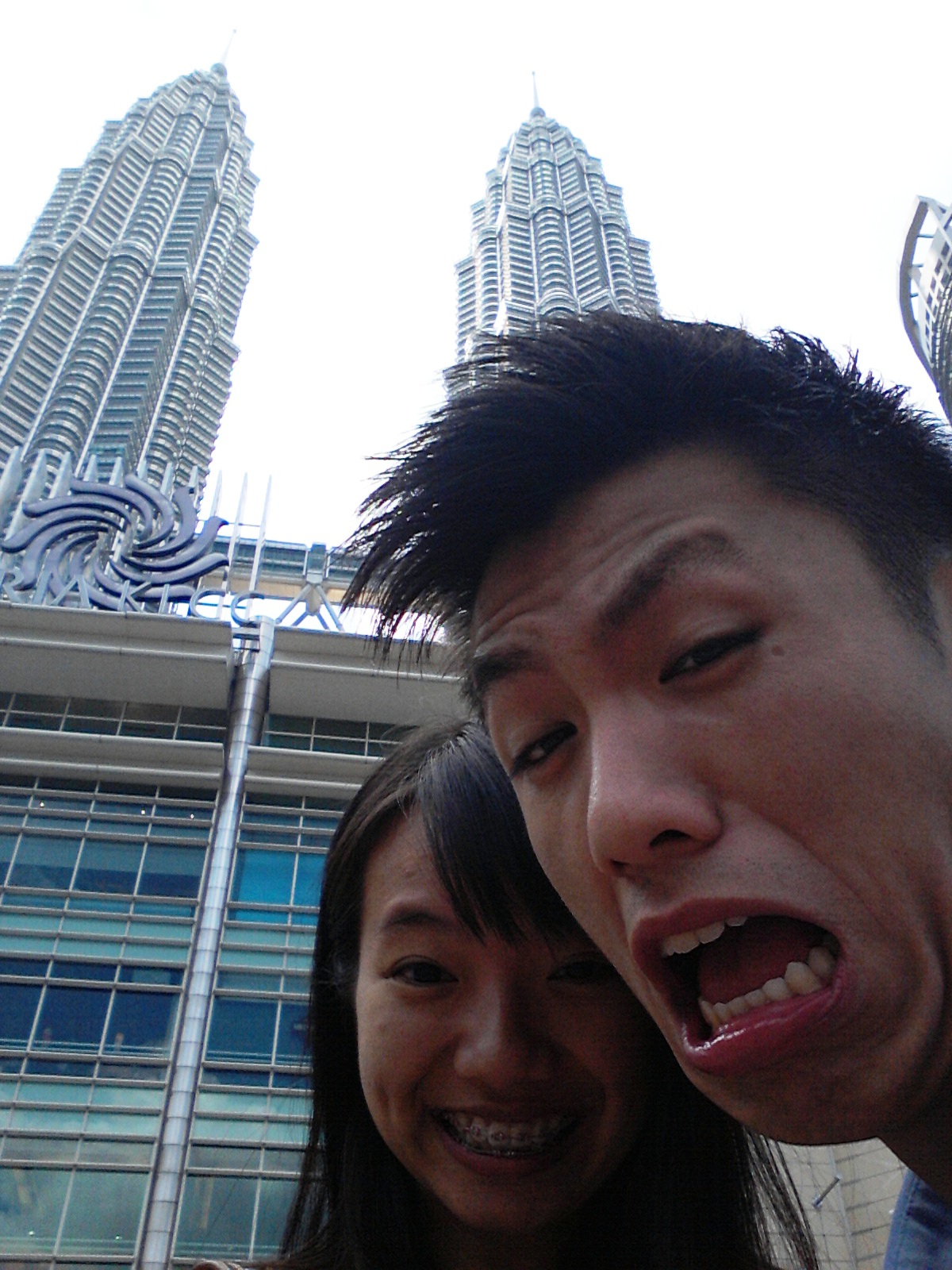 After walking around and having lots and lots of discussion, we decided to go up the Twin Tower. I have never been up there and I thought that it would be nice to be at such a place of great heights. For him not so much. He's afraid of heights. But he went in the end.

Many moments where I had to hold his hand tight. SO FUNNNY! Got one time I scared him from behind, and his face straight turned green.

For RM25, I think it was a bit too pricey. And considering that it was pretty hazy, it wasn't awesome wow view. I wouldn't pay to go up there again. For non Mykad holders, it's RM80! Mad expensive wei. But the Twin Tower very iconic and pretty la, especially when they are lighted up at night!

We wanted to go PetroSains but closed just 10 minutes before we arrived. Geram much. We did tried other things like what it really felt like being in a real earthquake and the boy speaking to a screen about nuclear power. More like scolding the screen. How can one person be more silly than this that I'm with? 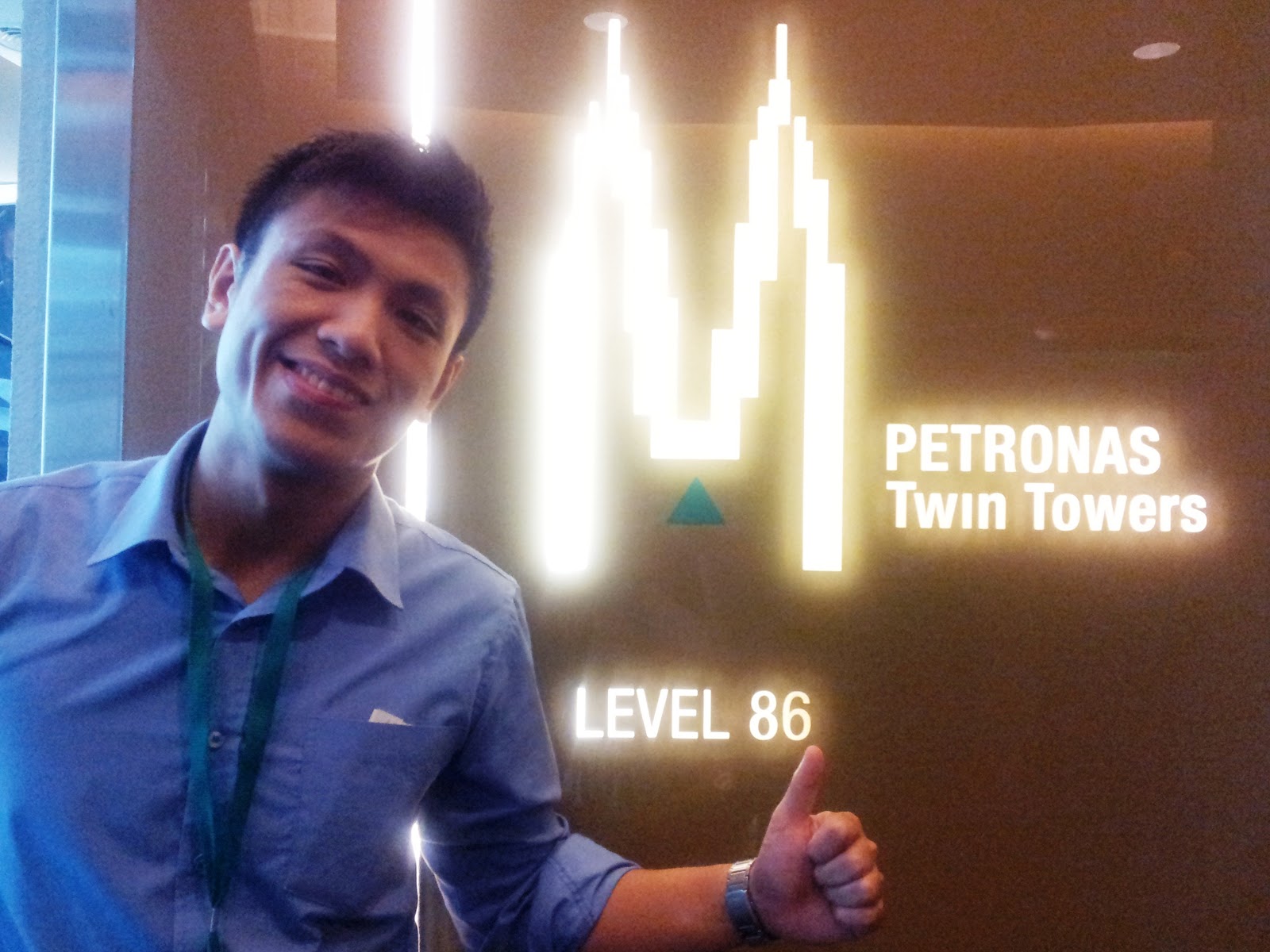 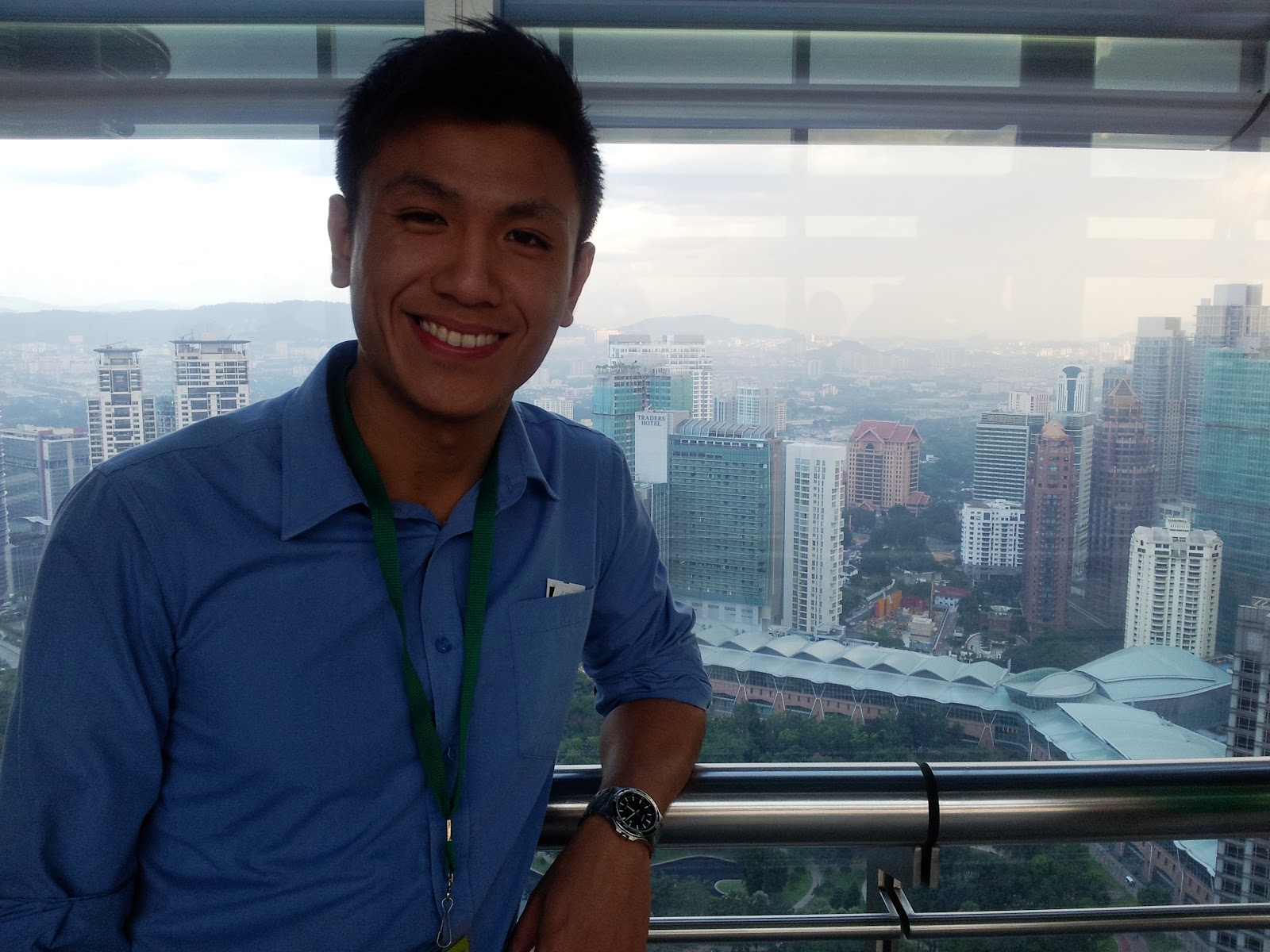 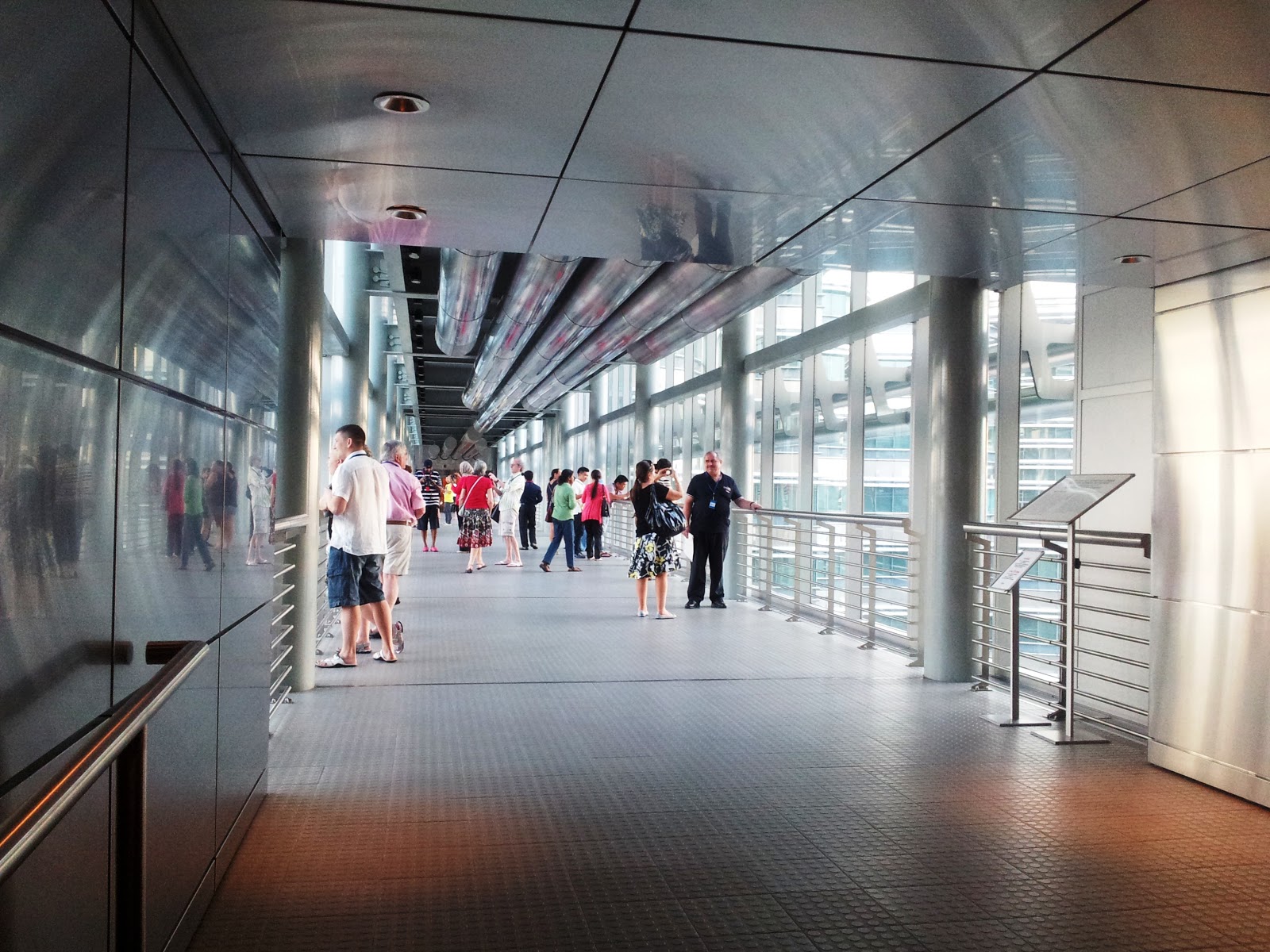 This part reminds me of the movie "The Tower" or something. The one about a Korean tower collapsed and killed many people. 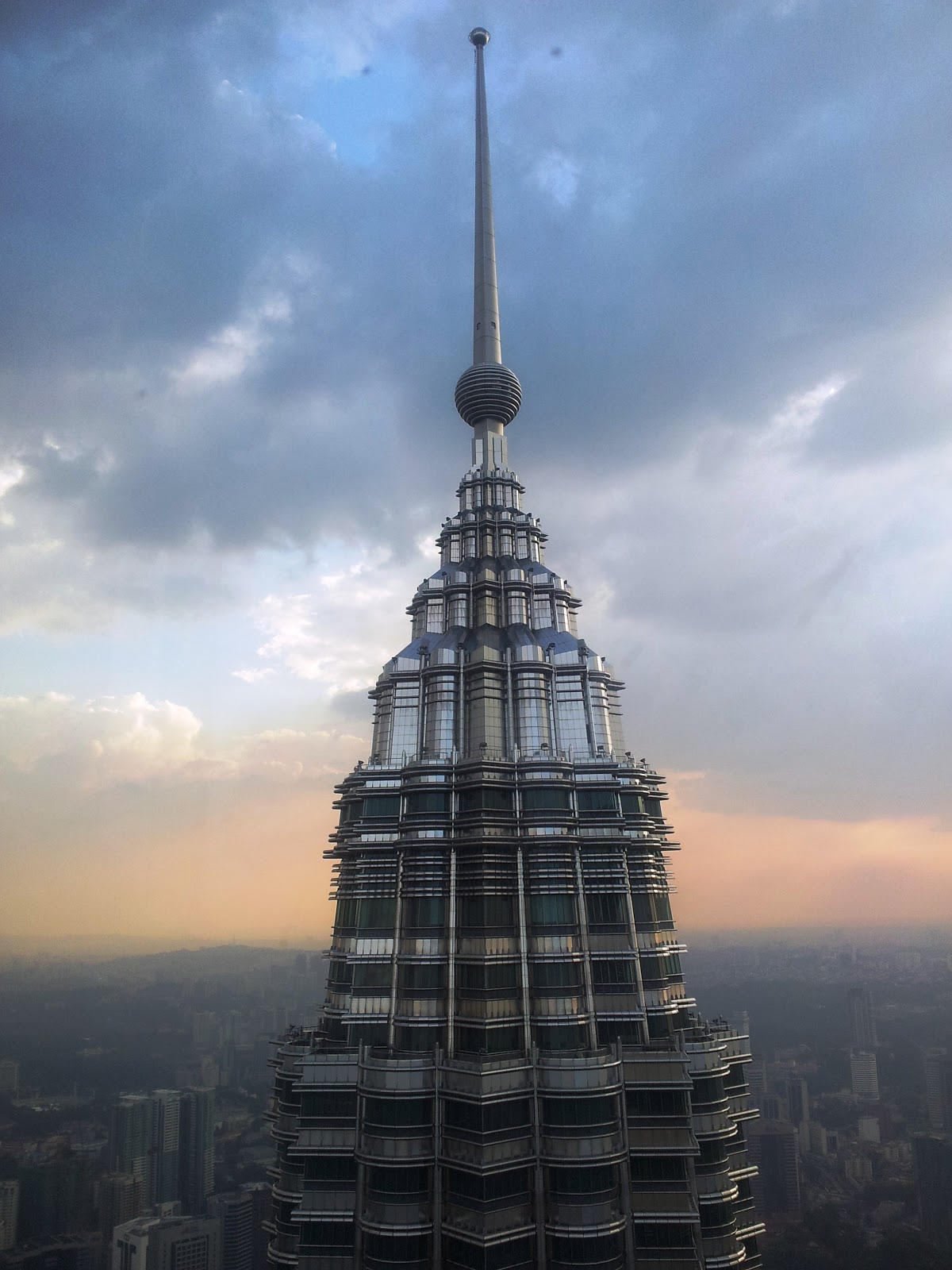 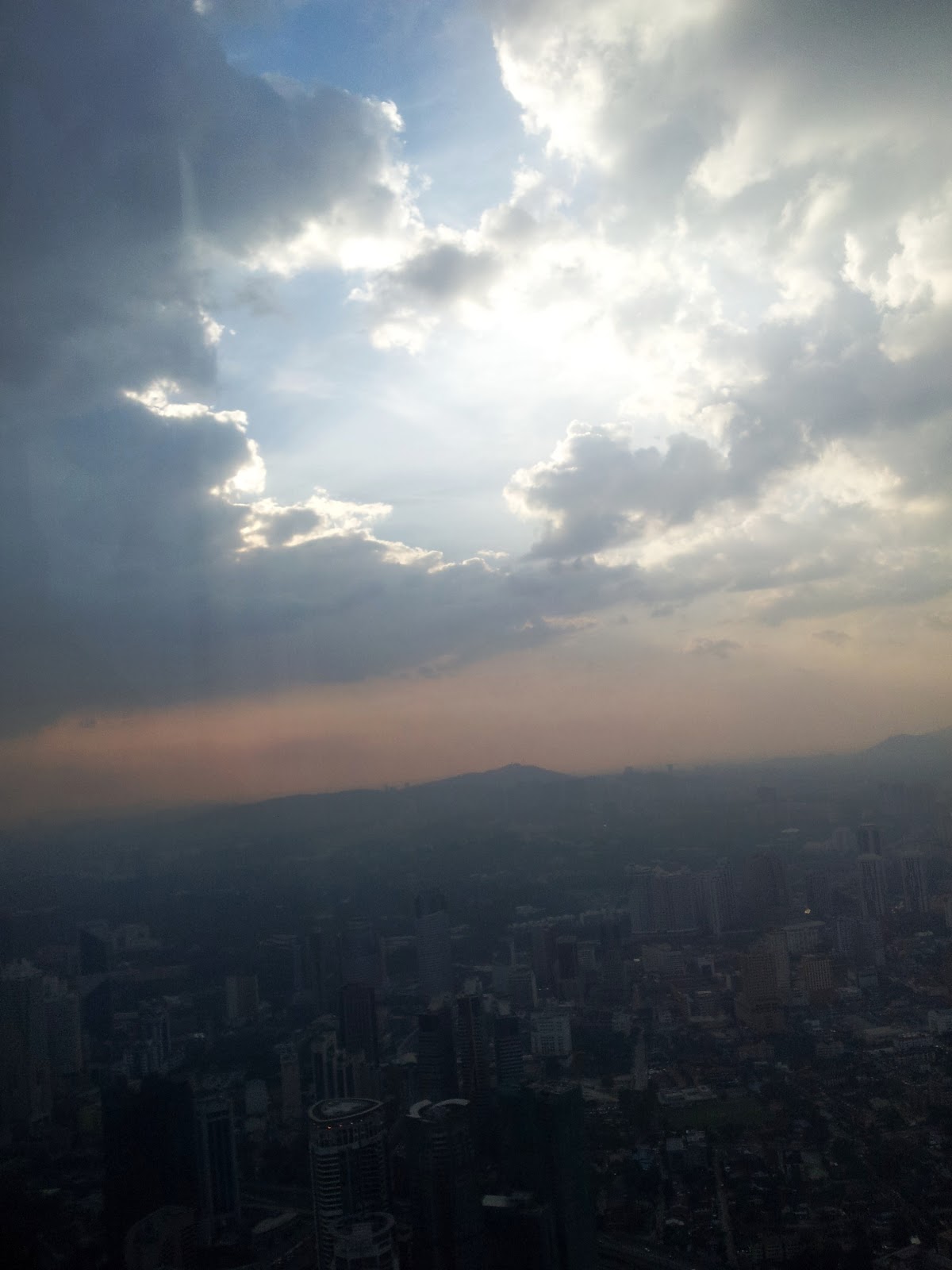 We took quite a qhile to decide on what to have for dinner cos KLCC have quite limited of reataurants I would say. I think Pavillion has more. Anyways, we walked up and down, left and right and finally settled for Yuzu. The Amazing Japanese Restaurant. I think it became our favorite Japanese Restaurant, immediately. Too bad our hps died when we wanted to take pictures and stuff. It was such a great time together, having an almost perfect meal.

We drove back to the island and made many stops. Too sleepy. We actually slept in Bukit/Batu Gantang's rest stop for like 30 minutes before pushing ourselves to finish the final lap. HORRIBLE. Next time, we take bus or we fly! Hahaha.

Definitely a day well spent with the boy :) 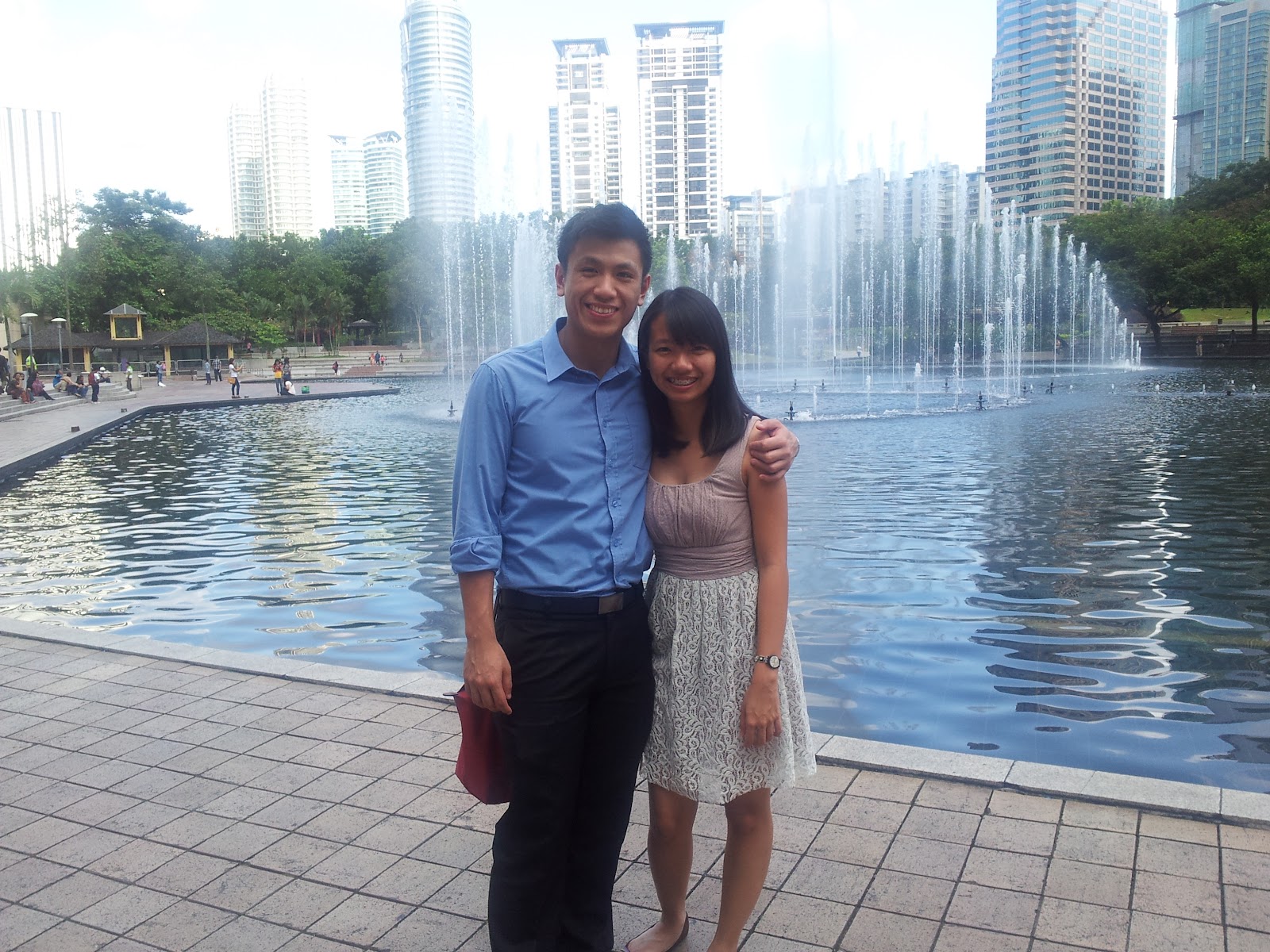